A Brief History of Islam (part 1 of 5): The Prophet of Islam

Description: The early life of the Prophet before his prophet-hood and a glimpse of his mission in Mecca. 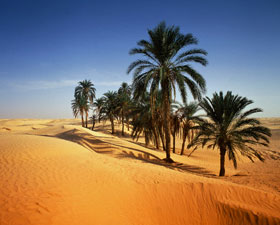 In or about the year 570 the child who would be named Muhammad and who would become the Prophet of one of the world’s great religions, Islam, was born into a family belonging to a clan of Quraish, the ruling tribe of Mecca, a city in the Hijaz region of northwestern Arabia.

Originally the site of the Kaabah, a shrine of ancient origins, Mecca had, with the decline of southern Arabia, become an important center of sixth-century trade with such powers as the Sassanians, Byzantines, and Ethiopians.  As a result, the city was dominated by powerful merchant families, among whom the men of Quraish were preeminent.

Muhammad’s father, “Abd Allah ibn” Abd al-Muttalib, died before the boy was born; his mother, Aminah, died when he was six.  The orphan was consigned to the care of his grandfather, the head of the clan of Hashim.  After the death of his grandfather, Muhammad was raised by his uncle, Abu Talib.  As was customary, the child Muhammad was sent to live for a year or two with a Bedouin family.  This custom, followed until recently by noble families of Mecca, Medina, Taif, and other towns of the Hijaz, had important implications for Muhammad.  In addition to enduring the hardships of desert life, he acquired a taste for the rich language so loved by the Arabs, whose speech was their proudest art, and also learned the patience and forbearance of the herdsmen, whose life of solitude he first shared, and then came to understand and appreciate.

About the year 590, Muhammad, then in his twenties, entered the service of a merchant widow named Khadijah as her factor, actively engaged with trading caravans to the north.  Sometime later he married her, and had two sons, neither of whom survived, and four daughters by her.

In his forties, he began to retire to meditate in a cave on Mount Hira, just outside Mecca, where the first of the great events of Islam took place.  One day, as he was sitting in the cave, he heard a voice, later identified as that of the Angel Gabriel, which ordered him to:

Three times Muhammad pleaded his inability to do so, but each time the command was repeated.  Finally, Muhammad recited the words of what are now the first five verses of the 96th chapter of the Quran - words which proclaim God to be the Creator of man and the Source of all knowledge.

At first Muhammad divulged his experience only to his wife and his immediate circle.  But, as more revelations enjoined him to proclaim the oneness of God universally, his following grew, at first among the poor and the slaves, but later, also among the most prominent men of Mecca.  The revelations he received at this time, and those he did later, are all incorporated in the Quran, the Scripture of Islam.

Not everyone accepted God’s message transmitted through Muhammad.  Even in his own clan, there were those who rejected his teachings, and many merchants actively opposed the message.  The opposition, however, merely served to sharpen Muhammad’s sense of mission, and his understanding of exactly how Islam differed from paganism.  The belief in the Oneness of God was paramount in Islam; from this all else follows.  The verses of the Quran stress God’s uniqueness, warn those who deny it of impending punishment, and proclaim His unbounded compassion to those who submit to His will.  They affirm the Last Judgment, when God, the Judge, will weigh in the balance the faith and works of each man, rewarding the faithful and punishing the transgressor.  Because the Quran rejected polytheism and emphasized man’s moral responsibility, in powerful images, it presented a grave challenge to the worldly Meccans.

Jazak Allah Khair. May Allah reward you and your team for your efforts. I have a miner comment. In my opinion History of Islam start with Prophet Adam(pbuh). I believe all Holy Prophets were Prophets of Islam. May Allah bless all of us. Fi Aman Allah

Mashallah, a very good site and this page is really interesting for those who want to have a better knoledge of the religion of Islaam.Also it's good use for those who do Islamic Studies in my country May Allah bless you all for the good job and make you always prosper

Truely, Truely, Islam is the best religion in the world.

Islam is a best teacher always

Ya Allah, Guide this person ^ The real religion is Islam. There is no god except Allah Muhammad is His last Messenger.

it is to become muslm

is a good article

May the Almighty Allah bless you all Amen

Islam Is The Greatest Religion In The World