The Slaughter of Livestock (part 2 of 4): Modern Techniques of Slaughtering

Description: A comparison between modern slaughtering techniques and the method mandated in Islam.  Part 2: A look into the modern techniques used in slaughtering and whether it fits the criteria of humane.

Critics of Islamic and similar Jewish procedures in slaughtering animals oppose the fact that 1902 (a) is not implemented, which calls, though optionally, that animals be stunned before their throats be cut.  This is based on the claim that stunning renders the animal insensible to pain, although the more favorable opinion is that it renders the animal easier to control in mass factory-like slaughter houses.  Some modern means of stunning are the following: 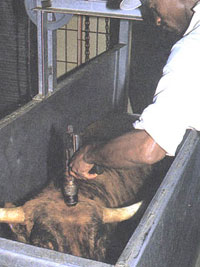 ·        Concussion stunning.  A mechanically operated instrument delivers a blow to the brain and concusses the brain.  Used for cattle, sheep, calves, rabbits.

·        Free bullets.  Used for animals difficult to handle such as wild pigs, bison, deer, horses or in emergencies.

After stunning animals may be pithed, involving inserting a rod into the cavity made by the bolt to destroy the lower portion of the brain and the upper spinal cord.  In all these methods, unconsciousness is caused either by penetration of the skull which causes brain damage or by causing a concussive blow to the brain without penetration.  After stunning the animal undergoes sticking which cuts off the blood supply to the brain.  After animals are stunned and stuck, they are bled, and it is the bleeding that causes death.  The industry requires that the heart should remain beating as long as possible after sticking to ensure that as much blood as possible is removed from the flesh and blood vessels.  This apparently maintains the quality of the meat and its keeping potential.

·        Head-Only Stunning: Cattle, sheep, goats and ostriches are all stunned using this method.  The technique involves the application of a pair of electric tongs on either side of the animal’s head.  An electric current is then passed 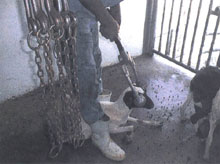 through the brain and this supposedly leads to the temporary loss of consciousness. 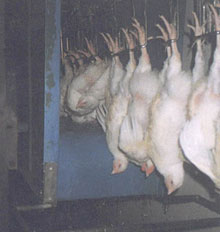 This is a widely used method of stunning for chickens, turkeys, geese and ducks.  In this method, birds are shackled upside-down on a moving conveyor belt that takes them to the electric water bath.  The birds’ heads are to supposedly be immersed in this water causing their electrocution.  In recent years, the strength of the electric current has been raised to ensure the death of the birds by cardiac arrest.

Birds may be stunned using CO2 and Argon gas while they remain in their crates.  Pigs are also gassed using CO2.

In this method a knife is stuck into the animal’s throat or neck causing brain death from the rapid loss of blood supply to the brain.

Does the Animal Feel Pain in This Method?

Studies have shown that stunning the animal with the mentioned techniques put the animal through unnecessary pain.  Concerning CBP, the study at the German University showed the following result for stunned animals:

1.    The animals were apparently unconscious soon after stunning.

3.    The hearts of the animal stunned by CBP stopped beating earlier as compared to those of the animals slaughtered according to the Halal method resulting in the retention of more blood in the meat.  This in turn is unhygienic for the consumer.

Although the animals were rendered unconscious, they felt severe pain from the stunning, a factor not present in the Islamic manner.