The Slaughter of Livestock (part 1 of 4): The Islamic Method of Slaughtering

Description: A comparison between modern slaughtering techniques and the method mandated in Islam.  Part 1:  A look into the prescribed means to render an animal Islamicly acceptable to eat, and whether it may be considered as cruelty to animals. 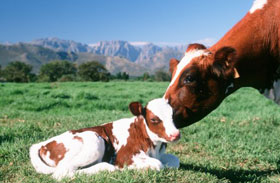 Although much less complicated and tedious that Jewish Keshrut, or Jewish dietary laws, Islam does legislate certain rules and regulation in regards to diet.  All legislations which deal with this worldly life in Islam are based upon the precept of maximizing benefits and reducing harm, and if the harm of anything exceeds the benefits that might be gained from it, it is generally prohibited in Islam.  God says:

“They ask you about wine and gambling.  Say: In them is much sin, and also some benefit for people.  But its sin is greater than its benefit...” (Quran 2:219)

For this reason, Islam has mandated certain observances in regards to the slaughter of animals to benefit from their meat, and these mandates are legislated due to an intrinsic harm which would result if they were not to be followed, most of which deal with health, as well as alleviating pain inflicted upon the animal.

The Islamic Method of Slaughtering

One of the main legislations in regards to the permissibility of meat is that it must be slaughtered according to the mandates of the religion.  Forbidden is any type of animal if it dies of natural cause, strangulation, due to a violent blow, a headlong fall, by the goring of horns, and that which has been partially eaten by wild animals.  Rather, in order for meat to be made permissible to eat, it must be slaughtered by a cut through the neck, reaching through the trachea, esophagus, the jugular veins and carotid arteries, without severing the spinal cord.

This method is indeed the most humane method to slaughter an animal to make use of its meat.  This is also the only method endorsed by the congress of the United States of America, as mentioned in section 1901 and 1902 (b), Chapter 48, Title 7, in which is written the following:

No method of slaughtering or handling in connection with slaughtering shall be deemed to comply with the public policy of the United States unless it is humane.  Either of the following two methods of slaughtering and handling are hereby found to be humane:

(a)  in the case of cattle, calves, horses, mules, sheep, swine, and other livestock, all animals are rendered insensible to pain by a single blow or gunshot or an electrical, chemical or other means that is rapid and effective, before being shackled, hoisted, thrown, cast, or cut; or

(b)  by slaughtering in accordance with the ritual requirements of the Jewish faith or any other religious faith that prescribes a method of slaughter whereby the animal suffers loss of consciousness by anemia of the brain caused by the simultaneous and instantaneous severance of the carotid arteries with a sharp instrument and handling in connection with such slaughtering.[1]

As can be seen above, this method of slaughtering ensures the least amount of pain is felt by the animal at the same time rendering the meat safe to eat.  The swift cutting of vessels of the neck disconnects the flow of blood to the nerves in the brain responsible for pain, and thus the animal does not feel pain.  The movements and withering that happen to the animal after the cut is made are not due to pain, but due to the contraction and relaxation of the muscles deficient in blood.  This movement is also essential in forcing the maximum amount of blood from the body, which is extremely important in order to purify the meat, as remaining blood acts as a medium for microorganisms, in addition to meat remaining fresher for a longer period of time.  Also crucial to this factor is the severance of the trachea, esophagus, and the jugular veins in conjunction with the carotid arteries, which cause a rapid gush of blood to flow from the system.  Severance of the spinal cord, however, may lead to cardiac arrest, causing the stagnation of blood in the blood vessels due to the damage of nerve fibers leading to the heart.

Does the Animal Feel Pain in This Method?

In a study entitled Attempts to Objectify Pain and Consciousness in Conventional (captive bolt pistol stunning) and Ritual (halal, knife) Methods of Slaughtering Sheep and Calves’, carried out by Professor Wilhelm Schulze and his colleague Dr. Hazim at the School of Veterinary Medicine, Hanover University, Germany, several electrodes were surgically implanted at various points of the skull of all animals, touching the surface of the brain.  After the animals were allowed to recover for several weeks, some animals were slaughtered in the Islamic manner mentioned previously, by the cutting of the trachea, esophagus, the jugular veins and carotid arteries.  Other animals were stunned first before slaughtering.  During the experiment, an electroencephalograph (EEG) and an electrocardiogram (ECG) recorded the condition of the brain and the heart of all animals during the course of slaughter and stunning.  The following results were recorded:

1.    The first three seconds from the time of Islamic slaughter as recorded on the EEG did not show any change from the graph before slaughter, thus indicating that the animal did not feel any pain during or immediately after the incision.

2.    For the following 3 seconds, the EEG recorded a condition of deep sleep - unconsciousness.  This is due to the large quantity of blood gushing out from the body.

3.    After the above-mentioned 6 seconds, the EEG recorded zero level, showing no feeling of pain at all.

4.    As the brain message (EEG) dropped to zero level, the heart was still pounding and the body convulsing vigorously (a reflex action of the spinal cord) driving a maximum amount of blood from the body thus resulting in hygienic meat for the consumer.

Next: The Slaughter of Livestock (part 2 of 4): Modern Techniques of Slaughtering