Is the Quran Anti-Semitic? (part 1 of 2): The Semites, a Chosen People

Description: A look into the claim that the Quran, Islam and thus Muslims are anti-Semitic. Part 1: The designation of the Semitic race and the favorable position of the Jews with God. 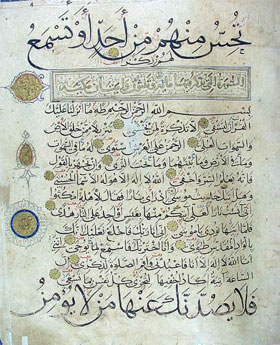 There is a huge cry these days by certain groups claiming that the Quran is anti-Semitic, even leading to certain of its translations being banned in various school districts in the United States of America.[1]  We read about the definition of anti-Semitism in the Jewish Encyclopedia:

One will immediately realize from this statement that the Quran is not at all anti-Semitic, and that the verses which do reprimand the Jews are specific to certain transgressions they made in regards to their religion, and not in regard to their racial origin.

Who are the Semites?

Biblically, the most general designation of the Semites are all the descendants of Shem, one of the three sons of Noah, either the first or the last in conflicting opinions of biblical scholars, but always the first mentioned.[3]  It was in the house of Shem were the Shekinah[4]  was to dwell, and he is singled out with much other praise and blessings in the Bible. “…it is clear that, according to the Biblical classification, the Arabs, Babylonians, Assyrians, Arameans, and Hebrews were regarded as Semites, or the descendants of Shem.”[5]  Modern scholars, placing greater emphasis on language derivation, include Abyssinians, Phenicians, Canaanites, Hebrews, Moabites, and Edomites to those mentioned before.

In whichever context we discuss the subjects, the Arabs, like the Hebrews (and thus Jews), are clearly Semites as well.  Thus to say that the Quran is anti-Semitic is to say that the Quran makes the entire Semitic race inferior others, and that would include Arabs as well, something improbable as God favored both these nations with Prophets.

In rabbinical texts of the Jews, the priesthood of Shem is transferred to Abraham, and it is from this transference of priesthood that the Jews take themselves to be the chosen people and claim ownership of the lands of Canaan, in which lies present day Palestine.  As they claim the Shekinah to have transferred to Abraham and his progeny, specifically Isaac, and thus the Semitic preference of God is specific to them, and more specifically the Israelites, the progeny of Israel, also known as Isaac, son of Abraham.

The Semites, “A Chosen People”

Rather than rendering the Israelites as being an inferior race, the Quran affirms their favorable position amongst humanity.  This is due to the immense sacrifices of Abraham and his invocations to God to make prophets from his progeny that God had chosen his children as the receptacles of Prophecy.  Abraham called to his Lord:

“And We bestowed upon him (Abraham) Isaac and Jacob, each of them We guided, and before him, We guided Noah, and among his progeny David, Solomon, Job, Joseph, Moses, and Aaron.  Thus do We reward the good doers.  And Zachariah, and John and Jesus and Elias, each one of them was of the righteous.  And Ishmael and Elisha, and Jonah and Lot, and each one of them We preferred above all the worlds.  And also some of their fathers and their progeny and their brethren, We chose them, and We guided them to a Straight Path.  This is the Guidance of God with which He guides whomsoever He will of His slaves.  But if they had joined in worship others with God, all that they used to do would have been of no benefit to them.  They are those whom We gave the Book, the Understanding, and Prophethood…” (Quran 6:83-87)

The Israelites are a chosen people, because God chose to raise prophets amongst them.  The Quran in numerous places recognizes this favor and reminds the Israelites of it.

“O Children of Israel (the Israelites), remember and mention the favor which I bestowed upon you, and that I favored you amongst all the worlds.” (Quran 2:47, 2:122)

“And indeed We gave the Children of Israel (the Israelites) the Scripture, and the understanding of the Scripture and its laws, and the Prophethood; and provided them with good things, and preferred them above all the worlds.” (Quran 45:16)

God favored them with numerous blessings in addition to the Prophets, such as providing them heavenly food, called manna and salwaa.[6]

“O Children of Israel (the Israelites)!  We delivered you from your enemy, and We made a covenant with you on the right side of the Mount, and We sent down to you Manna and quails (salwaa).” (Quran 20:80)

God saved them from the savagery of Pharaoh by sending to them Moses, who led  them across the Red Sea to inhabit the “Blessed Land” of Canaan.

“And We made the people who were considered weak to inherit the eastern parts of the land and the western parts thereof which We have blessed.  And the fair Word of your Lord was fulfilled for the Children of Israel (the Israelites), because of their endurance.  And We destroyed completely all the great works and buildings which Pharaoh and his people erected.” (Quran 7:137)

“Indeed God took the covenant from the Children of Israel (Jews), and We appointed twelve leaders among them.  And God said: “I am with you if you establish the prayer and offer the Zakat (compulsory charity) and believe in My Messengers; honor and assist them, and lend to God a good loan.  Verily, I will remit your sins and admit you to Gardens under which rivers flow (in Paradise).  But if any of you after this, disbelieved, he has indeed gone astray from the Straight Path.” (Quran 5:12)

[4] A word denoting the “presence of God”, about which Biblical scholars have differed much over its exact reality.  Shekinah. Kaufmann Kohler, Ludwig Blau. The Jewish Encyclopedia (http://www.jewishencyclopedia.com/view.jsp?artid=588&letter=S).

Next: Is the Quran Anti-Semitic? (part 2 of 2): Abiding by the Covenant