Spread of Islam in West Africa (part 1 of 3): The Empire of Ghana

Description: How Islam spread into sub-Saharan region of West Africa, and the great civilizations it established there, taking its inhabitants out of paganism to the worship of One God.  Part 1: Islam reaches West Africa, and a history of the Islamic Empire of Ghana. 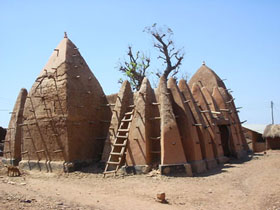 Muslim geographers and historians have provided excellent records of Muslim rulers and peoples in Africa.  Among them are Al-Khwarzimi, Ibn Munabbah, Al-Masudi, Al-Bakri, Abul Fida, Yaqut, Ibn Batutah, Ibn Khaldun, Ibn Fadlallah al-’Umari, Mahmud al-Kati, Ibn al Mukhtar and Abd al-Rahman al-Sa’di.  Islam reached the Savannah region in the 8th Century C.E., the date the written history of West Africa begins.  Islam was accepted as early as 850 C.E.  by the Dya’ogo dynasty of the Kingdom of Tekur.  They were the first Negro people who accepted Islam.  Trade and commerce paved the way for the introduction of new elements of material culture, and made possible the intellectual development which naturally followed the introduction and spread of literacy.

Eminent Arab historians and African scholars have written on the empires of Ghana, Mali, Songhay, and Kanem Bornu.  They document famous trade routes in Africa - from Sijilmasa to Taghaza, Awdaghast, which led to the empire of Ghana, and from Sijilmasa to Tuat, Gao and Timbikutu.  Al-Bakri describes Ghana as highly advanced and economically a prosperous country as early as the eleventh century.  He also discusses the influence of Islam in Mali in the 13th century and describes the rule of Mansa Musa, whose fame spread to Sudan, North Africa and up to Europe.

Spread of Islam in West Africa

Islam reached the Savannah region in the 8th Century C.E., the date the written history of West Africa begins The Muslim-Arab historians began to write about West Africa in the early 8th century.  The famous scholar Ibn Munabbah wrote as early as 738 C.E., followed by Al-Masudi in 947 C.E.  As Islam spread in the Savannah region, it was quite natural that commercial links should also come to be established with North Africa.  Trade and commerce also paved way for the introduction of new elements of material culture, and made possible the intellectual development which naturally followed the introduction and spread of literacy, and for which parts of the Sudan were to become famous in the centuries to come.  In the Kingdom of Tekur, situated on both banks of the Senegal, Islam was accepted as early as 850 C.E., by the Dya’ogo dynasty.  This dynasty was the first Negro people who accepted Islam.

It was for this reason that Muslim-Arab historians referred to Bilad al-Tekur as ‘The Land of the Black Muslims.’  War-jabi, son of Rabis, was the first ruler of Tekur in whose reign Islam was firmly established in Tekur and the Islamic Shari’ah system was enforced.  This gave a uniform Muslim law to the people.  By the time the Al- Murabitun of Almoravids began their attack on Tekur in 1042 C.E., Islam had made a deep impact on the people of that area.  Al-Idrisi in 1511 described the Tekur Country as ‘secure, peaceful and tranquil.’  The capital town of Tekur was also called Tekur which had become center of commerce.  Merchants used to bring wool to sell there from Greater Morocco and in return, took with them gold and beads.

We have enough documents about the history of this region since it was known to the Arab historians as the Bilad al-Sudan, the land of the Blacks.  In the medieval period, the most well-known empires that grew there are known until our day: The empires of Ghana, Mali, Songhay, and Kanem Bornu.  Eminent Arab historians have written about the glories of these lands, notable among whom are Al-Bakri, Al-Masudi, Ibn Batutah and Ibn Khaldun.  Besides these scholars, there were local scholars whose works have come down to us.  As for example Tarikh al-Sudan, the History of the Sudan, by Al-Sadi and Tarikh al-Fattash by Muhammad al-Kati.

There were famous trade routes, like the one from Sijilmasa to Taghaza, Awdaghast, which led to the empire of Ghana, and another from Sijilmasa to Tuat, Gao and Timbikutu.  There were others which connected the present Nigeria with Tripoli via Fez to Bornu and Tunisia with Nigeria via Ghadames, Ghat, and Agades to Hausa land.  These routes had made all the above mentioned places famous trade centers.  These centers of trade invariably became centers of Islamic learning and civilization.  New ideas came through visiting traders in the field of administrative practices.  We shall study briefly the expansion of Islam in each of the ancient empires of Western Sudan.

Islam in the Ancient Empire of Ghana

Al-Bakri, the Muslim geographer, gives us an early account of the ancient Soninke empire of Ghana.  His Kitab fi Masalik wal Mamalik (The Book of Roads and Kingdoms) describes Ghana of 1068 as highly advanced.  Economically, it was a prosperous country.  The King had employed Muslim interpreters and most of his ministers and treasurers were also Muslims.  The Muslim ministers were learned enough to record events in Arabic and corresponded, on behalf of the king, with other rulers.  "Also, as Muslims, they belonged to the larger body politic of the Islamic world and this would make it possible to establish international relations."

Al-Bakri gives the following picture of Islam in Ghana in the 11th century:

The city of Ghana consists of two towns lying on a plain, one of which is inhabited by Muslims and is large, possessing 12 mosques one of which is congregational mosque for Friday prayers: each has its Imam, Muezzin and paid reciters of the Quran.  The town possesses a large number of jurists, consults and learned men.

Next: Spread of Islam in West Africa (part 2 of 3): The Empires of Mali and Songhay

assalam alikum ALHAMDUALLAH IM A MUSLIM AND PROUD TO BE A MUSLIM THIS SITE HELPS ME TO INCREASE MY KNOWLEGDE ABOUT HISTORY OF ISLAM. I HAVE ADMIRE YOUR WORK MAY ALLAH GIVES U LOT OF SUCCESS AMEEN (PRAY 4 UMAT_E_MUSLIMA ) FOREVER. ALLAH HAFIZ

recommended as well as satisfied book to me