The Story of Abraham (part 7 of 7): The Building of a Sanctuary

Description: Abraham again visits his son Ishmael, but this time to fulfill a momentous task, the building of a House of Worship, a sanctuary for all of humanity.

Abraham and Ishmael Build the Kaaba

After a separation of several years, again the father and son met.  It was on this journey that the two built the Kaaba on God’s command as a permanent sanctuary; a place laid for the worship of God.  It was here, in this same barren desert where Abraham had left Hagar and Ishmael earlier, that he supplicated to God to make it a place where they would establish the prayer, free from idol worship.

"My Lord!  Make safe this territory, and preserve me and my sons from worshipping idols.  My Lord!  Lo!  They have led many of people astray.  But whoever follows me, he verily is of me.  And whoever disobeys me, still You are Forgiving, Merciful.  Our Lord!  Lo!  I have settled some of my posterity in an uncultivable valley near to Your Holy House, our Lord!  That they may establish proper worship; so incline some hearts of men that they may yearn toward them, and provide You them, with fruits in order that they may be thankful.  Our Lord!  Lo!  You know that which we hide and that which we proclaim.  Nothing in the earth or in the heaven is hidden from God.  Praise be to God Who has given me, in my old age, Ishmael and Isaac!  Lo!  My Lord is indeed the Hearer of prayer.  My Lord!  Make me establish regular prayer, and some of my posterity (also), our Lord!  And accept my prayer.  Our Lord!  Forgive me and my parents and believers on the Day when the account is cast." (Quran 14:35-41)

Now, years later, Abraham again in reunion with his son Ishmael, were to establish the honored House of God, the center of worship,  to which direction people would their face when offering prayers, and make it a site of pilgrimage.  There are many beautiful verses in the Quran describing the sanctity of the Kaaba and the purpose of its building.

"And when we assigned to Abraham the place of the House: ‘Do not associate with Me anything, and purify My House for those who circumambulate it, who stand in prayer, and who bow, and prostrate themselves (all in prayer).’  And proclaim the Pilgrimage (Hajj) among people, and they shall come to you on foot, and on every lean camel.  They shall come to you from every deep and distant mountain highways." (Quran 22:26-27)

"And when We made the House (the Kaaba) a resort for mankind and sanctuary, (saying): Take as your place of worship the place where Abraham stood (to pray).  And We took a covenant with Abraham and Ishmael that they should purify My House (the Kaaba) for those who compass it round, devote themselves (to worship) in it, or bow, or prostrate themselves (therein in prayer)." (Quran 2:125)

The Kaaba is the first place of worship appointed for all of humanity for the purpose of guidance and blessing:

"Indeed the first House (of worship) appointed for humanity is that at Bakka: Full of blessing and of guidance for all the worlds.  In it are Signs Manifest; (such as), the Station of Abraham; whoever enters it attains security; Pilgrimage thereto is a duty men owe to God,- those who have the ability." (Quran 3:96-97)

Prophet Muhammad , may the mercy and blessings of God be upon him, said:

"Indeed this place has been made sacred by God the day He created the heavens and the earth, and it will remain so until the Day of Judgment." (Saheeh Al-Bukhari, Saheeh Muslim)

The Prayers of Abraham

Indeed, the building of a sanctuary to be held by all latter generations was one of the best forms of worship men of God could do.  They invoked God during their feat:

"And (remember) when Abraham said, "My Lord, make this city (Mecca) a place of security and provide its people with fruits, such of them as believe in God and the Last Day..." (Quran 2:126)

"And raise up in their midst a Messenger from among them who shall recite to them Your revelations, and shall instruct them in the Scripture and in wisdom and shall purify them of their sins.  Lo!  You, only You, are the Mighty, the Wise." (Quran 2:129) 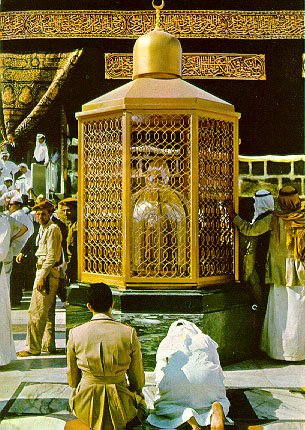 The Kaabah built by Abraham and Ishmael and the Station of Abraham, which houses the footprint of Prophet Abraham.

Abraham’s prayer for a Messenger was answered several thousand years later when God raised Prophet Muhammad among the Arabs, and as Mecca was chosen to be a sanctuary and House of Worship for all humanity, so too was the Prophet of Mecca one sent to all humanity.

It was this pinnacle of the life of Abraham which was the completion of his purpose: the building of a place of worship for all of humanity, not for any chosen race or color, for the worship of the One True God.  Through the establishment of this house was the guarantee that God, the God to Whom he called and for Whom he made endless sacrifices, would be worshipped forever, without the association of any other God with him.  Indeed it was one of the greatest of favors bestowed upon any human.

Yearly, Muslims from around the world gather from all walks of life, the answer to the prayer of Abraham and the call to Pilgrimage.  This rite is called Hajj, and it commemorates many events of God’s beloved servant Abraham and his family.  After circling the Kaaba, a Muslim prays behind the Station of Abraham, the stone on which Abraham stood to build the Kaaba.  After the prayers, a Muslim drinks from the same well, called Zamzam, which flowed in answer to the Prayer of Abraham and Hagar, providing sustenance for Ishmael and Hagar, and was the cause for the inhabitation of the land. The rite of walking between Safaa and Marwah commemorates Hagar’s desperate search for water when she and her baby were alone in Mecca.  The sacrifice of an animal in Mina during Hajj, and by Muslims around the world in their own lands, is after the example of Abraham’s willingness to sacrifice his son for God’s sake.  Lastly, the stoning of the stone pillars at Mina exemplifies Abraham’s rejection of satanic temptations to prevent him from sacrificing Ishmael.

The ‘Beloved servant of God’ about whom God said, "I will make you a leader to the nations,"[1]  returned to Palestine and died there.

Previous: The Story of Abraham (part 6 of 7): The Greatest Sacrifice

I am extremely happy to find this clear and easy to understand web page. I really wanted to know stories of prophets in Islamic view point and I found them. I will keep on educating myself from your web page and I really appreciate your effort to give the true knowledge about Islam to everyone. Jezakellah. Keep up the good work.

As Salamu Alaikum, Thank you for the pious information you have included. MAY ALLAH BLESS ALL MUSLIMS to have deepest faith in ALLAH SWT & Perform hajj & Umra in the holiest city & visit holy Madina & enjoy the happiness of both life & living. may ALLAH render Peace in these holi Places & bless us security with our members of the family & grant jannah to all of us who enjoy Islamic life & living. MAY ALLAH bless offer paradise to our Parents & those live pious life.