Misconceptions about Allah (part 3 of 3): The moon god 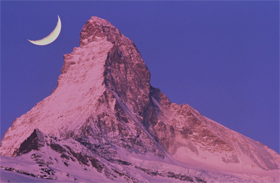 Misinformed people sometimes refer to Allah as a modern interpretation of an ancient moon god.  This gross misrepresentation of Allah is often combined with strange unsubstantiated claims that Prophet Muhammad, may the mercy and blessings of God be upon him, resurrected this god and made him the focal point of the religion of Islam.  This is categorically untrue.  Allah is God, the One, and Only, the Most Merciful.  Allah is the God of Abraham, the God of Moses, and the God of Jesus.

"There is no god but Allah (none has the right to be worshipped but Allah, the One and the only True God, Who has neither a wife nor a son).  And indeed, Allah is the All-Mighty, the All-Wise." (Quran 3:62)

Very little is known about the religion of the Arabs before Prophet Abraham.  There is little doubt that the Arabs wrongly worshipped idols, heavenly bodies, trees, and stones, and that some of their idols even had animal characteristics.  Although a number of minor deities across the Arabian Peninsula may have been associated with the moon[1]  there is no  evidence of the Arabs ever worshipping a moon god above other gods.

On the other hand there is evidence that the sun, constructed as a feminine god was worshipped throughout Arabia.  The Sun (Shams) was honoured by the several Arabian tribes with both sanctuaries and idols.  The name Abdu Shams (slave of the sun) was found in many parts of Arabia.  In the North the name Amr-I-Shams, "man of the Sun" was common and the name Abd-al-Sharq "slave of the Raising one" is evidence for the worship of the rising sun.[2]

One of Prophet Muhammad’s uncles was named Abdu Shams, so to was the man nicknamed Abu Hurairah , a renowned Islamic scholar from the first generation of Muslims.  When Abu Hurairah converted to Islam,  Prophet Muhammad changed his name to Abdur-Rahman (slave of the Most Merciful).

Muslims believe with complete certainty that, since the beginning of creation, Allah has sent prophets and messengers to guide and teach humankind.  Therefore, humankind’s original religion was submission to Allah.  The first Arabs worshipped Allah, however, over time their worship became corrupted by man made ideas and superstitions.  The reason for this is shrouded in the mists of time but they may have  fell into the practice of idolatry in much the same way as the people of Prophet Noah.

The people built statues in their meeting places and their homes, and Satan left them alone until everyone had forgotten the reason the statues existed.  Many years later, the devious Satan appeared amongst the people again, this time suggesting that they worship the idols directly.  An authentic narration of Prophet Muhammad, may the mercy and blessings of God be upon him, sums up the beginning of idolatry in the following way.

"The names (of the idols) formerly belonged to some pious men of the people of Noah, and when they died Satan inspired their people to prepare and place idols at the places where they used to sit, and to call those idols by their names.  The people did so, but the idols were not worshipped till those people (who initiated them) had died and the origin of the idols had become obscure, whereupon people began worshipping them."[3]

When prophet Abraham and his son Ishmael rebuilt the Holy House of Allah (the Kaba) most of the Arabs followed his example and returned to the worship of the One God, however as time passed the Arabs fell into their old habit of worshipping idols and demi-gods.  There is little doubt and much evidence to suggest that in the years between Prophets Abraham and Muhammad the religion of Arabian Peninsula came to be dominated by idol worship.

Each tribe or household had graven images and statues, the Arabs believed in seers, used divining arrows to predict future events and performed animal sacrifices and rituals in the name of their idols.  It is said that the principle idols of Noah’s people were found buried in the area of present day Jeddah, Saudi Arabia and distributed amongst the Arabian tribes[4].  When Prophet Muhammad returned triumphantly to Mecca, the Kaba[5]  contained more than 360 different idols.

The most well known idols that existed in pre Islamic Arabia were known as Manat, al Lat, and al-’Uzza.[6]  There is no evidence linking any of these idols with moon gods or moon. The Arabs worshipped these idols and called on them  for intercession.  Allah repudiated this false idol worship.

"Have you then considered al-Lat, and al-’Uzza (two idols of the pagan Arabs).  And Manat (another idol of the pagan Arabs), the other third?  Is it for you the males and for Him the females?  That indeed is a division most unfair!  They are but names, which you have named, you and your fathers, for which Allah has sent down no authority.  They follow but a guess and that which they themselves desire, whereas there has surely come to them the Guidance from their Lord!" (Quran 53:19-23)

In the midst of overwhelming paganism and polytheism the pre Islamic Arabs  never called upon a moon god as a supreme deity, in fact there is no evidence that they ever called upon a moon god.  For generation after generation they did not loose their belief in One supreme ruler of the universe (even though most of the time they held the wrong concept of belief in Allah).  They were aware of His blessings and His punishment and believed in a Day of Judgement.  Poets of the time referred to Allah regularly.

An-Nabigha As-Zubiani, a well-known poet of the 5th century CE said, "I took an oath and left no margin of doubt for who else can support man, besides Allah, and Zuhair Ibn. Abi.  Solma affirms his faith in the Day of Judgement by saying "The deeds are recorded in the scroll to be presented on the Day of Judgement; Vengeance can be taken in this world too".  Quran also testifies to the fact that the pre Islamic Arabs were aware of Allah –God – the One.

"If you were to ask them "Who has created the heavens and the earth and subjected the sun and the moon?" They will surely reply, "Allah."  How then are they deviating (as polytheists and disbelievers)?  Allah enlarges the provision for which He wills of His slaves, and limits it for whom (He wills).  Verily, Allah is the All Knower of everything.  If you were to ask them, "Who sends down water (rain) from the sky, and gives life therewith to the earth after its death?"  They will surely reply, "Allah."  Say: "All the praises and thanks be to Allah!"  Nay!  Most of them have no sense." (Quran 29: 61-63)

[5] The cube shaped building, in the centre of the Holy Masjid, in the city of Mecca, Saudi Arabia.

Previous: Misconceptions about Allah (part 2 of 3): Allah – the One and Only