Description: The origin of the Quran we hold in our hands today. 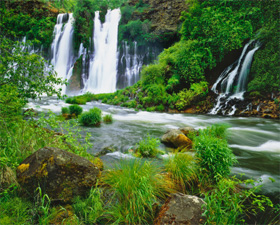 From the traditions of Prophet Muhammad, Umar Ibn Al Khattab narrates an anecdote that clearly shows how the people around the Prophet were anxious to preserve the authenticity of Quran and that the Prophet Muhammad, may the mercy and blessings of God be upon him, was able to mediate any disputes.  He says,

I heard Hisham ibn Hakim reciting in a way different to that of mine.  Therefore, I was about to quarrel with him (during the prayer) but I waited until he finished, then I brought him to God’s Messenger and said, “I have heard him reciting in a way different to the way you taught it to me.”  The Prophet ordered me to release him and asked Hisham to recite.  When he recited it, God’s messenger said, “It was revealed in this way.”  He then asked me to recite the same verses.  When I recited it, he said, “It was revealed in this way.  The Quran has been revealed in seven different ways, so recite it in the way that is easier for you.”[2]

After the death of Prophet Muhammad, hundreds of thousands of non-Arabs converted to Islam.  By the time Uthman Ibn Affan was leader of the Islamic nation the Quran was recited in a variety of different accents and dialects.  Many people especially those new to Islam were becoming confused and some of the Companions of Prophet Muhammad began to fear that the authenticity of Quran would be compromised.

Whilst on a journey, one of Prophet Muhammad’s companions noticed that there were many different recitations of Quran throughout the Muslim Caliphate.  He suggested to Uthman that there be an official version recited in the dialect of the tribe of Quraish and written in the style used in the city of Medina.  All dialects of the Arabic language were renowned for their eloquence but the dialect of Quraish was considered the most expressive and articulate, and thus over generations, it came to be known as the dialect of the Quran.

Uthman Ibn Affan knew the Quran by heart and had intimate knowledge of the context and circumstances relating to each verse, thus he was a fitting person to oversee the standardization of the Quran.  As we know, the Quran had been gathered together during the time of Abu Bakr and was in the safekeeping of Umar Ibn Al Khattab’s daughter, and Prophet Muhammad’s wife, Hafsah.  Uthman sent word to Hafsah, and took possession of the original Mushaf.  The authentic traditions of Prophet Muhammad relate the event as follows.

Hudhaifah came to Uthman at the time when the people of Syria and the people of Iraq were at war with Armenia and Azerbaijan.  He was alarmed by their (the people of Syria and Iraq) differences in the recitation, so he said to ‘Uthman, “O leader of the believers!  Save this nation before they dispute about the Quran as the Jews and the Christians did dispute about their books.”  Therefore, ‘Uthman sent a message to Hafsah saying, “Send us the manuscript so that we may make copies and we will return the manuscript to you.” [3]

Once again, the leaders of the Muslim Caliphate and the men and women Companions of the Prophet made great efforts to preserve the words of God and to remain faithful to the Message.  Uthman ordered some of the most trusted companions, including for a second time Zaid Ibn Thabit, to make careful copies of the Mushaf, saying “in case you disagree, copy it into the dialect of Quraish”.[4]

The original manuscript was sent back to Hafsah and Uthman then ordered all other unofficial copies to be burned or otherwise destroyed.  Thus, an end was put to the dispute and the Muslims were united.  The Uthmani Quran is the Mushaf used by more then 1.2 billion Muslims throughout the world today.  The Quran has remained preserved from generation to generation. Each Mushaf is an exact copy of the original.

“Verily, it is We Who have sent down the remembrance (Quran), and surely, We will guard it (from corruption).” (Quran15:9)

It is not known exactly how many copies were made by Uthman, but many believe it to be five, not including his own copy.  The cities of Mecca, Medina, Damascus, Kufa, and Basra each received a copy.  Throughout early Islamic literature, references are made to these copies and it is believed that original copies exist to this day in Turkey and Uzbekistan.

Ibn Batuta, in the 14th century C.E.  said he had seen copies or sheets from the copies of the Quran prepared under Uthman, in Granada, Marrakesh, Basra, and other cities.  Ibn Kathir related that he had seen a copy of the Uthmani Quran, which was brought to Damascus from Palestine.  He said it was ‘very large, in beautiful clear strong writing with strong ink, in parchment, I think, made of camel skin’.[5]  Ibn Jubair said he saw the Uthmani manuscript in the mosque of Medina in the year 1184 C.E.  Some say it remained in Medina until the Turks removed it in WW1.  The Treaty of Versailles contains the following clause:

Article 246: Within six months from the coming into force of the present Treaty, Germany will restore to His Majesty, King of Hedjaz, the original Koran of Caliph Othman, which was removed from Medina by the Turkish authorities and is stated to have been presented to the ex-Emperor William II.”[6]

[5] Ulum Al-Quran: An Introduction to the Sciences of the Quran, Ahmad Von Denffer, Islamic foundation, UK.

Previous: The Story of the Quran (part 3 of 4): A Revelation Well Preserved and Guarded

Alihamdulillah to be a Muslim. May Allah protect our imaan same way He's protecting Quran.

Beautiful and informative information of the compilation of the Qur'an. BUT, it lacks dates - which is very important. Alhamdu Lillaah