Description: God Almighty is above the heavens, above His creation. 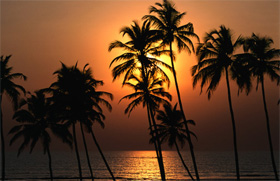 Now and again human beings are prompted to ask themselves some of life’s truly profound questions.  In the quiet darkness of the night, when far off stars twinkle in the vast, majestic sky, or in the cold, hard, light of day when life rushes past like a speeding train, people of all colours, races and creeds wonder about the meaning of their existence.  Why are we here?  What does this all mean?  Is this all there is?

On magnificent days filled with sunshine and iridescent blue skies, people turn their faces towards the sun and contemplate its beauty.  In the deepest winter or the wildest storm, they ponder the strength inherent in the forces of nature.  Somewhere in the deep recesses of the mind, the concept of God arises.  The wonders of creation are a call to the heart and the soul.  The gentle touch of a snowflake, the smell of freshly cut lawn, the soft patter of raindrops and fierce wind of a hurricane are all reminders that this world is full of wonder.

When pain and sadness threaten to engulf us, human beings are again prompted to contemplate the meaning of life.  In the midst of suffering and grief, the concept of God arises.  Even those who would consider themselves far from religion or spiritual belief find themselves looking skywards and pleading for help.  When the heart constricts and fear swamps us, we turn helplessly towards some sort of higher power.  The concept of a God then becomes real and meaningful.

In the midst of pleading and bargaining, the sheer vastness of the universe is laid bare.  The reality of life is filled with awe and wonder.  It is a rollercoaster ride.  There are moments of great joy, and periods of immense sadness.  Life can be long and monotonous or it can be carefree.  As God arises and His majesty is clear, more questions begin to take shape.  One question that inevitably comes to mind is – where is God?

Around the world and down through the ages people have struggled to come to terms with the question of where God is.  The human inclination is to search for God.  The ancient Babylonians and Egyptians built lofty towers in their search for God.  The Persians looked for Him in fire.  Still other, such as the indigenous people of North America and the Celtic people looked for God in the glorious signs of nature around them.  Buddhists find God in themselves, and in the Hindu religion, God is believed to be in every place and in everything.

The quest for God can be confusing.  When posing the question where is God, the resulting answers can also be confusing.  God is everywhere.  God is in your heart.  God is where goodness and beauty exist.  What happens however, when your heart is empty and your surroundings are dismal, dirty, and ugly?  Does God cease to exist?  No! Of course not!  Amidst this confusion, the Islamic concept of God is a beacon of light for those stumbling in the darkness.

What Muslims believe about God is clear-cut and simple.  They do not believe that God is everywhere; they believe that God is above the heavens.  The human need to turn our faces towards the sky in times of trouble and strife is an inherent answer to the question, where is God?  God tells us in the Quran that He is the Most High (Quran 2:255) and that He is above all His Creation.

“He it is Who created the heavens and the earth in six Days and then rose over the Throne (in a manner that suits His Majesty).  He knows what goes into the earth and what comes forth from it, what descends from the heaven and what ascends thereto.  And He is with you (by His Knowledge) wheresoever you may be.  And God is the All-Seer of what you do.” (Quran 57:4)

God is above the heavens, above His creation.  This however does not mean that He is contained by any sort of physical dimensions.  God is close, very close, to those who believe in Him and He answers their every call.  God knows all of our secrets, dreams, and wishes, nothing is hidden from Him.  God is with His creation by His knowledge and power.  God is the Creator and the Sustainer.  Nothing comes into existence except by His will.

When Muslims marvel at the wonders of the universe they are secure in the knowledge that God, the Most High, is above the heavens, and comforted by the fact that He is with them in all their affairs.  When a Muslim is struck by loss or grief, he does not question God’s wisdom, or ask the question, ‘where was God when I was sad, or grieving or suffering?’  Humankind was created to worship God, (Quran 51:56) and God said many times that trials and tribulations would be part of our life experience.

“And He it is Who has created the heavens and the earth in six Days ...that He might try you, which of you is the best in deeds.” (Quran 11:7)

In their darkest night, or their darkest hour humankind instinctively looks towards the sky.  When their hearts beat heavily and fear threatens to overwhelm them, people turn to God.  They raise their hands and beg for mercy, forgiveness, or kindness, and God responds;  For He is the Most Merciful, the Most Forgiving and the Most Kind.  God is distinct and separate from His creation, and there is nothing like Him.  He is All Hearing and All seeing.  (Quran 42:11)  Hence when we ask the question where is God, the answer is undoubtedly, He is above the heavens and above all His creation. We also say that He is not in need of any of His creation and all of creation needs Him..

[1] The text of the Farewell Sermon can be found in Saheeh Bukhari and Saheeh Muslim,  and in the books of At Tirmidhi and Imam Ahmad.

Alhamdulilahi, All Glory and Praise be unto Allah (swt) for without Him nothing is possible. May Allah (swt) reward you all in the best manner. This article is a must read for all Muslims in particular and non-Muslims in general, because it brings out all our inner thoughts and give more meaning to them.