Instincts, Science, and Religion (part 1 of 2): Self-Sacrifice in Animals

Description: Instincts, such as self-sacrifice, are scientifically unexplainable and are sufficient to “overthrow” the theory of natural selection, as Darwin stated himself.  Part 1: The problem of instinct and examples from the animal kingdom. 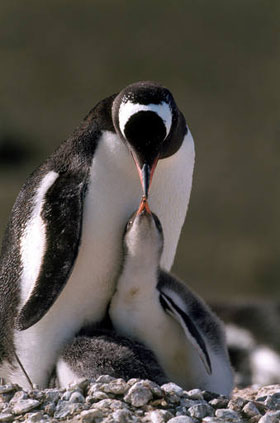 Living beings have to reproduce to continue their species.  However, reproduction by itself often proves insufficient because, if living things fail to provide adequate care for their offspring, the newborn cannot survive.  In other words, if living things did not feel the need to protect and look after their offspring and did not do this successfully, newborn creatures would not be able to look after themselves and would soon die.

When we look at nature, we see the majority of living things display amazing self-sacrifice in order to protect and provide the best of care for their offspring.  Sometimes it is in a selfless form, incomparable to any form of sacrifice shown by human beings.  Furthermore, these living things risk their lives for their young without a moment’s hesitation.  So, how did such self-sacrifice in animals develop?

Evolutionists claim that self-sacrifice displayed by living things, especially that shown towards their offspring, is instinctive behavior.  What then does the word instinct mean?

Evolutionists define instinct as a sense of intuition inherent in living things.  They claim that an inner voice whispers to a spider, a bird, a lion or a tiny insect to practice self-sacrifice to keep the generations going.  In reply to a question regarding the source of this voice, they desperately say “mother nature”.  In the view of evolutionists, every phenomenon in nature is a miracle of nature.

However, it is evident that this claim is futile and meaningless, because nature, itself, is already a created entity consisting of the stones, flowers, trees, rivers and mountains familiar to all of us.  It is obvious that these entities cannot come together to furnish a living being with a new trait, which is a product of intelligence.

As a matter of fact, even Darwin himself was aware of this logical failure from the very beginning.  In his book The Origin of Species, which he wrote in 1859, he expressed his self-doubt about his own theory in the following words:

“I have thought that it would be more convenient to treat the subject separately, especially as so wonderful an instinct as that of the hive-bee making its cells will probably have occurred to many readers, as a difficulty sufficient to overthrow my whole theory.” (Charles Darwin, The Origin of Species, p. 233)

Research conducted by scientists on living things has revealed that they live in astounding harmony, coordination and collaboration with one another.  Wherever one turns in nature, one is likely to see examples of this.  For instance, some little birds utter a shrill alarm call when they see a bird of prey like a hawk or eagle approaching their flock, to warn their companions of the danger.  In doing so, they attract the attention of the attacker to themselves.  This behavior considerably reduces the chance of survival for the bird who sounded the alarm.  But despite this, the bird puts its own life at risk for the hundreds of other birds in the flock.

A majority of animals undertake all kind of self-sacrifice for their young.  For example the incubation period of penguins is during the polar winter.  Female penguins lay only one egg, leave incubation to the males, and return to the sea.  During the four months of incubation, the male penguin has to resist violent polar storms at times reaching speeds of 120 kilometers per hour.  Making great sacrifices for four full months without leaving the egg, the male penguin loses half of its body weight through lack of food.  Although it goes without for months, it does not go hunting, and resists the violent storms without ever leaving the egg.  After the end of the four months, the female penguin shows up with a huge store of food.  She has not wasted time in the meantime, but has worked for her young and stored food for it.  She empties her stomach and takes over the job of caring for the young.

Next: Instincts, Science, and Religion (part 2 of 2): An Islamic View