Description: The first of a three-part article discussing the Islamic concept of Mary: Part 1: Her childhood. 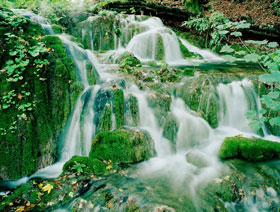 Mary, the Mother of Jesus, holds a very special position in Islam, and God proclaims her to be the best woman amongst all humanity, whom He chose above all other women due to her piety and devotion.

“And (mention) when the angels said, ‘O Mary!  Indeed God has chosen you, and purified you, and has chosen you above all other women of the worlds.  O Mary!  Be devoutly obedient to your Lord and prostrate and bow with those bow (in prayer).’” (Quran 3:42-43)

She was also made by God an example to follow, as He said:

“And (God sets forth the example for those who Believe) of Mary, the daughter of Heli, who guarded her chastity, so We blew into it through Our Angel (i.e., Gabriel), and she believed in the words of her Lord and His Scriptures and was of the devoutly obedient.” (Quran 66:12)

Indeed she was a woman who was fit to bring such a miracle as that of Jesus, who was born without a father.  She was known for her piety and chastity, and if it were any different, then none would have believed her claim to have given birth while remaining in a state of virginity, a belief and fact to which Islam holds true.  Her special nature was one which many miracles proved of from her early childhood.  Let us recount what God revealed in regards to the beautiful story of Mary.

The Childhood of Mary

“Indeed God chose Adam, Noah, the family of Abraham and the family of Heli above all others of the creation.  Offspring, one of the other, and God is the All-Hearer, All-Knower.  (Remember) when the wife (Hannah; also Anne, Ann, Anna) of Heli said: ‘O my Lord!  I have vowed to You what (the child that) is in my womb to be dedicated for Your services (to serve Your Place of worship), so accept this, from me.  Verily, You are the All-Hearer, the All-Knowing.” (Quran 3:33-35)

Mary was born to Heli and his wife Hannah, who was of Davidic descent, thus coming from a family of Prophets, from Abraham, to Noah, to Adam, may the Peace and Blessings of God be on them all.  As mentioned in the verse, she was born to the chosen family of Heli, who was born into the chosen family of Abraham, who was also born into a chosen family.  Hannah was a barren woman who longed for a child, and she made a vow to God that, if He granted her a child, she would consecrate him to His service in the Temple.  God answered her invocation, and she conceived a child.  When she gave birth, she was saddened, for her child was female, and it was usually males who were given in service to Bait-ul-Maqdis.

“So when she gave birth to her, she said, ‘My Lord!  I have delivered a female…and the male is not like the female.”

When she expressed her sorrow, God rebuked her saying:

…for God chose her daughter, Mary, to be the mother of one of the greatest miracles of creation: the virgin birth of Jesus, may the mercy and blessings of God be upon him.  Hannah named her child Mary (Maryam in Arabic) and invoked God to protect her and her child from Satan:

“…And I have named her Mary (Maryam), and commend her and her offspring to your protection from Satan, the outcast.” (Quran 3:36)

God indeed accepted this supplication of hers, and He gave Mary and her soon to come child, Jesus, a special trait - given to none before nor after; neither of them were afflicted by the touch of Satan upon birth.  The Prophet Muhammad, may the mercy and blessings of God be upon him, said:

“None are born except that Satan touches them upon their birth, due to which it comes out screaming from its touch, except Mary and her son (Jesus).” (Ahmed)

Here, we can immediately see a similarity between this narration and the Christian theory of the “Immaculate Conception” of Mary and Jesus, although there is a great difference between the two.  Islam does not propagate the theory of ‘original sin’, and therefore does not condone this interpretation of how they were free from the touch of Satan, but rather that this was a grace given by God to Mary and her son Jesus.  As other prophets, Jesus was protected from committing grave sins.  As for Mary, even if we take the position that she was not a prophetess, she nevertheless received the protection and guidance of God which He grants the pious believers.

“So her Lord accepted her with gracious acceptance, and reared her in purity and beauty, and entrusted her to the care of Zachary.” (Quran 3:37)

Upon the birth of Mary, her mother Hannah took her to Bait-ul-Maqdis and offered her to those in the mosque to grow under their tutelage.  Knowing the nobility and piety of their family, they quarreled as to who would have the honor to rear her.  They agreed to cast lots, and it was none other than the prophet Zachary who was chosen.  It was under his care and tutelage which she was reared.

Miracles in her Presence and Visitation by Angels

As Mary grew older, even the prophet Zachary noticed the special features of Mary, due to the various miracles which occurred in her presence.  Mary, as she was growing up, was given a secluded room within the mosque where she could devote herself to the worship of God.  Whenever Zachary would enter the chamber to see to her needs, he would find abundant, and out of season, fruit in her presence.

“Whenever Zachary entered the chamber, he found her provided with sustenance.  He said, ‘O Mary!  From where did you get this?’  She replied, ‘It is from God.’  Surely God bestows sustenance upon whom He pleases without measure.” (Quran 3:37)

She was visited by angels on more than one occasion.  God tells us that the angels visited her and informed her of her praised status amongst humanity:

“When the angels said, ‘O Mary!  God has chosen you and purified you (due to your worship and devotion), and chosen you (by making you the mother of the prophet Jesus) above the women of the worlds.  O Mary!  Pray to your Lord devoutly, and prostrate yourself, and bow down with those who bow down.’” (Quran 3:42-43)

Due to these visitations of the angels and her being chosen above other women, some have held that Mary was a prophetess.  Even if she was not, which is a matter of debate, Islam still deems her having the highest status amongst all women of creation due to her piety and devotion, and due to her being chosen for the miraculous birth of Jesus.