The Ancient Kingdom of Israel – An Islamic Perspective (part 1 of 6): Prophet Samuel and King Saul

Description: The Children of Israel enter a new era. 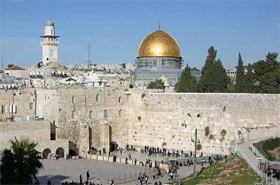 According to Biblical history[1], the ancient Kingdom of Israel was ruled over by a succession of Kings.  After wandering in the desert for an undetermined length of time, the Children of Israel (Israelites) entered the Promised Land and split into two distinct kingdoms.  King David managed to unite the two Kingdoms, while his son Solomon led the children of Israel into a period of prosperity and peace known as the Golden Age.  For many readers, it may come as a surprise to learn that Islamic history also contains stories of kings, Saul, David, and Solomon.  Muslims believe that David and Solomon are Prophets and as such, they are required to believe in, and love and respect them as part of the creed of Islam.  What follows is an account of the Kingdom of Israel from an Islamic perspective[2].

When Prophet Moses led his people out of bondage in Egypt, he faced severe tests and challenges.  After generations under the brutal yoke of the Egyptians, the Children of Israel needed a period of recovery.  Their souls had been hardened by the idolatrous practices prevalent in Egypt and this caused a blackness to settle upon their hearts.  Although God directed Moses to lead his people to the Promised Land they were prevented from entering until Moses’ entire generation had passed away and were replaced by people whose hearts were filled with remembrance of God.  Joshua led the Children of Israel into the Promised Land and for some time their condition remained pure and their hearts and minds remained focused on pleasing the One God.

Time passed and their moral condition deteriorated, the Israelites began to commit many sins, including the abdominal crime of killing their Prophets.  Consequently, God decreed that a tyrannical king who cared little for his people rule them.  He shed their blood, treated them with contempt and his aggression involved them in wars with neighbouring countries.  During the endless wars, the Israelites carried with them a chest containing relics and treasures from their Prophets Moses and Aaron.

The chest was known as the Ark of the Covenant and the Israelites set such store by it, they even carried into battle.  It bought them great peace and filled them with courage.  Their enemies however, believed the chest contained special powers and it filled them with fear.  In time, the Philistines overcame that fear, defeated the Israelites, and captured the chest.  When the tyrannical king learned that the chest had been captured, he collapsed and died.  The children of Israel remained lost, like sheep without a shepherd until God sent Prophet Samuel to guide them back to the true path- to worship One God, without partners, sons, daughters, or rivals.

Appoint for us a King

Disheartened by the loss of their power the Israelites beseeched Prophet Samuel to appoint for them a king.  They asked for a strong man  to lead them back to power and prosperity but Samuel was wary of their promises and pleas.  He feared that their blackened hearts would not allow them to fight for the sake of God.  Samuel was a wise man and he prayed that God direct him to a man suitable to be the King of the Israelites.  God chose Saul (Talut) to be the King and informed Prophet Samuel that he would recognise this pious young man.

Saul was a tall, well-built young man who worked with his father on a farm.  One day when some donkeys wandered away from the farm Saul and a servant went in search of them.  The search led them into Prophet Samuel’s  town.  Saul was a wise man who took his servants advice and approached Prophet Samuel about the loss of the donkeys.  Samuel recognised him immediately as the future king and assured Saul that the donkeys were already being returned to his father.  Prophet Samuel informed Saul that God had chosen him to be the King of the children of Israel.

Saul was shocked and amazed, he immediately responded by saying that he was not worthy of such an honour because he was from the tribe of Benjamin, a lowly tribe that most Israelites considered unworthy for such greatness.  Prophet Samuel explained that this was of no consequence since God had already decreed that Saul be the King.  Samuel presented Saul to the Israelites saying , “Indeed God has appointed Saul (Talut) as a king over you.” (Quran 2:247)

The children of Israel’s immediate reaction was to complain.  Even though they had begged God for mercy and deliverance from oppression, they responded contemptuously towards both the pious young man, whose heart was filled with love for the One God, and Prophet Samuel.  They said, “How can he be a king over us when we are better fitted than him for the kingdom, and he has not been given enough wealth.” (Quran 2:247)

The Israelites’ hearts had once again become hardened and diseased.  They were concerned with wealth and status rather then piety, and found fault with God’s chosen leader.  Although Saul had neither wealth nor status, God had blessed him with knowledge and stature.  Prophet Samuel tried to reason with them.  He said, “Verily, God has chosen him above you and has increased him abundantly in knowledge and stature.  And God grants His Kingdom to whom He wills.” (Quran 2:247) However the Israelites continued to complain and object asking for a sign from God that Saul was indeed fit to be their king.

God, in His infinite mercy and wisdom, decided to provide  the Israelites  with the sign  (or miracle) they demanded.  God instructed the angels to return the Ark of the Covenant that had been captured by the Philistines.  God not only returned their beloved wooden chest, filled with the relics of the past but He added tranquillity to its contents.

“And their Prophet (Samuel) said to them: Verily!  The sign of His Kingdom is that there shall come to you a wooden box, wherein is Sakinah (peace and reassurance) from your Lord and a remnant of that which Moses and Aaron left behind, carried by the angels.  Verily, in this is a sign for you if you are indeed believers.” (Quran.2:248)

Saul was officially appointed King.  He established and prepared an army in order to take back the lands stolen from the children of Israel.  However, Saul insisted that his army only comprise of courageous and pious men.  The men under Saul’s command would be those whose hearts were filled with love for the One True God.

[2] Based on the work of Ibn Kathir, Stories of the Prophets.

Next: The Ancient Kingdom of Israel (part 2 of 6): Saul Recruits an Army