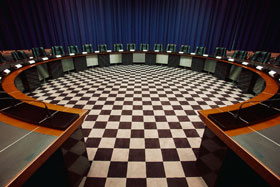 The Basics of the Political System in Islam (part 2 of 2): Islam and Democracy

Description: In understanding the concept of government in Islam, one need to first understand the nature of the religion.  This article explains how the fundamental beliefs of Islam play a pivotal role in the system of governance.  Part 2: Is Islam and democracy compatible?

In order to discuss productively the topic of democracy, one must first understand the origins and meanings of the concept itself.  But, for the sake of brevity, it can be said that, according to the “modern” and most rudimental understanding of the term, Islamic thought does conform to some of its aspects.  One such aspect is the fact that Muslims have a right to appoint their rulers, hold them accountable and, when need be, to remove them from office.  Islam does not, however, empower the system of government with the right to absolve or change the legislation of the religion in society, nor does it leave them the right of creation of novel legislations.  Rather, legislation is the right of God alone, and religion must be pivotal in deciding the validity of any new law. Bypassing this right of God amounts to the unforgivable sin of polytheism, for it from the basis of the belief in the Oneness of God that He and only He has the right of legislation.  What this means is that the people or their elected officials do not have a right to make permissible what God has forbidden, or to declare forbidden what God has made permissible.  Both in granting them such a right and then following their legislation is their elevation, making them lords like God, and this is what is meant by polytheism.  No-one has the right to change the Law of God, and His Law is superior to and supersedes all man-made laws.

Setting the boundaries of interaction between Islam and democracy, Muslims today are debating the relationship of Islam to democratic institutions in their societies.  While most Muslims wish for greater political participation, the rule of law, government accountability, freedoms, and human rights, there are many different ways to achieve these goals.  To some, Islam has its own mechanisms which preclude democratic institutions.  Still others contend that Islam is fully capable of accommodating and supporting democratic institutions.  Engaging in a process of reform, they argue the compatibility between Islam and certain types of ‘democracy’ by using traditional Islamic concepts like consultation (shura) between the ruler and the ruled, community consensus (ijma), public interest (maslaha), and scriptural based opinion (ijtihad).  These mechanisms can be used to support forms of government with systems of checks and balances among the executive, legislative, and judiciary branches.  However, rulers of authoritarian states tend to ignore, discourage, or suppress democratic institutions.

In general, one can see that Islam is a religion which not only governs the private religious life of an individual, but also mandates and regulates all aspects of public life.  As the notion of worship in Islam is not restricted to mere rituals but inclusive of all deeds of obedience and goodness, so too does the concept of religion extend to all avenues of life on Earth.  To a Muslim, the concepts of religion and state are inseparable.  In keeping this principle respectfully in mind, whatever the form of government a Muslim society chooses to implement, all its constituents must be in direct concordance to the precepts of religion.  By no means can the system of governance exclude, absolve, or interpolate any mandate of the religion, and this is yet only another example of the pure monotheistic nature of Islam, and that all rights due to God are rendered to Him alone, and none else.