Description: The beginning of Hajj and the importance of the Kaaba. 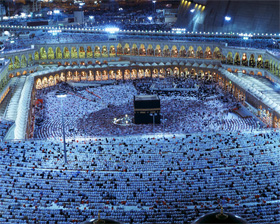 Hajj is a commemoration of love and celebration of faith. We commemorate Abraham’s Supreme Sacrifice in love of his Beloved in Mina. We celebrate his wife Hagar’s display of unprecedented love for the infant Ishmael and her unflinching trust in the Providence in the lonely desert around Safa and Marwa. We venerate God’s Greatest Gift, the Quran by spending a day in Arafat where the final revelation was sent. We celebrate faith by coming face-to-face to the Qiblah of our prayers.

Hajj is also an act of renunciation. Muslims from every corner of the globe don their coffins--two cotton sheets--to represent their deaths to this life and head to their Primordial Home. They pay their debts, ask forgiveness of everyone, bid farewell to one and all and prepare to die to this world to live in Him. We are now ready for Hajj to the Kaaba very special place.

The Kaaba is a special place. It was the first house of worship built by the first man. God commanded Adam to make a journey. He walked umpteen months until he arrived guided by God to Mecca. Here, he was instructed to build Him a House. This was mankind’s first House of Worship. This is where we first learned to mourn our separation from our Beloved. This is where Adam shed countless tears to lament loss of paradisiacal glory. This is where we sought to seek His nearness. This is where we sought to experience His intimacy. This House is the Archetype which basks under another House situated far beyond the realm of the Visible Universe and the prison of space and serial time. This is the first act of reconciliation with our Paradisiacal Destiny in the Home of our Beloved in spite of our terrestrial sojourn.

The Kaaba is a special place. It was once lost to us but our Beloved led His Friend Abraham (may God shower him with praise) to this Sanctuary and gave him the task of restoring this House. Our father recruited his son Ishmael for the Holy Task. For months at end, father and son toiled under the searing desert sun sustained only by their burning love for the Eternal God. This choice was no random choice. Abraham was the man for the job. Every year, when men and women were to come to this blessed House, they were to come on 10th of the month of Dhul-Hijjah. This auspicious day God asked Abraham to make the Supreme Sacrifice and Abraham delivered. Allah asked His Friend to sacrifice his son Ishmael and he obliged.

Kaaba is a special place. Its foundations have been fortified by love and faith of Abraham’s family. We go there to commemorate love. We go there to celebrate faith. Abraham lived the true meaning of Surrender. He loved God, his Friend, above all. God gave him a dream where he saw himself sacrificing his son. Persistence of the dream convinced him that it wasn’t just a dream but an allusion from the Infinite. He intimated the dream to his son who readily concurred. Once it was known to be God’s Will, the son didn’t offer any excuses. It was a foregone conclusion that His Will be done. Father and son set off to the designated place. When they reached their destination, son suggested that the father cover his eyes so his love does not overwhelm him into disobeying His master. At the very moment that Abraham let loose his knife, the son was substituted with a lamb. This time and this day was made sacred. Every year, millions come this very day. Millions retrace the steps of these two in the valley of Mina, they stop where they stopped, walk where they walked and finally arrive where the Supreme Sacrifice was offered. Here, everyone offers a sacrifice in His Love and then gives it to the impoverished people of the land all the while marveling at Abraham’s burning love and faith in God that he was willing to sacrifice his most precious love. Those who can’t be here, celebrate this wonderful sacrifice wherever they may be in any part of the world. For indeed, the love of God must be celebrated.