The Story of Joseph (part 6 of 7): The Importance of Dreams

Description: Newly released from prison Joseph takes up a high position in the Egyptian government, and then comes face to face with  surprise. 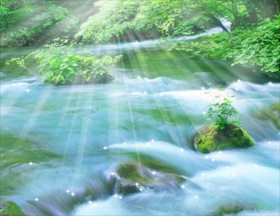 Prophet Mohammad said: “Every Prophet was sent to his nation exclusively, but I was sent to all mankind.”[1]  God sent Joseph, son of Jacob, to the people of Egypt and supported him with abilities that were observable and made sense to the people the Joseph had been sent to guide.  At the time of Joseph, dreams and dream interpretation were very important, and this is clear throughout the story of Joseph.  Prophet Jacob (Joseph’s father), the companions of the prison and the King of Egypt all have dreams.

When the King heard Joseph’s interpretation of his dream, he was astonished, and set Joseph free.  However, Joseph refused to leave the prison with out clearing his name of any wrongdoing.  He wanted his master Al Aziz to be completely sure that he (Joseph) had not betrayed his trust.  Joseph respectfully demanded that the King investigate the affair of the women who cut their hands.  The King became curious and called for the wife of Al Aziz and her associates.

Once his innocence was established, Joseph appeared before the King.  After hearing, Joseph’s words the King became even more impressed and entrusted him to a position of high rank.  Joseph said, “Set me over the storehouses of the land; I will indeed guard them with full knowledge.” (Quran 12:55) In the religion of Islam, it is not permissible for one to ask for a position of authority or two talk about oneself in a boastful manner.  However when Joseph asked the King to put him in charge of the storehouses he did both of those things.

The scholars of Islam explain that when you are the only person fit for that position then it is permissible to ask for it, and if you are new to a community, it is permissible to introduce yourself.  Joseph knew the trials about to face Egypt and he knew he was capable of averting the danger inherent in a time of famine.  For Joseph, not asking for this position would have been irresponsible.  The young boy betrayed and thrown into the well was now established as the finance Minister of Egypt.  His patience and perseverance, and above all his total submission to the will of God had already resulted in great reward.  Joseph knew however that the greatest reward for patience and righteousness would be in the hereafter.

The time passed.  During the seven good years, Joseph prepared for the time of famine to come.  The drought and famine correctly prophesized by Joseph did not only affect Egypt, but also the surrounding lands including the place where Jacob and his sons were living.  Joseph managed the affairs of Egypt so well there was enough grain to feed the people of Egypt and those in the surrounding areas.  As life became difficult and food scarce, people began to flock to Egypt to buy the grain Joseph was selling at a fair price.

Among those seeking provisions were Joseph’s ten older brothers.  When the brothers were ushered into Joseph’s presence, they did not recognise him. Joseph looked at his brothers and his heart filled with longing for his father and his young brother Benjamin.  He greeted them respectfully, asked questions about their family and homeland, and explained that the rations of grain would be distributed per head; therefore, if they had bought their younger brother they would have received more rations.  Joseph was hoping to encourage them to bring Benjamin, in fact Joseph went far as to say that without their young brother they would receive no provision at all.

When they returned to their father, Prophet Jacob, they explained to him that no more grain would be provided to them unless they travelled with their young brother.  Benjamin had become very close to his father, especially after Joseph’s disappearance.  Remembering his previous loss, Jacob did not want to part with his young son.  Once again, the brothers promised to safeguard their youngest brother, and once again Jacob felt his heart constrict with fear.  The brothers then found that the money they paid for the grain had been secretly returned to them.

Jacob had complete trust in God and gave them permission to take Benjamin only after they had sworn an oath in God’s name to protect him.  Although Prophet Jacob was particularly close to his sons Joseph and Benjamin, he loved all his sons dearly.  They were strong, handsome, capable men, and Jacob was afraid that some harm might befall them on yet another trip to Egypt.  To minimise the risks, he made his sons promise to enter the city by different gates.  Jacob said to them,

“O my sons!  Do not enter by one gate, but enter by different gates, and I cannot avail you against God at all.  Verily!  The decision rests only with God.  In Him, I put my trust and let all those that trust, put their trust in Him.” (Quran 12:67)

The brothers returned to Egypt, entered by different gates and went to Joseph for the promised provisions.  During this meeting, Joseph took Benjamin aside and revealed that he was his long lost brother.  The two embraced and their hearts were filled with joy.  Joseph, however, asked Benjamin to keep their meeting a secret for the time being.  After providing the brothers with their rations of grain, Joseph arranged for golden bowl to be covertly placed in Benjamin’s bag, then according to Joseph’s arrangements someone cried out, “O you in the caravan, surely you are thieves.” (Quran 12:70)

The brothers were astonished because they were not thieves.  They inquired about the stolen item, and were astounded to hear it was a golden bowl belonging to the King.  Whoever returned it, they were told, would be rewarded with camel’s load of grain.  The brothers of Joseph claimed to have no knowledge of this theft.  They asserted that they were not thieves and did not come to Egypt to create mischief.  One of Joseph’s men asked, “What is your punishment for one who steals?”  The brothers replied that under the law of Prophet Jacob, the one who steals is taken as a slave.  Joseph did not want his brother punished under the laws of Egypt but wanted the opportunity to keep his brother with him while the others retuned to their father Jacob.  The bags were searched, and the golden bowl was found amongst Benjamin’s possessions.