Description: A detailed account of how the Prophet, may the mercy and blessings of God be upon him, received his first revelations from God.

It was during this time when the Prophet began to see pleasant dreams which in turn proved true.  He also felt an increasing need for solitude, and this lead him to seek seclusion and meditation in the rocky hills which surrounded Mecca.  There he would retreat for days, taking provisions along with him, and would return to his family for more provisions.  In the blaze of day and during the clear desert nights, when the stars seem sharp enough to penetrate the eye, his very substance was becoming saturated with the ‘signs’ in the heavens, so that he might serve as an entirely adequate instrument for a revelation already inherent in these ‘signs.’  It was then that he was undergoing a preparation for the enormous task which would be placed upon his shoulders, the task of prophethood and conveying the true religion of God to his people and the rest of humanity.

It came on a night late in the sacred month of Ramadan, the night known to Muslims as Laylat-ul-Qadr, the ‘Night of Decree.’ 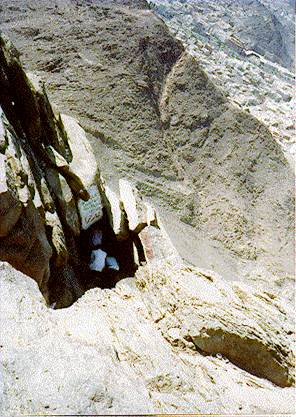 Cave of Hira (aerial view).  Prophet Muhammad used to meditate in this cave frequently.  The first revelations of the Quran came to him here.

Prophet Muhammad was in solitude in the cave on Mount Hira.  He was startled by the Angel of Revelation, Gabriel, the same who had come to Mary, the mother of Jesus, who seized him in a close embrace.  A single word of command burst upon him: ‘Iqra’  - ‘Read![1]’  He said: ‘I am not able to read!’  but the command was issued twice more, each with the same response from the Prophet.  Finally, he was grasped with overwhelming force by the angel.  Gabriel released him, and the first ‘recitation’ of the Quran was revealed to him:

“Read in the name of your Lord who created -created man from a clot.  Read: for your Lord is Most Bountiful, who teaches by the pen, teaches man that which he knew not.” (Quran 96:1-5)

Thus began the magnificent story of God’s final revelation to humanity until the end of times.  The encounter of an Arab, fourteen centuries ago, with a being from the realm of the Unseen was an event of such momentous significance that it would move whole peoples across the earth and affect the lives of hundreds of millions of men and women, building great cities and great civilizations, provoking the clash of mighty armies and raising from the dust beauty and splendor unknown previously.  It would also bring teeming multitudes to the Gates of Paradise and, beyond, to the beatific vision.  The word  Iqra’ , echoing around the valleys of the Hejaz, broke the mould in which the known world was casted; and this man, alone among the rocks, took upon his shoulders a burden which would have crushed the mountains had it descended upon them.

Prophet Muhammad was forty years old and he had reached an age of maturity.  The impact of this tremendous encounter may be said to have melted his substance.  The person he had been was like a skin scorched by light and burnt away, and the man who descended from the mountain and sought refuge in the arms of his wife Khadeeja was not the same man who had ascended it.

For the moment, however, he was as if a man pursued.  As he descended, he heard a great voice crying: ‘Muhammad, thou art the Messenger of God and I am Gabriel.’  He looked upwards, and the angel filled the horizon.  Wherever he turned, the figure was there, inescapably present.  He hastened home and cried to Khadija: ‘Cover me!  Cover me!’  She laid him down, placing a cloak over him, and as soon as he had recovered himself a little he told her what had happened.  The Prophet was in fear for himself.  She held him close and solaced him:

“Never!  By God, God will never disgrace you.  You keep good relations with your relatives, help the poor, serve your guests generously, and assist those hit with calamities.” (Saheeh Al-Bukhari)

She saw in her husband a man God would not humiliate because of his virtues of honesty, justice, and helping the poor.  The first person on the face of earth to believe in him was his own wife, Khadija.  At once, she went to see her uncle Waraqa, a biblical scholar.  After listening to the account of her husband’s experience, Waraqa recognized him from the prophecies of the Bible to be the awaited prophet,  and he confirmed that what had appeared to him in the cave was the indeed the angel Gabriel, the Angel of Revelation:

“This is the Keeper of Secrets (Gabriel) who came to Moses.” (Saheeh Al-Bukhari)

The Prophet continued to receive revelations for the remainder of his life, memorized and written down by his companions on pieces of sheepskin and whatever else was at hand.

The Quran or “Recitation”

The words brought to him from Gabriel are held sacred by the Muslims and are never confused with those which he uttered himself.  The former are the Sacred Book, the Quran; the latter the Hadith or Sunna of the Prophet.  Because the angel Gabriel would recite the Quran orally to the Prophet, the Sacred Book is known as Al-Quran, “The Recitation,” the recitation of the man who knew not how to read.

[1] The word ‘read’ in Arabic has connotations of both reading and reciting.

Wow' the true prophet of God. Peace be upon Him.