Description: Joseph faces a great trial of seduction and seeks refuge with God. 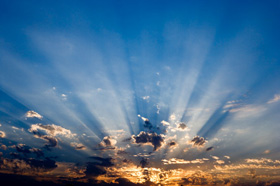 Although betrayed and sold into slavery, Joseph, the son of Prophet Jacob, settled into one of the great houses of Egypt.  His master, Al Azeez, Chief Minister of Egypt vowed to treat Joseph kindly, and Joseph, who was grateful for the relative safety, replied that he would be loyal to his new master.  He thanked God for rectifying his situation and placing him in a place devoid of maltreatment and abuse.  Joseph went from the position of beloved son to the dark depths of the well, from iron shackles to a position of ease.  Joseph’s life twisted and turned, but the house of Al Aziz was where he grew into manhood.

The scholars of Islam have estimated that Joseph was around 14 years old when betrayed by his brothers.  Imam Ibn Katheer, one of the most respected Quran scholars, explained in his work, “Stories of the Prophets”, that Joseph was most probably the personal attendant of Al Aziz’s wife.  Ibn Katheer described Joseph as obedient, polite and exceedingly handsome.  Prophet Muhammad also described Joseph, and called him “The embodiment of half of all beauty”[1].  As Joseph grew, God gave him wisdom and good judgement, and Chief Minister Al Aziz recognised these qualities in his loyal servant and therefore put him in charge of all household affairs.  All who knew him, including the wife of Al Aziz, acknowledged Joseph’s beauty, honesty, and nobility.  She watched Joseph grow into a handsome man and became more attracted to him as each day passed.

The beautiful wife of Al Aziz closed the doors and tried to seduce the slave Joseph, but he resisted her advances and sought refuge with God.  He sought help in God.  Joseph told her he would not betray her husband.  Joseph said, “He has been good to me and treated me with respect.”  Joseph knew that those who commit evil acts will never be successful.  The wife of al Aziz had an evil desire and tried to act upon it; Joseph however resisted the temptation and tried to escape.  Prophet Muhammad tells us that if you make the intention to commit an evil act and actually carry out that act, God will have it written against you as one evil act.  However if you think about committing an evil act and then do not do it, God will have it written as a good act.[2]

Joseph drove any thoughts of sleeping with the wife of his master from his mind, sought refuge with God and attempted to remove himself from the complicated situation.  Perhaps Joseph had been resisting her advances for many years.  A rich beautiful woman from the highest echelons of Egyptian society would not stoop immediately to such behaviour.  Her beauty, status and wealth meant that most men or boys would succumb to her desires easily.  Joseph however was no ordinary man, and when he immediately turned to God for help, God rescued him.

“Indeed she did desire him and he would have inclined to her desire had he not seen the evidence of his Lord.  Thus, it was that We might turn away from him evil and illegal sexual intercourse.  Surely, he was one of Our chosen, guided slaves.” (Quran 12:24)

Joseph is one of the leaders of those who will be shaded by God on the Day of Judgement.  Prophet Muhammad explained that the heat of the Day of Judgment would be fierce, and people will be mingling with fear as they wait to be judged by God.  There will be however, certain categories of people shaded from this brutal heat.  One of them is a man who resisted the temptations of a beautiful, desirable woman by seeking refuge with God.[3]

Joseph’s refusal only increased her passion.  He tried to flee and they raced with each other to the door.  The wife of Al Aziz reached for Joseph’s shirt and tore it from his back.  At that moment, the door opened and her husband walked in.  Immediately, with out even one second’s hesitation, the wife of al Aziz attempted to turn the situation around.  She cried out to her husband, “What is the punishment for one who had an evil design against your wife?”  This was a clear lie, yet she pronounced it easily and suggested that Joseph be put in prison.  Joseph tried to defend himself and said, “No, it was she that sought to seduce me”.  (Quran 12:25 – 26)  One of their relatives suddenly appeared and offered a way to solve this dilemma.  He said,

If his shirt was torn from the back, which it was, it meant that he was trying to escape and she was running after him, tearing the shirt from his back.  The proof was unmistakeable.  The Chief Minister, although clearly upset, was more concerned with covering up this affair.  He did not want his good name and position to be sullied by a scandal.  He asked Joseph to be silent about the situation and told his wife to ask forgiveness from God.  This should have been an end to the matter, but as is common in more wealthy societies, people have a lot of time on their hands.  Many hours are wasted having meals and gossiping about the affairs of their friends, neighbours and relatives.

The women of the city began to talk about the wife of Al Aziz and her infatuation with her slave Joseph.  The news was spreading and the women asked themselves how she could desire a slave and put her reputation in jeopardy.  The wife of Al Aziz thought she would teach these women a lesson and show them just how beautiful and desirable Joseph was.  She invited them to have lunch with her, laid a beautiful table before them and handed them knives to cut the food.  The room was probably full of tension and silent looks as the women hoped for a glimpse of this slave, while at the same time considering themselves better then the wife of Al Aziz.  The women started eating, and at that moment, Joseph walked into the room.  They looked up, saw his beauty and forgot that they had knives in their hands.  The women were so entranced by his shape and form that they cut clear through their own flesh.  They described Joseph as a noble angel.  The wife of Al Aziz, confident and haughty said to her guests,

“This is he (the young man) about whom you did blame me (for his love) and I did seek to seduce him, but he refused.  And now if he refuses to obey my order, he shall certainly be cast into prison, and will be one of those who are disgraced.”  Quran 12:32)

What was to become of Joseph?  Once again, with total humility, he turned to God saying that prison was preferable to succumbing the women’s desires.  Therefore, his Lord answered his invocation.