Preservation of the Quran (part 2 of 2): The Written Quran

Description: The writing of the Quran during the time of Muhammad and its preservation until this very day.

The entire Quran was however also recorded in writing at the time of revelation from the Prophet’s dictation, may the mercy and blessings of God be upon him, by some of his literate companions, the most prominent of them being Zaid ibn Thabit.[1]  Others among his noble scribes were Ubayy ibn Ka’b, Ibn Mas’ud, Mu’awiyah ibn Abi-Sufyan, Khalid ibn Al-Waleed and Az-Zubayr ibn Al-Awwam.[2]  The verses were recorded on leather, parchment, scapulae (shoulder bones of animals) and the stalks of date palms.[3]

The codification of the Quran (i.e. into a ‘book form’) was done soon after the Battle of Yamamah (11AH/633CE), after the Prophet’s death, during the Caliphate of Abu Bakr.  Many companions became martyrs at that battle, and it was feared that unless a written copy of the entire revelation was produced, large parts of the Quran might be lost with the death of those who had memorized it.  Therefore, at the suggestion of Umar to collect the Quran in the form of writing, Zaid ibn Thabit was requested by Abu Bakr to head a committee which would gather together the scattered recordings of the Quran and prepare a mushaf - loose sheets which bore the entire revelation on them.[4]  To safeguard the compilation from errors, the committee accepted only material which had been written down in the presence of the Prophet himself, and which could be verified by at least two reliable witnesses who had actually heard the Prophet recite the passage in question[5].  Once completed and unanimously approved by the Prophet’s Companions, these sheets were kept with the Caliph Abu Bakr (d. 13AH/634CE), then passed on to the Caliph Umar (13-23AH/634-644CE), and then Umar’s daughter and the Prophet’s widow, Hafsah[6].

The third Caliph Uthman (23AH-35AH/644-656CE) requested Hafsah to send him the manuscript of the Quran which was in her safekeeping, and ordered the production of several bounded copies of it (masaahif, sing. mushaf).  This task was entrusted to the Companions Zaid ibn Thabit, Abdullah ibn Az-Zubair, Sa’eed ibn Al-’As, and Abdur-Rahman ibn Al-Harith ibn Hisham.[7]  Upon completion (in 25AH/646CE), Uthman returned the original manuscript to Hafsah and sent the copies to the major Islamic provinces.

A number of non-Muslim scholars who have studied the issue of the compilation and preservation of the Quran also have stated its authenticity.  John Burton, at the end of his substantial work on the Quran’s compilation, states that the Quran as we have it today is:

“…the text which has come down to us in the form in which it was organized and approved by the Prophet…. What we have today in our hands is the mushaf of Muhammad.[8]

Kenneth Cragg describes the transmission of the Quran from the time of revelation to today as occurring in “an unbroken living sequence of devotion.”[9]  Schwally concurs that:

“As far as the various pieces of revelation are concerned, we may be confident that their text has been generally transmitted exactly as it was found in the Prophet’s legacy.”[10]

The historical credibility of the Quran is further established by the fact that one of the copies sent out by the Caliph Uthman is still in existence today.  It lies in the Museum of the City of Tashkent in Uzbekistan, Central Asia.[11]  According to Memory of the World Program, UNESCO, an arm of the United Nations, ‘it is the definitive version, known as the Mushaf of Uthman.’[12] 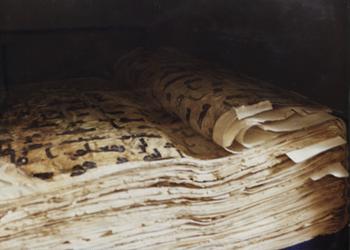 This manuscript, held by the Muslim Board of Uzbekistan, is the earliest existent written version of the Quran.  It is the definitive version, known as the Mushaf of Othman.  Image courtesy of Memory of the World Register, UNESCO.

A facsimile of the mushaf in Tashkent is available at the Columbia University Library in the US.[13]  This copy is proof that the text of the Quran we have in circulation today is identical with that of the time of the Prophet and his companions.  A copy of the mushaf sent to Syria (duplicated before a fire in 1310AH/1892CE destroyed the Jaami’ Masjid where it was housed) also exists in the Topkapi Museum in Istanbul[14], and an early manuscript on gazelle parchment exists in Dar al-Kutub as-Sultaniyyah in Egypt.  More ancient manuscripts from all periods of Islamic history found in the Library of Congress in Washington, the Chester Beatty Museum in Dublin (Ireland) and the London Museum have been compared with those in Tashkent, Turkey and Egypt, with results confirming that there have not been any changes in the text from its original time of writing.[15]

The Institute for Koranforschung, for example, in the University of Munich (Germany), collected over 42,000 complete or incomplete ancient copies of the Quran.  After around fifty years of research, they reported that there was no variance between the various copies, except the occasional mistakes of the copyist which could easily be ascertained.  This Institute was unfortunately destroyed by bombs during WWII.[16]

Thus, due to the efforts of the early companions, with God’s assistance, the Quran as we have it today is recited in the same manner as it was revealed.  This makes it the only religious scripture that is still completely retained and understood in its original language.  Indeed, as Sir William Muir states, “There is probably no other book in the world which has remained twelve centuries (now fourteen) with so pure a text.”[17]

The evidence above confirms God’s promise in the Quran:

“Verily, We have revealed the Reminder, and verily We shall preserve it.” (Quran 15:9)

The Quran has been preserved in both oral and written form in a way no other book has, and with each form providing a check and balance for the authenticity of the other.

Previous: Preservation of the Quran (part 1 of 2): Memorization

Salam , i love quran , so many i learnt about al quran, so many more i do not know about it . Allah is the Greatest. thank you for Allah for stumble me to this site.