Description: The importance of trustworthiness and the severe warning against treachery in the Islam. 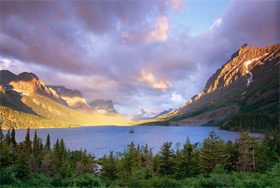 In the article entitled Honesty, we discussed how important the concept of honesty is to Islam and how it incorporates truthfulness and reliability.  Another dimension of honesty is trustworthiness, or in Arabic, amanah.  The meaning of amanah is trustworthiness, or, it is something or someone left to someone to protect or keep.  The opposite of amanah is betrayal or even treason.  That is, to fail to keep the trust or amanah in the way the person who left it expected or wanted.

Trustworthiness further enhances the integrity and sound moral conduct that is inherent in the notion of honesty.  Being trustworthy implies being honest, fair in dealings and punctual (in terms of both regularity and timeliness) as well as honouring trusts and keeping promises and commitments.  An important part of the noble Islamic character is being trustworthy.  Prophet Muhammad was known, even before his Prophethood to be Al Amin (the trustworthy one).

While the qualities of honesty and trustworthiness are inextricably entwined, there are slight differences.  Honesty implies a lack of deceit while trustworthiness entails honouring and fulfilling commitments, promises, trusts and covenants.  It covers moral, social, legal and religious obligations.  Being truthful in promises and covenants is one of the characteristics by which the believers are known.  Both promises and covenants involve saying something about an issue to confirm that you will uphold the trust.  This is especially so with regard to one's duties towards God.  God praises the believers by promising them Paradise,

“Those who are faithfully true to their amanah (all the duties which God has ordained, honesty, moral responsibility and trusts, etc.) and to their covenants...these indeed are the inheritors.  Who shall inherit Paradise.  And dwell therein forever” (Quran 23:8, 23:10-11)

Trust, and being worthy of another’s trust, is inherent in being one who is submitted to the will of God.  When God appointed Adam (the father of mankind) as successor on earth,  it was a trust incumbent upon all of mankind.  When God created us as individuals for worshipping Him, it became a trust incumbent upon us to nourish[1]  ourselves and our families in a way that enables worship.

In Islam, every believer is a brother or sister to the other; we are one body, one nation.  The right hand must be able to trust the left hand.  The commands and rules from God are designed for our benefit and Islam holds people’s rights in high esteem.  The systematic arrangement of guidelines and regulations is intended to uphold the rights Islam gives to the believers and to minimise vice and corruption.  Islam strongly condemns the violation of God-given rights.  When God commands us to keep the trust, to be trustworthy, it is not a matter to be taken lightly.

Prophet Muhammad explained the seriousness of upholding the rights due to others when he said, “God says, ‘There are three people whom I shall be their opponent on the Day of Judgment: A man who was given something in My Name and then betrays; A man who sells-off a free man (as a slave) and consumes the price; and A man who hires a labourer, makes use of his service then does not give him his wages.’” (Saheeh Al-Bukhari).  God says in the Quran,

“Verily, God does command you to render back your Trusts to whom they are due.” (Quran 4:58)

In the past God dealt severely with people who were dishonest and did not honour their trusts.  The people of Midian had developed unfair and corrupt business practices and Prophet Shuaib was instructed to warn them of God’s displeasure.

“He said, “O my people!  Worship God, you have no other god but Him, and give not short measure or weight, I see you in prosperity; and verily I fear for you the torment of a Day encompassing.  And O my people!  Give full measure and weight in justice and reduce not the things that are due to the people, and do not commit mischief in the land, causing corruption.  That which is left by God for you (after giving the rights of the people) is better for you, if you are believers.” (Quran 11:85-86)

After Prophet Shuaib issued his warning and the people chose to belittle and ignore him the promise of God was shown to be true.  God is the most Just, the Most Wise and He is the Ultimate Trustee, the One who can be relied upon to fulfil His promises.

“And when Our Commandment came, We saved Shuaib and those who believed with him by a Mercy from Us.  And a torment (or awful cry) seized the wrongdoers, and they lay (dead) prostrate in their homes.” (Quran 11:94)

Reliability, honesty and trustworthiness are characteristics that must be present in anyone who claims to be a believer.  The sayings of Prophet Muhammad indicate that dishonesty and betrayal are completely at odds with the Islamic faith.  Prophet Muhammad informed us that “A hypocrite is known by three traits: When he speaks, he lies; when he promises, he reneges; when he is entrusted, he cheats (or embezzles).” (Saheeh Al-Bukhari, Saheeh Muslim)

When Abu Ubayda was the commander of the Muslim armies in Syria, the Emperor of Byzantium set out with a large army to recapture Hims.  Abu ‘Ubaida decided to evacuate the city because he had only a handful of soldiers.  He gathered the people of Hims in the middle of the city and announced, “We collected the protection tax from you because we planned to defend you.  Now we are too weak.  In this case, we return the tax we collected.”  All the taxes collected were returned to the non-Muslim people of Hims.  Such was the depth of feeling and understanding displayed by the early Muslims.  They were constantly aware of their obligations towards  God, their brothers and sisters and those who were under the protection of the Muslim armies.

Trustworthiness is a quality that is essential if a society is to function as one unit, bearing in mind the needs and aspirations of all its citizens.  The Muslim nation should be one unit, one nation.  All members of this brotherhood should be able to stand before God knowing that he is safe and secure in the company of one who is trustworthy.  From the lowliest peasant to the mightiest king all are equal, the only thing that makes one member of the unit better than the other is his piety or righteousness.  Amongst the many qualities that blend together to make righteousness, is trustworthiness.

[1] Nourishment through, not only food, water, exercise and sleep but also through knowledge and closeness to God.