Kindness to Parents (part 2 of 3): The Value of Motherhood: Paradise is at Her Feet 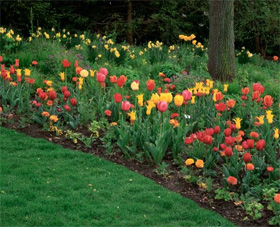 In several verses of the Quran, God makes clear that duty, kindness and gratitude towards parents is an essential part of Islam.  However, women in Islam, particularly mothers, have been singled out for the upmost respect and devotion.  God Himself tells of the hardships involved in motherhood.

In the time of Prophet Muhammad, a man asked permission to go on a military expedition.  The Prophet asked the man if he had a mother, when he replied yes, Prophet Muhammad said, “Stay with her because Paradise lies beneath her feet”.  (Ahmad, Al-Nasai)  What wonderful imagery these words invoke:  Mothers and children gazing at each other with love and gratitude.  Tiny hands closed within larger hands.  A touch to the face in times of stress and illness, or the warmth of a loving mother’s voice.  Images of mothers nurturing and caring for their children, in health or sickness, in good times, or trying times.  Paradise lies at the feet of mothers; but what exactly do these words mean?  Simply, the gates of Paradise are open for those who cherish and respect their mothers.

The role of the mother in the Islamic family is as equally important if not more as the role of the father, who is the provider and protector of his family.  Not only does she go through both the joys and difficulties of pregnancy and giving birth, she dedicates the whole of her life to nurturing and caring for her children.  It is her responsibility to raise and to educate them to be righteous and pious human beings.  She cooks, cleans, nurtures and educates, she is also responsible for their spiritual, emotional and physical health and well-being.  In return, children owe their mothers care, love, affection, respect and dutifulness.  The task God assigned to mothers is large and sometimes overwhelming.  Accordingly, the reward for a righteous mother is nothing less than Paradise and in this life, she is esteemed and honoured.

Who is Most Worthy of Good Companionship?

From only these two sayings of Prophet Muhammad, we are able to understand the importance of mothers in Islam.  However, in these days of materialism it is easy to forget that God obligated us to honour our parents, especially our mothers.  Sometimes we find ourselves uttering words of contempt or complaining about our parents.  This sort of behaviour is not from Islam.

God reminds us that Prophet John (known as the Baptist) was dutiful towards his parents both loving them and obeying them[1].  He said:

“O John!  Hold fast the Scripture.  And We gave him wisdom while yet a child.  And (made him) sympathetic to men as a mercy (or a grant) from Us, and pure from sins and he was righteous.  And dutiful towards his parents, and he was neither an arrogant nor disobedient (to God or to his parents).” (Quran 19:12-14)

Additionally, in the Quran, we are able to hear the words of Jesus; he describes himself by coupling  his obedience to God with his duties towards his mother Mary.

“Verily!  I am a slave of God.  He has given me the Scripture and made me a Prophet; and He has made me blessed wheresoever I be, and has enjoined  on me prayer, and alms, as long as I live, and dutiful to my mother, and made me not arrogant, unblest.” (Quran 19:30-32)

As busy as our lives may be it is of great benefit to look back at the lives of the Prophets, and our righteous predecessors, to see how they treated their parents, particularly their mothers.

Abdullah ibn Omar, a leading scholar from among Prophet Muhammad’s companions once saw a man carrying his mother on his back and going around the Holy House in Mecca[2].  He did not complain or show any signs of annoyance; rather he kept repeating a line of poetry comparing himself to a camel.  He looked at Abdullah ibn Omar and asked him whether by so doing he discharged his debt to his mother.  Ibn Omar said, “No.  You have not even paid back one twinge of the pain she felt when giving birth to you”.

Another companion from the early days of Islam, Dhibyan ibn Ali ath-Thowree also used to travel with his mother to Mecca.  The journey was long and very hot; on the side of the road during their travels, he would dig a little pool and fill it with cool water.  He would then turn to his mother and say, “Mother, sit in this water to cool yourself.”

Muslims who are obedient to God can never be unmindful or unkind to their parents.  Great reward is offered to those who treat their parents, especially their mothers, with affection and gentleness, but a stern warning is also given.  The danger of disrespect is illustrated in the following saying of Prophet Muhammad.

When she appeared, the Prophet asked, 'Respected lady, is he your son?”  She replied yes.  He then asked, “O respected lady, if we threaten to throw your son into a raging fire, would you recommend him to be forgiven?”  The lady replied that she would definitely ask him to be forgiven.  The Prophet then said to her, “Then declare, making God and me your witnesses, that you are now pleased with him.”  The old woman readily declared, "O God, you and your Prophet are my witnesses that I am pleased with this beloved son of mine.”  Then Prophet then turned to the dying man and asked him to recite, "There is no god but God, He is the One and has no partners and I witness that Muhammad is His Servant and Messenger.”  (At Tabarani, Ahmad)

Because of his mother’s forgiveness, the dying man was able to recite the words that, by the Grace and Mercy of God, may have allowed him to enter Paradise.  The good treatment of parents can be the key to Paradise, on the other hand, bad behaviour towards them may result in a punishment in hellfire.