Discovering the Real Jesus (part 2 of 6): The Gospel of John

Description: The transformation of Jesus in the Gospel of John. 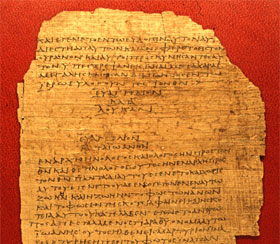 In the beginning, each gospel was circulated independently in the community it had been written.  Mark was probably composed in Rome, Matthew in Antioch, Luke in Ceaserea and John in Ephesus.  None of the gospel writers were eyewitnesses to life of Jesus, and very little if anything is known about them.

Now that the gospels are gathered together in the Bible, they can all be studied together.  Yet most readers today often forget or ignore what is in Mark and concentrate only on the “improved” version in Matthew, Luke and more specifically John.

When we turn our attention to John, the last gospel to be written, it is not surprising to note that Jesus is magnified and transformed into someone very different to the person found in Mark.  John’s Jesus is a powerful being, occupying a position somewhere between God and Man.  He is the logos, the Word of God, through whom God created everything.  He is no longer just a Prophet and Messenger of God, but rather God’s only begotten Son!

Although none of the gospels teach that Jesus is God, some of the statements found in the fourth gospel place Jesus so high above humanity that many readers deem this as enough proof of the later Christian claim to Jesus’ divinity.

For example, it is ONLY in the gospel of John, that we find the following statements:

It is of no surprise that evangelists and Christian apologists, when asked for textual proof for the divinity of Jesus, quickly rush to John’s gospel, since none of the above powerful self-testimonies are to be found in any of the other gospels.  Surely, if these words were part and parcel of the original words of Jesus, every gospel writer would have mentioned them.  It is implausible to believe that the writers neglected all of these core and fundamental teachings and busied themselves with lesser details in Jesus’ life.

Moreover, why was it that the term “father” or “the father” referring to God is only used four times in Mark, but a mammoth 173 times in John?  The most obvious deduction to be drawn from these statistics is that over the period spanned by Mark and John, there was an evolution and development of the traditions.  In Mark’s gospel, Jesus spoke of God as “God”, whilst after 30 years when John wrote his gospel, Jesus in the very same episodes calls “God” his “Father”.

In the earliest of the four gospels, Jesus appears very human and very much a prophet. In the last gospel, however, he appears much more divine, and much more like an icon.

It is for this reason that Mark’s gospel was rather neglected by the early church. It was less frequently copied by scribes, preachers rarely referred to it and it was read only occasionally in church congregations and services.

As stated earlier, the author of John’s gospel was not the only one guilty of changing the words of Jesus, Matthew and Luke also not satisfied with the depiction of Jesus in Mark set out to magnify the position of Jesus in a number of ways.  When we line up the gospels of Mark, Matthew and Luke (synoptic gospels) together, and compare them with one another, we will notice that the events and speeches are modified as we go from one gospel to another.