Description: The Prophet Muhammad’s journey through the heavens. 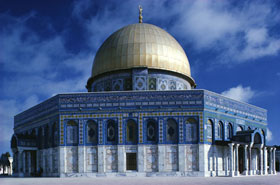 The Night Journey and the Ascension was a great blessing bestowed upon Muhammad, the Prophet of God.  It was a journey beginning at the Holy Masjid in Mecca, then moving overland to Masjid al-Aqsa in Jerusalem and finally continuing up through the seven heavens into the presence of God, the Almighty.  As we travel up through the seven heavens with Prophet Muhammad, it is important to remember that the places he visits are not part of Paradise.

In the English language, we generally use the word heaven to mean the spiritual plane of eternal happiness, the reward for a righteous life and the opposite of hell, the place of eternal punishment.  However, this was not always the case; the word heaven comes from the Old English word heofon,[1]  used to denote the sky, which is the area above the earth where the celestial bodies are.  Eventually, heaven lost its original meaning and came to imply Paradise.  In Arabic, however, there have always been two separate words used, sama and jennah.  The word sama is used for the skies above us, and they are part of the temporary world which will be destroyed on the Day of Judgement.  The word jennah, however, denotes Paradise, the land of eternal bliss, the permanent home of the righteous believers, and the opposite of Hell.

“Then He completed and finished from their creation as seven heavens in two Days and He made in each heaven its affair.  And We adorned the nearest heaven with light sources to be an adornment, as well as to guard.  Such is the Decree of Him the All-Mighty, the All-Knower.” (Quran 41:12)

“Their Lord gives them glad tidings of a Mercy from Him, and that He is pleased, and of Gardens (jennah) for them wherein are everlasting delights.  They will dwell therein forever.  Verily, with God is a great reward.” (Quran 9:21-22)

The Wonders of God

Prophet Muhammad ascended into the heavens from the rock now housed in the familiar golden dome that has become the symbol for Jerusalem.  This is a journey that no other human had ever made or has made since.  It demonstrates God’s ability to bring the seemingly impossible into being.  Here, the concepts of time and space as we know them do not apply, and it is beyond our human capabilities to understand the true omnipotence of God.  In his sayings and traditions, Prophet Muhammad described the size of the heavens; the first heaven, as compared to the second, is similar to a small ring in the desert, and he continued this narrative until he described the sixth heaven as being the size of a ring in the desert compared to the seventh heaven.  The magnitude of this is unimaginable.  Our earth, and what we call the universe, is contained within the first heaven.  Even with the scientific knowledge of the 21st century, we have no idea how big this is, how far the universe extends, or what wonders it contains.

Prophet Muhammad travelled with the Angel Gabriel up into the heights of the heavens.  Together they came to the gate of the first heaven, where Angel Gabriel sought permission to enter.  The gatekeepers asked, “Who is it?”  to which Gabriel replied, “It is I, Gabriel”.  The gatekeepers then asked who was accompanying him; when they were told it was Muhammad, they asked if he had been given his mission to guide all of mankind to the worship of One God.  Angel Gabriel answered in the affirmative, so the angels welcomed Prophet Muhammad, called his arrival a pleasure, and opened the gate.

Prophet Muhammad tells us that he saw his father Adam, the father of all of mankind.  He greeted him with the greeting of all Muslims, - Assalamu alaikum (may peace be upon you).  Adam returned the greeting and expressed his faith in Muhammad’s prophethood.  He called him his pure son, the pure prophet.  Imagine the pleasure that this meeting must have given to both men.  After thousands of years, Adam was able to see his son Muhammad, the greatest of his descendents.  Muhammad was able to look into the eyes of the father of mankind.  The wonders however were only just beginning.  Angel Gabriel and Prophet Muhammad then ascended to the second heaven.

At the gate, Angel Gabriel again sought permission to enter.  When the gatekeepers learned Prophet Muhammad had been given his mission and was trying to enter, they welcomed him and opened the gate.  There Prophet Muhammad saw the two cousins, Prophet John (known in Christian traditions as the Baptist) and the Messenger of God, Prophet Jesus;  Prophet Muhammad exchanged greetings with them.

Whenever Prophet Moses is mentioned in the Quran or in the narrations of Prophet Muhammad, we know that something important is about to be described.  After the two Prophets had exchanged greetings and Prophet Moses had expressed his faith in Muhammad’s prophethood, Moses started to weep.  When he was asked why, he replied: “A young man has come after me, and more of his followers will enter paradise then my followers”.

Until the advent of Islam, Prophet Moses had had the largest following of any Prophet.  Moses cried, and from this, we can understand that there was a type of rivalry between the Prophets; but it was not a competition filled with jealousy or envy. Rather, it was filled with compassion.  As we move further into the journey, we will see the love and compassion Prophet Moses had for Muhammad and his followers.  Prophet Muhammad and Angel Gabriel then ascended into the seventh heaven.