The Night Journey and the Ascension (part 2 of 6): Masjid Al-Aqsa

Description: Prophet Muhammad reaches the Masjid al-Aqsa and meets some of the previous Prophets of God. 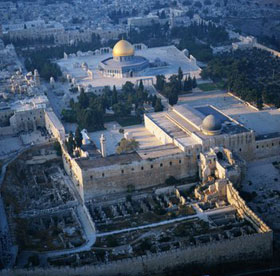 This was a difficult time in the life of Prophet Muhammad, and this journey was a great compliment to him.  The deliverance of the message was entering a new phase, and the establishment of the Muslim nation was about to begin.  Prophet Muhammad was feeling overwhelmed and alone.  The vast majority of Meccans had refused to heed his call or accept his message.  Both his beloved uncle and cherished wife had died, and this gift of God offered him support and opened his eyes to the signs and wonders of the universe.  After travelling the enormous distance to Jerusalem on the back of al-Buraq, Prophet Muhammad reached the area known as Masjid al-Aqsa. He dismounted and tethered al-Buraq to a ring in the gate.

Prophet Muhammad walked into the Masjid – the place of prostration - to be met by a group of the previous Prophets; he then had the great honour of leading them in prayer.  God rewarded His Messenger and caused him to understand that the Prophets before him also went through difficult times preaching to their people.  They stood behind Prophet Muhammad and acknowledged him as their leader.  This was another indication of his importance and excellence as well as the nature of his message.

Before the advent of Prophet Muhammad, all the Prophets delivered their message of submission to One God to their own people; Muhammad, however, had come for all of mankind.  God refers to him as a mercy.  God says in Quran:

“He listens to what is best for you; he believes in God; has faith in the believers; and is a mercy to those of you who believe.” (Quran 9:61)

The message was international, and this communication distributed worldwide was Islam.  The Prophets of God stood behind the newest and final Messenger of God and supported him when his need was greatest.  Prophet Muhammad mentions in his sayings that all of the Prophets are brothers.[1]  This congregation standing behind Prophet Muhammad was a sign of real and everlasting brotherhood.

The Significance of Al-Aqsa

The fact that this momentous occasion took place in Jerusalem is also of significance.  This is the land of the Prophets of God; this is the land of Abraham, Isaac, Moses and Jesus. God was forging a link between his Holy House in Mecca and Masjid Al-Aqsa in Jerusalem.  God was also linking the so-called cradle of religion, the Holy Land around Jerusalem, with the land of Arabia, the birthplace of the religion designed by the Creator, for all of humanity - Islam.

God established Al-Aqsa as one of the three Holy Masjids in Islam.  The Holy Masjid in Mecca, the Prophet Muhammad’s Masjid, yet to be established in Medina, and this Masjid in this blessed neighbourhood of Jerusalem.  It is only to these three Masjids to which Muslims can travel for the purpose of worship.[2]  One prayer in Masjid Al-Aqsa is worth 250 prayers elsewhere, excluding the Prophet’s Masjid where one prayer is the equivalent of 1,000 prayers and the Holy Masjid in Mecca where one prayer contains the reward of 100,000 prayers.[3]  God emphasized the significance and sacredness of Masjid Al-Aqsa, and for this reason it plays an important role in a Muslim’s life.   Therefore it is guarded and protected zealously.

Al-Aqsa was the first qiblah (the direction in which a Muslim turns to pray) in Islam, but this direction was later changed to Holy Masjid in Mecca.  Establishing the exact date for this change is difficult, but from the evidence, we can discover approximately when this occurred because the mission of Prophet Muhammad is divided into two distinct periods.  The Meccan period, defined by calling the people to the religion of Islam, and the Medinan period, defined by the establishment of the Muslim state.  Prophet Muhammad and the majority of his followers migrated to the city of Medina in the 14th year of Prophethood.

The Night Journey and Ascension took place late in the Meccan period, while the qiblah changed to Mecca around 15 months after the Prophet’s migration to Medina.  From this, we can infer that the Muslims faced Al-Aqsa when praying for approximately three years before God changed the direction to Mecca.  This by no means diminished the significance of Jerusalem or Masjid Al-Aqsa, it merely represented another step in the establishment of the message for all of humanity.  The Holy Masjid in Mecca was fixed as the central point in Islam.

The Journey and Miracle Continues

While still in the sacred precincts of Masjid Al-Aqsa, the Angel Gabriel presented Prophet Muhammad with two cups.  One was filled with milk, the other with wine, and both offered to the Prophet.  Prophet Muhammad chose and drank the milk.  Angel Gabriel then said to him “Thanks be to God, who guided you to the fitrah; if you had taken the wine, your followers would have gone astray”.[4]  It is difficult to translate the Arabic word fitrah into English; it denotes the natural and pure state in which one is born, an innate feeling that guides one to do the “right” thing.  Prophet Muhammad instinctively chose right over wrong, good over evil, and the Straight Path rather than the crooked path to Hell.

It was from the Holy city of Jerusalem, in the sacred precincts of Masjid Al-Aqsa[5] that Prophet Muhammad commenced the next stage of his miraculous Night Journey.  Prophet Muhammad ascended to the lowest heaven from a rock.  This rock can be found inside the Dome of the Rock, the most famous symbol of Jerusalem.  It should not be confused with the actual Masjid building, which is on the other side of the Al-Aqsa compound.  The entire precinct is the masjid, but many separate buildings exist there.  It is important to remember that although the Dome of the Rock is inside the Masjid compound, it is not Masjid Al-Aqsa and it is not the place of prostration where Prophet Muhammad led the previous Prophets in prayer.  From the rock, now covered by the familiar golden dome, Prophet Muhammad ascended to the lowest heaven in the company of Angel Gabriel.

[5] The compound is also known as “Temple Mount” in the West, after the temple that Solomon built there.