Stories of a Blessed Family (part 1 of 2): Prophet Zachary

Description: Zachary was the Prophet guardian of Mary, the mother of Jesus, and the father of John, the Prophet in the wilderness who was contemporary with Jesus. 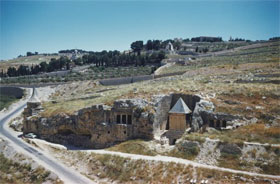 This is the story of a feeble old man who loved and feared God; an elderly man, named Zachary (also called Zachariah), who had spent his life gaining knowledge and teaching others, purely for God’s pleasure.  The Quran tells his story in Chapters 3 and 19, and it is similar to the story told in the Christian Gospel of Luke[1].  However, we will concentrate on what the Quran has to say about this blessed man because Muslim’s believe the Quran has remained unchanged since its revelation, whereas the previous messages have been lost, changed or distorted.

“This is a mention of the mercy of your Lord to His slave Zachary; Remember when he called out to his Lord (God) a call in secret, saying: ‘My Lord!  Indeed my bones have grown feeble, and grey hair has spread on my head, And I have never been unblest in my invocation to You, O my Lord!’”  (Quran 19:4)

Prophet Zachary was a member of the family of Imran, a blessed family whose members also included Jesus and his mother Mary.  When the young Mary went into the House of Prayer in Jerusalem, God, by His wisdom and grace appointed Zachary her guardian.  Each day he would visit Mary to be certain that all her needs were met.  Mary’s devotion to God impressed Zachary and he was amazed by the provisions he would find in her room.  It is said that she would have the fruits of winter in the summer and the fruits of summer in the winter.[2]  When Zachary inquired about how Mary obtained the fruits she replied that God, the Sustainer, was indeed the One who had provided her sustenance.  Mary said:

“It is from God.  Verily, God provides sustenance to whom He wills without limit.”  (Quran 3:37)

When Zachary observed Mary’s total submission to God and her unwavering faith in Him as the Provider, it opened his eyes to a new concept.[3]  No matter how overwhelming, or alternatively, insignificant our needs may feel to us, God is always there to listen and to respond.  This is a very important idea to contemplate.  God will give to His righteous slaves without limit.  Mary had received fruits out of season; Zachary made supplication for something that according to human standards was not possible, for he and his wife were very old and the time for them to conceive a child had passed.  The bounties of God are not constrained by worldly limitations, however, and anything is possible.  Zachary learned this important lesson from his ward Mary.

So Zachary called out to his Lord in secret, saying that he was old, his hair was grey and his wife was also old and barren; yet he desired an heir who was pleasing to God.  Zachary asked for a son to inherit from him; he was not thinking in terms of wealth, for he was a poor man.  He desired a son to continue the Prophethood and to spread the knowledge that Zachary had acquired over his life time.  God responded immediately, and said:

“Then the angels called him, while he was standing in prayer in a praying place, saying: God gives you glad tidings of John (Yahya), confirming the Word from God, noble, celibate,[4]  a Prophet from among the righteous.”  (Quran 3:39)

In this verse from Quran the “Word of God” has a specific meaning: Jesus, because he was created by a word from God - “Be” (and he was).  Zachary’s son, John, was to be amongst those who believed in and followed the Message of Jesus.

When Zachary received this astounding news he was standing in prayer.  He responded by asking how this could possibly happen, considering his old age and the barreness of hiswife.  God then confirmed the lesson Mary had understood.  “Thus God does what He wills.” (Quran 3:40).

Zachary asked for a sign, wondering how he would know that this miracle was really happening to him, and to his wife.  God replied that he (Zachary) would loose the power of speech and not be able to communicate, except with signals.  Zachary was instructed to spend time remembering and glorifying God, and he emerged from his praying place unable to speak.

The Quran tells us that Prophet Zachary and his wife performed good deeds, called on God with fear and with hope, and were humble, so God rewarded them, in their old age, with a son.

“So We answered his call, and We bestowed upon him John, and cured his wife’s barreness for him. Verily, they used to hasten on to do good deeds, and they used to call on Us with hope and fear, and used to humble themselves before Us.” (Quran 21:90)

This was no ordinary child.  John was granted wisdom while still a child and was instructed by God to hold fast to the Torah.  He was sympathetic and able to display compassion and mercy towards mankind.  God created John, righteous, and free from sin.

“‘O John! Hold fast the Scripture.’  And We gave him wisdom while yet a child, and made him sympathetic to men, as a mercy from Us, and pure from sins; and he was righteous.” (Quran 19:12)

The sincere supplication of an old man and his barren wife was accepted by God, and a valuable lesson was taught to all of mankind.  The bounties of God are limitless.  He is the Provider, The Sustainer, The One!

[2] Based on the work of Al Imam ibn Katheer.  The Stories of the Prophets.

[4] Ibn Katheer mentions in his commentary that the word used may not mean complete celibacy, for that would preclude children, but immunity from illegal relations outside marriage.  Its literal meaning is “exclusive” and “restrained” (Al Mawrid al Waseet Arabic English Dictionary), and God knows best.

Next: Stories of a Blessed Family (part 2 of 2): Prophet John