Stories of a Blessed Family (part 2 of 2): Prophet John

Description: The Prophet John, his character and mission, and the mutual support of his family, the family of Imran. 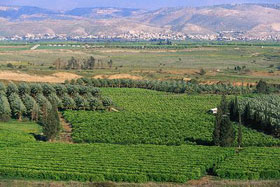 Jesus, Mary, Zachary and his son John are all members of the same family, the family of Imran, who are descendents from the family of David.  We learn from God’s own words, in the Quran, that they were righteous, and worshipped God with true submission.

“... and remember Our slave David, endued with power.  Verily, he was oft-returning toward God in all matters and in repentance.” (Quran 38:17)

John is the Prophet known by Christians as “John the Baptist.” However, neither the Quran nor the authentic traditions of Prophet Muhammad speak of John as either baptising or being baptised.  John’s mission was to remind the Children of Israel that they had entered into a covenant with God.  He spoke the same words as all of the Prophets of God – worship One God with full submission.

In their old age, when all hope of having a child was gone, God provided Prophet Zachary and his wife with a miracle child.  A son, the first child in the world named John.  God, Himself, chose John’s name.

“God gives you glad tidings of John, confirming the Word from God, noble, celibate, a Prophet from among the righteous.” (Quran 3:39)

We know from the Quran that Prophet John was given wisdom as a child, and  Islamic sources speak of him as being a  quiet, gentle child, who loved learning and being outside amongst the animals.[1]  John grew into a devout and noble man.  It is said that he lived a simple life in the wilderness or desert, spending his time praying and remembering God.  He was filled with compassion and mercy for those around him and all of mankind.  The scholars of Islam have said that John wept out of fear and love for God, and that his tears left marks on his cheeks.

John was given strength and fortitude by God and was strong enough to control his worldly desires.  He worked tirelessly, calling the people back to the laws of the Torah and endorsing the mission of his cousin, Jesus, Messenger of God.  Part of John’s mission was to believe in and support the message of Jesus;  “...confirming the Word from God ...” (Quran 3:39).  John refers to his cousin Jesus as the “Spirit of God“ and does so to place emphasis on the miraculous creation of Prophet Jesus.

In the authentic traditions of Prophet Muhammad (such as in Saheeh Ahmad, Tirmidi and others) there are stories relating to Prophets John and Jesus meeting and discussing their mission to guide the Children of Israel back to the straight path.  Prophet Muhammad tells us that John gathered the Children of Israel together, and beseeched them to follow the commandments of God.  To worship none but God; to pray; to fast; to give charity and to spend time remembering God.

God bestowed a special blessing upon his Prophet John.  “And peace be on him, the day he was born, the day he dies, and the day he will be raised up to life again!” This is the greatest blessing that can be bestowed upon a human being.  Peace – safety, security, contentment.  This is the inevitable result of following the guidance sent to us from God.

The Quran and the authentic traditions of Prophet Muhammad do not reveal the details of John’s death.  We do know, however, that he was reviled and persecuted because of his strong insistence on following the law of God as revealed in the Torah, and that this eventually led to his death.  John’s life was one of struggle and striving, but he held tightly to the religion of God (to worship One God Alone) and died for his beliefs.

The family of Imran is a guiding light for mankind.  Their devotion to God was unparalleled and their way of dealing with each other serves as a reminder to us.  Each parent is concerned with their child’s hereafter rather then the delights of this world.  Each child respects and deals with their elders and parents with the affection and dedication commanded by God.  The members of this blessed family served God with true devotion, and put His laws above all others.  And God said:

“So, as for those who believed (in the Oneness of God) and did deeds of righteousness, He will give their due rewards, and more, out of His Bounty.  But as for those who refuse His worship and were proud, He will punish them with a painful torment.  And they will not find for themselves, besides, God any protector or helper.” (Quran 4:173)

Mary was one of the Truthful, Jesus was the word of God, John was neither arrogant nor disobedient and Zachary glorified his Lord.  Together these descents of Prophet David are the blessed family of Imran, and they are an example to mankind.  If we struggle as they struggled, if we believe with certainty, as they believed, and if we serve God with full submission, just as they served God, on the Day of Judgement, by the Grace of God, we may be counted amongst the righteous.

Previous: Stories of a Blessed Family (part 1 of 2): Prophet Zachary