Description: Through his first meeting with a Muslim and then numerous chats about religion,  Michael sifts through the beliefs of various religions until he ends up accepting Islam. 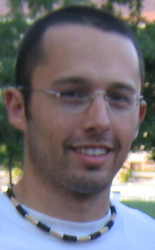 I am ethnically a Russian Jew.  My quest began when I was 19 years old.  I was recovering from my stint with Scientology (yes I was brainwashed into it).

My belief in God was uncertain.  My goals in life were to be a rock star.  I was living in my Pasadena apartment and working as a secretary.  Funny, I know.

One night I was walking to the kitchen, and encountered a dark fellow.  I remembered asking him: “Can I keep this vodka in the fridge tonight?”  We shook hands and went to sleep.  After that point, my life changed drastically…

This dark fellow, a Muslim, was the first Muslim I had ever met.  Extremely curious, I conversed with him about his faith.  What’s this stuff I hear about praying 5 times a day?  And about Holy War?  Who is this Mohammed guy?

Our talks were accompanied by our Christian roommate, Wade.  Together, we created “The Jewish, Christian, and Muslim dialogue sessions”.  In it, we discovered many differences, and many commonalities.

My interest had then shifted from sex, drugs, and parties, to a massive search for the truth.  A search that I had to complete.  A search for God.  And a search for how to follow him.

In my quest for the truth, I asked myself: “Ok let’s start simple, how many God’s do I think are out there?”  I figured only one; knowing that a divided God is weaker than One God; figuring that if one God didn’t agree with the other, there might be arguments and feuds.  One God was my choice.

Once I opened up my mind to the possibility of the existence of God, I analyzed both atheist and theist beliefs.  The thing that directed me to the latter was the quote “Every design has a designer”.  With that in mind, eventually I woke up with certainty that God exists.  I can’t explain why, I just felt it somehow.

This newfound excitement was accompanied by a sense of responsibility to follow the Creator.  The world of religion was my next frontier.

Then I asked myself, “Where do I start?”  There are literally thousands of them.  I need a way to narrow them down to a just a few.  How do I accomplish such a task?  “Find the ones that are monotheistic” entered my mind.  “Hey that makes sense, since I believe in only One God.”

Ok, then.  This ruled out Buddhism and Hinduism, both being polytheistic faiths.  The major religions I encountered that fell under the title of Monotheistic, where Judaism, Christianity, and Islam.  Well since I’m a Jew, I started with Judaism.  One God, some prophets, 10 commandments, Torah, Jewish souls…uh, what: “Jewish souls?”

While doing research this idea was brought to my attention.  The story goes, “if a person is born Jewish, then they have a Jewish soul, and they must follow Judaism.” Hold on a sec…that’s discrimination, isn’t it?  That’s not universal.

So God makes Jewish souls, and Christian souls, and Muslim souls, and Hindu souls?  I thought all men are created equal?  So, because one is born into a religion that means by the decree of God he must remain in it… even if the person believes it to be false?  Hmm…I don’t agree with that.

Another thing really bothered me…there is no strict concept of hell in Judaism…then why be good?  Why not sin?  If I don’t have fear of strict punishment, then why should I be moral?

Ok, next major doctrine: Jesus died for our sins and he did this because we all are polluted with “Original Sin”.  So, Jesus Christ, the “son of God”, had to be murdered to save everyone from Hell and cure us of our sin “given” to us by Adam.

Ok then, so are you saying that we are all born as sinners?  And to sin is to do something wrong right?  Then you’re telling me that a one-year old baby is guilty of sin or doing something wrong?  Ok that’s strange, so based on the actions of one man, all of mankind must suffer?  What’s the moral of that story?  Punish the whole group if one deviates?  Why would God create such a rule? That’s just not in agreement with my logic.

So Jesus died because he “loves mankind”.  Hold on, it says in the Bible that Jesus said “father, why have you forsaken me?”  So, apparently, Jesus didn’t understand why he was being brutally murdered.  But you just said he “volunteered” to be sacrificed.  Anyway, I couldn’t accept this belief.  Ok, what’s the next religion?

Islam.  Islam means submission.  The main beliefs are as follows: One God, worship God five times a day, give 2.5% annual charity, fast during Ramadan (to be closer to God and appreciate life…among other reasons) and finally journey to Mecca for Hajj if you are able financially.  Ok, nothing hard to understand so far.

There’s nothing that conflicts with my logic here.  The Quran is a book with all of these interesting miracles and timeless wisdom.  Many scientific facts only discovered recently where proclaimed 1400 years ago in this book.

Ok, Islam had passed my initial religious prerequisites.  But I wanted to ask some deep questions about it.  Is this religion universal?  Yes, anyone can understand these basic beliefs…no analogy or equation are needed.  Does it agree with science?  Yes, dozens of verses in the Quran agree with modern science and technology.

As I sifted through the countless logical facts that I read through and researched, one thing took my attention the most.  “Islam”.  The name of this religion.  I noticed it is written many times in this Quran.

However, recalling my prior studies, I didn’t remember once seeing the word “Judaism” in the Old Testament or “Christianity” in the New Testament.  This was BIG.  Why couldn’t I find the very name of the religions in those two books?  Because, there is no name in these books!  Thinking…I noticed that “Judaism” could be broken down to “Juda- ism” and “Christianity” could be respectively “Christ-ianity”.

So in recollection, we can deduct that the names of these religions are people’s proper names attached to “ism” and “ianity”.  Regardless of that fact, the very names of those religions are not mentioned in their scriptures.  I thought that was very odd.

Naming is the very basis which humans identify with objects, both physical and non-physical.  If religion is supposed to be practiced and spread to every person on earth, shouldn’t there be a NAME for it?

Moreover, shouldn’t the name be given to us from God Almighty?  YES, my point exactly.  The names “Christianity” and “Judaism” were not written in the Holy Scriptures.  Humans named them, not God.  The notion that God would ordain a religion for mankind to follow without a name is impossible for my mind to accept.

At that point, both Christianity and Judaism lost their credibility as pure, logical, and complete religions, at least from my perspective.

Islam is the ONLY of these religions to include the NAME of the religion in its scriptures.  This is so huge for me.

I realized I would follow Islam at that point.  I then became a Muslim.  I knew the truth.  I was out of the darkness.  I came into the light…

hello mr jim, i embrace you from the core of my heart in islam on behalf of the world muslim ummah.i really find no words to express my admirations of your ability to analyse most logically and reasonably the different faiths of the world.may god guide all human beings on the planet to find the actual truth,without being biassed or miguided by the different media and vested parties,whatsoever.may allah be pleased with us, ameen

I truly admire your logic and the way in which you have embraced Islam. Alhamdulillah, Islam is a religion which supports science and factual learning, and vice versa.

I am really very happy that you embrassed the true religion by birth every human being is born with, As we all are created by one God (Allah) and this is the message given by all prophets and messangers. My brother what i want to tell all that what we needed most in the present time is to present the true lessons and teaching of Islam to others. by our behaviour, attitude, acts and when dealing with others which our beloved prophet told us.

Very beautiful. May God be with you always.