Description: Jesus and his first miracle, and a brief account about what Muslims believe about him. 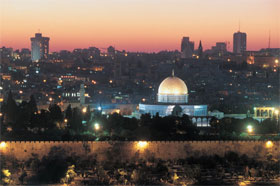 Christians often talk about developing a relationship with Christ and accepting him into their lives.  They assert that Jesus is much more than a man and died on the cross to free mankind from the original sin.  Christians speak of Jesus with love and respect, and it is obvious he holds a special place in their lives and hearts.  But what about Muslims; what do they think about Jesus and what place does Jesus Christ hold in Islam?

Someone unfamiliar with Islam may be surprised to learn that Muslims love Jesus too.  A Muslim will not speak the name of Jesus without respectfully adding the words “may peace be upon him”.  In Islam, Jesus is a loved and esteemed man, a Prophet and Messenger calling his people to the worship of the One True God.

In the Quran, God spoke directly to Christians when He said:

“O people of the Scripture!  Do not exceed the limits in your religion, nor say of God aught but the truth.  The Messiah Jesus, son of Mary, was a Messenger of God and His Word, which He bestowed on Mary and a spirit created by Him; so believe in God and His Messengers.  Say not: ‘Trinity!’  Cease;  it is better for you!  For God is One God, glory is to Him, Far Exalted is He above having a son.  To Him belongs all that is in the heavens and all that is in the earth.  And God is All Sufficient as a Disposer of affairs.” (Quran 4:171)

Just as Islam categorically denies that Jesus was God, it also rejects the notion that mankind is born tainted by any form of original sin.  The Quran tells us that it is not possible for one person to bear the sins of another and that we are all responsible, before God, for our own actions.  “And no bearer of burdens shall bear another’s burden.” (Quran 35:18)  However, God, in His infinite Mercy and Wisdom has not abandoned mankind to their own devices.  He has sent guidance and laws that reveal how to worship and live according to His commands.  Muslims are required to believe in, and love all of the Prophets; to reject one is to reject the creed of Islam.  Jesus was but one in this long line of Prophets and Messengers, calling the people to worship One God.  He came specifically to the People of Israel, who had at that time gone astray from the straight path of God.  Jesus said:

“And I have come confirming that which was before me of the Torah, and to make lawful to you part of what was forbidden to you, and I have come to you with a proof from your Lord.  So fear God and obey me.  Truly!  God is my Lord and your Lord, so worship Him.  This is the Straight Path.”  (Quran 3:50-51)

Muslims love and admire Jesus. However, we understand him and his role in our lives according to the Quran and the narrations and sayings of the Prophet Muhammad.  Three chapters of the Quran feature the life of Jesus, his mother Mary and their family; each reveals details not found in the Bible.

The Prophet Mohammad spoke of Jesus many times, once describing him as his brother.

“I am the nearest of all the people to the son of Mary, and all the prophets are paternal brothers, and there has been no prophet between me and him (i.e. Jesus).” (Saheeh Al-Bukhari)

Let us follow the story of Jesus through Islamic sources and come to understand how and why his place in Islam is of such significance.

The Quran informs us that Mary, the daughter of Imran, was an unmarried, chaste and pious young woman devoted to the worship of God.  One day while she was in seclusion, the Angel Gabriel came to Mary and informed her that she was to be the mother of Jesus.  Her response was one of fear, shock, and dismay.  God said:

Mary conceived Jesus, and when the time came for him to be born, she took herself away from her family and travelled towards Bethlehem.  At the foot of a date palm tree Mary gave birth to her son Jesus.[1]

When Mary had rested and recovered from the pain and fear involved in giving birth alone, she realised that she must return to her family.  Mary was afraid and anxious as she wrapped the child and cradled him in her arms.  How could she possibly explain his birth to her people?  She heeded the words of God and made her way back to Jerusalem.

God knew that if Mary tried to offer explanations, her people would not believe her. So, in His wisdom, he told her not to speak.  From the first moment Mary approached her people they started to accuse her, but she wisely followed God’s instructions and refused to respond.  This shy, chaste woman merely pointed to the child in her arms.

The men and women surrounding Mary looked at her incredulously and demanded to know how they could possibly speak to a babe in arms.  Then, by the permission of God, Jesus, son of Mary, still a babe, performed his first miracle.  He spoke:

“Verily!  I am a slave of God.  He has given me the Scripture and made me a Prophet; and He has made me blessed wheresoever I be, and has enjoined  on me prayer, and alms, as long as I live, and dutiful to my mother, and made me not arrogant, unblest.  And peace be upon me the day I was born, and the day I die, and the day I shall be raised alive!” (Quran 19:30-34)

Muslims believe Jesus was the slave of God and a Messenger sent to the Israelites of his time.  He preformed miracles by the will and permission of God.  The following words of Prophet Muhammad clearly summarise the importance of Jesus in Islam:

[1] For details of his miraculous conception and birth, please refer to the articles on Mary

Great article subhanallah. I love reading these articles. Keep up the good work.

Great article, infact i enjoyed reading this, may ALLAH be with you,(Assalama Lakum).