Description: The Beginning of idolatry and the call of Noah. 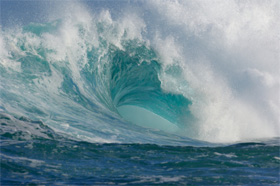 The accounts of the flood in the Jewish and Christian traditions acknowledge Noah as being a righteous man in a world crushed under the weight of sin and disbelief.  The Quran and the sayings of Prophet Muhammad, may the mercy and blessings of God be upon him, teach us that Prophet Noah was a beacon of hope among the descendants of Adam in an era where sin and lawlessness had overtaken the people.

Mankind had been one community believing in the Oneness of God, but confusion and deviation had crept in.  Noah was a calm, patient man who called his people to return to the worship of the One True God.  He was an exceptional speaker, enjoining those around him to leave the worship of idols, and to hear his warning of a terrible punishment for those who venerated idols and statues.

Noah narrated stories about the mysteries of life and the wonders of the universe.  He described how the day, which gives sunlight and activity, followed the night that gives coolness and rest.  He spoke of God, the Divine Creator Who owned heaven and earth, and he pointed out the wideness and beauty of the earth.  Noah explained that the creation of the world was for the well being of mankind; but that man also had an obligation to understand this and direct his worship to God, not false deities.  When Noah began to speak of the punishment that awaited idolaters, his people became resentful and angry.[1]

Prophet Muhammad informed us that there were ten generations between Prophets Adam and Noah.[2]  We know that this was a very large period of time, as Noah himself lived over a century, and people before lived even longer.

In those years, between Adam and Noah there were generations of people that remembered the laws taught by Adam and worshipped God correctly.  The years passed and the people forgot; at times, the righteous men amongst them reminded the people of their obligations to God.  As time continued to move on, the righteous men began to die, and Satan came whispering to the people who had looked up to them, putting thoughts into their minds in his sly, cunning way.

Satan inspired the good people to make statues of the righteous men.  In this way, Satan said, they would remember the righteous people and thus remember to worship God.  The good people built statues in their meeting places and their homes, and Satan left them alone until everyone had forgotten the reason the statues existed.  Many years later, the devious Satan appeared amongst the people again, this time suggesting that they worship the idols directly.

“The names (of the idols) formerly belonged to some pious men of the people of Noah, and when they died Satan inspired their people to prepare and place idols at the places where they used to sit, and to call those idols by their names.  The people did so, but the idols were not worshipped till those people (who initiated them) had died and the origin of the idols had become obscure, whereupon people began worshipping them.” (Saheeh Al-Bukhari)

The word Prophet (Nabi in Arabic) is derived from the word Naba, meaning news.  Revelation is given by God and, in turn, the Prophet spreads the news amongst his people.  A Messenger, on the other hand, is sent with a specific mission, usually to convey a new ordainment from God.  Every Messenger is a Prophet, but every Prophet is not a Messenger.[3]  Since this was mankind’s first deviation from the correct worship of God as taught by Prophet Adam, God, in his infinite Kindness and Mercy, fulfilled His promise to Adam to send messengers as guidance for mankind.  God sent Noah, the first of His Messengers.[4]  Abu Hurairah narrated that the Prophet Muhammad said:

“On the day of Judgement, the people will come to Noah and say ‘Oh Noah, you are the first of the Messengers sent to earth, and God called you a thankful slave.’”(Saheeh Al-Bukhari)

Worshipping anything other than God has grave consequences, the least of which is a lack of freedom; for Satan enslaves man, destroys his mind and renders him unable to distinguish between right and wrong.  When Noah warned his people of the torment that awaited them if they did not give up their idolatry, his warning fell mostly on deaf ears.  Noah explained Satan’s deceit, but his people turned away and refused to listen.  Noah warned them day and night; he announced his message in public and he spoke quietly to people privately; yet all, but a few, denied his words.  Noah cried out to God.

“He said: ‘O my Lord!  Verily, I have called my people night and day (secretly and openly to accept the doctrine of Islamic Monotheism), but all my calling added nothing but to their flight from the truth.  Verily!  Every time I called unto them that You might forgive them, they thrust their fingers into their ears, covered themselves up with their garments, and persisted (in their refusal), and magnified themselves in pride.” (Quran 71:5-7)

Those who responded to Noah’s call were the weakest and poorest of his people; the leaders and those with power responded arrogantly and rejected the call.  They said:

Noah continued to appeal to his people, day after day and year after year.  For 950 years he endured their taunts and mockery.

These are brief but excellent presentations.

This website is so helpful; it explains everything so well! Thank you so much!