Description: How the call to pray (Adhan) had an everlasting impact on Dr. Chris.  Part 1: Early childhood, struggle during teenage years, and trip to Morocco. 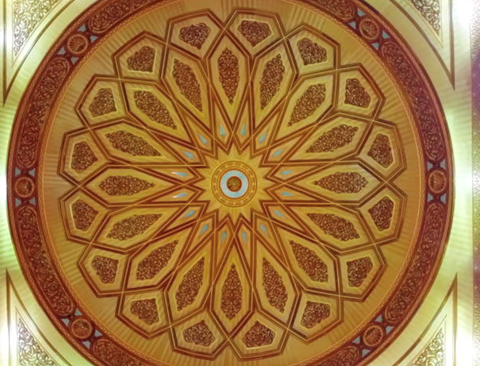 I took my Shahada on 17th May 2021. I expected it to be difficult, but it was remarkably easy, it was also very emotional. People warned me that I might cry, but I did not believe them. However, the words caused my eyes to be filled with tears, like those of a newborn baby. It also brought me back to my childhood and raised many memories.

I was born in England in 1948, when the Second World War was still raw in the minds of everyone. The family home had been destroyed in the Blitz so my parents and grandmother moved into a new house about thirty miles from the centre of London. It took a while for them to settle. By the time I started school, there were still unpacked boxes sitting in my grandmother’s bedroom and like any small child I was curious to see what was in them.

One day my grandmother and I started unpacking the boxes. In the first box there were many old books. They were my grandmother’s treasures, she was a very scholarly woman. She took out two volumes, which she said were very important and she showed them to me. The first was the Torah and the second was a copy of the Qur’an. The Torah had a plain black cover and it was the Holy book of the Jews. My Grandmother kissed the cover before placing it at her bedside. The Qur’an was very different, it had been brightly decorated in a blue geometric pattern and the letters were embossed with gold leaf. It looked more like a jewelry box and it was very beautiful. Seeing the smile on my face, my grandmother handed the book to me for further inspection. The text was written in a language that was unfamiliar to me, it looked as though someone had scribbled across the page. My grandmother told me the book was written in Arabic and it was acquired in Egypt by my grandfather when he had been stationed there during the First World War. The Qur’an was also placed beside my grandmother’s bed, not for any religious significance, but in memory of my deceased grandfather.

My parents were past middle age when I was born and my father had tuberculosis so my mother had to earn the income. From birth I was cared for by my grandmother, she was my nurse, my teacher, my mentor and my trusted friend. After my grandmother’s death I was raised by paid help and our Jewish traditions were largely forgotten.

We lived in a Christian country so I went to a state school where Christianity was the given religion, I hated it! The lessons never seemed right to me. I was told that Jesus was the son of God, so where was God's wife I wondered.

I was always in trouble at school and I was always being punished. I got the cane across my hands or I was kept in after school and had to walk home in the dark. It was not unusual to be set upon by groups of older school pupils.

During those early years I grew into a very angry young person. I saw the world as being full of injustice. As a teenager I was very withdrawn and lived my life through books, the same way my grandmother had done when something troubled her.

My father died when I was fifteen. A year or so later my mother sold the house and went to live with her sister. I was pushed into a marriage which lasted for only a few months. I left England and travelled with friends across France and Spain to Morocco. Very few westerners had been further than Madrid in those days so going to Morocco was a big event. The journey was long and tedious in an overcrowded six-seater bus, but we made it to Tangiers and then on to Marrakech.

Marrakech was amazing. It felt as though I had stepped into a dream, everything around me was brightly coloured, it was rich and noisy with exotic music and seductive perfumes. The weather was hot and the atmosphere was very engaging. I felt a sense of belonging that tugged at my heart-strings.

I was staying in a small room above a café in the Medina overlooking the Jemaa el-Fnaa market. On the first night I stood on the balcony overlooking the market breathing in every aspect of this unfamiliar culture. The bright orange sun was just moving above the horizon when suddenly I heard a strange and haunting sound. One of my companions told me, it was the call to prayer. It felt like angels had descended over the landscape. My grandmother used to tell me stories of angles and as a child, they had me captivated. My skin turned to goosebumps and I was having to catch my breath to ward off the tears that were rising inside me. I could not say whether the tears were of joy for being in this beautiful place or grief for the loss of my grandmother, but something had changed in me. I felt like an arrow had touched my soul. It stayed with me. I never let go of that haunting sound of the call to prayer, it would visit me regularly, often when I was feeling tired or low.

Description: Description: How the call to pray (Adhan) had an everlasting impact on Dr. Chris.  Part 2: A desire for equality and justice and finding Islam to provide solutions to humanity, finally led her to convert to Islam.

I knew very little about Islam, except like Judaism, there was only one God. Then on one Friday evening the New York Central Synagogue invited the local Imam to share the Jewish service. The Rabbi prayed in Hebrew and the Imam prayed in Arabic. It reminded me of Marrakech. Every Jewish Shabbat after that I carried the Imam's prayer in my mind.  I prayed in Hebrew and in my mind I could hear the Imam praying in Arabic.

After I returned from Morocco I worked in London for several years and then travelled to South Africa. I took up residence in Johannesburg. There I learned the meaning of apartheid. Having grown up with antisemitism, apartheid did not sit well with me. It was a cruel dehumanizing structure of torture and oppression. I could not stay silent. I was working as an artist and expressing my views in my work, but the galleries would not take my paintings, they were too political.  However, after several years I had gathered a radical following, but it became too dangerous to continue my protest so I very discreetly took a night time flight out of Johannesburg to Rome. I left with just one change of clothes and seemingly before the authorities came knocking at the door of my South African residence.

After a few weeks I was back in London working for a major news corporation and planning a trip to Australia. I spent two years in London before leaving. The country of Australia was not what I expected, people called it the 'lucky country', but it was only beneficial to those who were white, middle class and male. For several decades Australia had promulgated an All White Australia Policy and the indigenous people, whose numbers were greatly reduced by massacres, lived in terrible poverty with no human rights or status.

I had inherited a sense of justice, so in Australia my campaigning started over again. While still at school I had joined the peace movement. In South Africa I had tried to set up multiracial unions. In Australia I joined the Womens’ Electoral Lobby and sat on the boards of the Crime Prevention Council and the Council for Civil Liberties. I was also on the committee of the Human Rights Association. My life was spiraling towards a political career, but there was something greatly missing.

Several years passed before I went to university and took comparative religious studies. Judaism became meaningful in my life once again, but for different reasons. I was not a Zionist and I was against nationalism. I believed in one God, one people and one religion. I tried to fit Judaism into this picture, but it was like putting a square box into a round hole.

More recently, I devoted twelve months to creating a collection of paintings based on the Torah which went on exhibition at the Jewish Arts Centre in Melbourne in 2019. It felt nice being back in the fold, but when the exhibition was over and the exhilaration had died down, I was still feeling a lack of commitment.   I left the city and went back to my rural property even more aware of the grievances I had with Judaism. I tried to sugar-coat my feelings with positive affirmations, but the peace activist in me kept recalling the faces of children caught up in the Middle East wars... Iraq, Afghanistan, Yemen, Palestine. I had campaigned against all of them. Against these scenes there was the valourization of Israel.  My Israel! What had they done to it?

It was Israel's latest attack on Palestine in 2021 that was the final straw for me. I was reading news reports between watching YouTube videos on Islam. Islam was a religion of peace. The west had greatly distorted the meaning of Islam. Western nations were renowned for rescuing people from tyrannical rule, but when did they ever come to the rescue of Muslims?  There were many questions on many issues.

I bought a copy of Seyyed Housein Nasr's Study Qur'an and began reading it. I came to believe that Islam had answers to some of the world's most crucial social problems, so I made the decision to become a Muslim. I want to see change. I am 73 years old, but it is not too late to want to be a part of that conversation.