Islam in Central Asia (part 2 of 2): From revolution to Islamic revival

Description: The Russian Revolution changed the face of Islam in Central Asia, but when the USSR fell, Islam emerged, relatively unscathed. 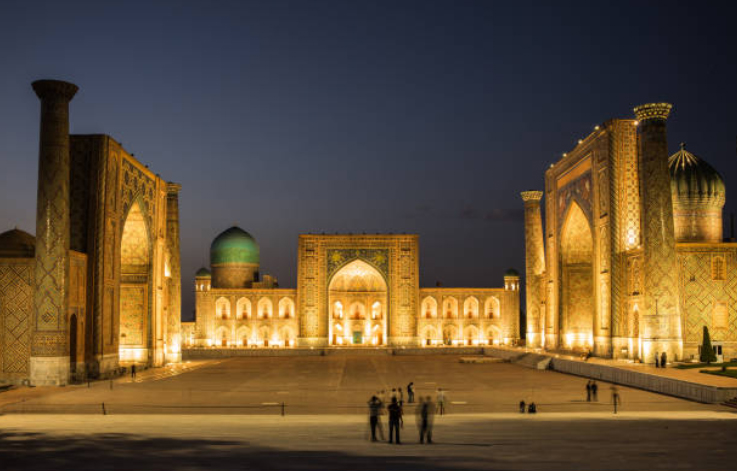 In December 1917 Vladimir Lenin and Josef Stalin signed an appeal to the "Muslims of Russia, Tatars of the Volga and Crimea, Kyrgyz, and parts of Siberia and Turkestan, Turks and Tatars of Trans-Caucasia, Chechen and Mountain peoples of the Caucasus, and all of you whose mosques and prayer houses have been destroyed, whose beliefs and customs have been trampled upon by the Tsars and oppressors of Russia:  (declaring that) your beliefs and usages, your national and cultural institutions are forever free and inviolate.  Know that your rights, like those of all the peoples of Russia, are under the mighty protection of the revolution."[1]

At the time of the Russian Revolution, many Muslim reformers known as Jadids attempted to work within the Soviet system.  Thus, in parts of Central Asia, Muslims accounted for 70% of Communist Party membership, and the Bolsheviks[2]  were determined to keep their support.  Islamic books and objects looted by the Russian Empire were returned, and the Quran of Uthman was ceremoniously returned to the Muslim Congress.  Friday was declared a legal day of rest in Central Asia, and by 1921 a Sharia legal system was put in place to work beside the Soviet legal system.[3]  However, although gaining the trust of the oppressed minorities in the Russian Empire was essential to the Bolshevik cause, when all opposition was brought under control, Lenin turned his attention to eradicating religion.

The Russian Revolution began by implementing strict Marxist doctrine declaring that the state should be non-religious not anti-religion.  Believers who considered themselves revolutionaries were welcomed into the Bolshevik ranks, however, religious tendencies began to grow stronger rather than falling away.  Attacks on religion, particularly Islam in the Central Asia region, began under the banner of combatting crimes based on custom.  The Bolsheviks believed that the so-called liberation of women would pave the way to socialism.  One particular method used to sideline Islam was mass unveiling.

The Hujum (storming or assault) campaign took place in Uzbekistan (and Azerbaijan).[4]  It was marketed as a campaign to liberate Central Asian women encouraging and then demanding that they unveil.   On International Women’s Day (March 8th) in 1927, after two years of ineffective propaganda, the Hujum entered a new phase.   At mass meetings, women were called upon to unveil.  In small groups they were expected to come to podiums, declare their liberation, and throw their veils off ceremoniously.

The Hujum was a failure.  Although many women embraced unveiling others protested, sometimes violently, that they were not oppressed by the long horsehair veils that were the custom of the time and place.  It has been suggested that the Hujum was initiated not only for revolutionary liberation but as a means of undermining Islamic clergy and religious traditions.  However, despite the USSR’s efforts to eliminate religion, they did not succeed to any great extent until efforts were made to outlaw the Arabic language.  The deconstruction of language is often the first step in destroying a culture.  In 1930 Arabic was replaced with the Latin Alphabet, and the Muslims were unable to read or connect with the Quran.

During World War Two restrictions on Islam were somewhat relaxed because the Soviet government required the support of all its citizens to fight what they called the Great Patriotic War.  In 1943 the Spiritual Administration of the Muslims of Central Asia and Kazakhstan (SADUM) was established and charged with training clergy and publishing spiritual material under the careful control of the government.   As religious persecution subsided, mosques began to reopen, and by 1949 there were 415 registered mosques in the USSR.  Through the 1940s and 50s, the Soviet authorities began to view Islam as either good or bad.   ‘Good’ Islam was compatible with socialism.  It was represented and controlled by state-appointed clergy and did not require any beliefs or practices; rather it was framed as part of Central Asia’s national heritage.   ‘Bad’ Islam, on the other hand, held that there was a higher authority than the Soviet State.  It was framed as a trick used to lead people away from the ideals of the USSR.  It was considered to be a dangerous social force and a threat to Soviet power.  Islam did, however, flourish underground, in tea houses, on collective farms, and in other innocuous spaces.  For the next thirty years, religious observance continued and was widespread; it became a matter of national identity.  Each Soviet put emphasis on being populated by many nationalities all united under the banner of the USSR.  Islam was secondary to national identity; Central Asians were Muslims by tradition, but were also part of the modern USSR.

A guide in Bukhara told National Geographic in 1971, "I remember my mother and father speaking Arabic at home.  But my comrades of this generation find no need for Allah and His prophet.  Visit a mosque nowadays and you will see mostly the white-haired."

In the 1980s Islam took on a greater role in the lives of the people in the five Central Asian republics.  This was a result of changes brought about by perestroika and glasnost.[5]  The Muslims dissatisfied with party control of the religious institutions demanded more say in their religious lives.  A religious revival by people eager for the moral values no longer under attack in the USSR demanded expressions and symbols of Islam in public life and public spaces.  Thus, piety increased, and Islamic publications came back into print including in the Arabic language.  Religious education became possible once again.   During this time in Tajikistan, more than 70% of Muslim students considered themselves to be believers.[6]

On December 25th, 1991, Soviet President Mikhail Gorbachev announced the dissolution of the Soviet Union.  Using the words, "We’re now living in a new world.  " In the 1920s, the Soviet government had imposed borders bringing the five nations into existence; thus, they had never before been independent nations.  However, when the USSR dissolved, they chose to maintain the Soviet borders and Kazakhstan, Uzbekistan, Turkmenistan, Tajikistan, and Kyrgyzstan joined the Muslim world as independent nation states.

The Islamic revival in the Central Asian republics was, and still is, supported by the Muslim world.  Once their borders were opened, delegations, missions, and organizations, particularly from Afghanistan, Pakistan, and Saudi Arabia, played a significant role in reviving Islam.   They funded mosques and schools, and supplied Qurans and other Islamic literature in Arabic, Russian, and Central Asian languages.

All five states still use Soviet-style mechanisms of dealing with Islam.  Soviet legislation on religious affairs has been replaced by new versions that unfortunately do not significantly alter the relationship between state and religion.  For instance, in Uzbekistan, a person can only legally worship in mosques operated by the Muslim Board of Uzbekistan.  Similar legislation exists in Kazakhstan.

Since the fall of the USSR, Islam in Central Asia has once again re-emerged.  In 1912, there were about 26,000 mosques in Central Asia.  By 1949, there were just 415 mosques in the entire USSR.  In 2004, there were 2,500 mosques and dozens of religious schools throughout the Central Asian states.  The statistics tell a tale of a slow yet steady and upward revival.  When the Mongol hordes swept into Central Asia, Islam stood like a tree being battered by the wind until it could arise once more.  It waited patiently for seventy years during the Soviet rule and then rose once again; strong and silent, and strengthened by God.

Crouch, D.  "The Bolsheviks and Islam." International Socialism at http://isj.org.uk/the-bolsheviks-and-islam/.

Hunter, S.  "Islam in Russia: The Politics of Identity and Security".  Routledge London, 2016.

Ro’i, Yaacov.  "Nationalism in Central Asia in the Context of Glasnost and Perestroika." In: Gitelman Z.  (eds) The Politics of Nationality and the Erosion of the USSR.  Palgrave Macmillan, London 1992.

[1] Hunter, S. "Islam in Russia: The Politics of Identity and Security".

[2] Bolshevik - a member of the majority faction of the Russian Social Democratic Party, which seized power in the October Revolution of 1917.

[6] Ro’i, Yaacov. "Nationalism in Central Asia in the Context of Glasnost and Perestroika."