Description: All revelations came from the same source, and the prime message has remained the same, namely the Oneness of God and the inevitability of the Day of Judgement. 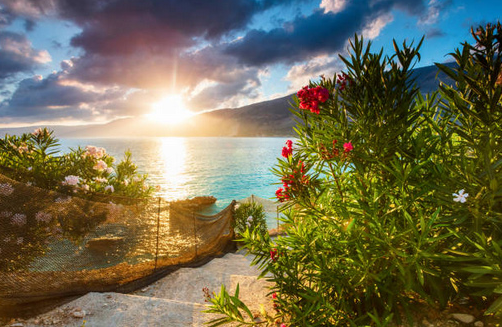 The Consultation is a fifty-three verse chapter revealed in Mecca. The name is derived from the word consultation that is mentioned in verse thirty-eight describing the characteristics of a community of believers. Being a Meccan chapter revealed before the migration to Medina it concentrates on the fundamentals of faith, in this case, God’s all prevailing power and wisdom. Prophet Muhammad, may the mercy and blessings of God be upon him, is reminded that he cannot force people to believe and that he is only required to deliver the message.

Verses 1 – 9 All power belongs to God

The first two verses are Arabic letters. Ha Mim, Ayn Seen Qaf. They are five letters from among various combinations of fourteen letters that open twenty-nine chapters of the Quran. God did not reveal what meanings they may or may not have.  Usually after these letters we learn something about the Quran. In this case, God says that He sent His revelation (Quran) to Prophet Muhammad, as He sent revelation to other messengers before him.

The heavens almost break apart because of their awe of God’s majesty.  The angels glorify and praise God; while begging forgiveness for the people on earth. As for those who worship other than God, God is watching what they do, and Prophet Muhammad is not responsible for them.

Thus this Quran is revealed in Arabic.[1]  It warns the residents of Mecca and surrounds that there will be a Day of Judgement when some will go to Paradise and others will go to the blazing Fire. If God wanted He could have made you a single nation, but He did not. He takes into His mercy those who desire His guidance and the wrongdoers have no one to help them. God gives life to the dead, and He has power over all things.

God judges all disputes. He makes mates for you from among yourselves (and the animal kingdom too) in order to multiply your numbers. The keys to the heavens and the earth belong to Him. And He gives abundantly or sparingly to whomever He wills.

God has ordained for you, the same way of life (Islam) that he ordained for Prophets Noah, Abraham, Moses, and Jesus. Those who associate others with God find it difficult to accept what you (Prophet Muhammad) invite them to. Long ago they were one religion but became divided out of rivalry. So invite them back to God.

Tell them (Prophet Muhammad) that you believe in what God has revealed and say that there is no need for argument, the truth has been made clear and those who refuse do so out of stubbornness and worldly desires. Those who argue with the truth will have a terrible punishment. God has sent down the Quran in truth and justice so what will make you understand that the Hour is near. It is only those who do not believe in it that want to hasten its coming. Those who believe in it are fearful.

Those who desire Paradise in the Hereafter will have their rewards increased many times over, but those who desire the luxuries of this world with no thought of the Hereafter will have what they desire but they will have no share in Paradise. Or have those that they worship besides God ordained a religion God does not know about? They think they are living a great life, free of morals and manners, but on the Day of Judgment their punishment will be a painful one. Those who believe and do good deeds will be in the gardens of Paradise. This is good news and a great bounty. Prophet Muhammad asks for no reward for this good news, and those who do good deeds will be repaid many times over.

How can people say Muhammad has invented a lie about God? God blots out falsehood and vindicates the truth. He knows what is in the hearts, accepts repentance, answers prayers, and gives more to those who believe and do good deeds. If God sent plentiful provision for everyone some would act insolently, so He provides in due measure. He sends relief after people have lost hope and He spreads mercy.  The creation of the heavens and the earth and the living creatures are among His signs. He can gather them together at any time. You cannot escape God and He is your only Protector.

Ships sailing on the seas are among His signs. They drive through the ocean like mountains, but He can bring them to a standstill or sink them with violent winds. Whatever pleasure you have been given is no more than a fleeting enjoyment of this worldly life—what is in the Hereafter is better and more lasting.  It is for those who believe and put their trust in Him, avoid major sins, forgive when they are angry, establish prayer, determine their affairs by consultation, spend from what God has given them, and defend themselves from tyranny.

The retribution for an evil act is one like it, but forgiveness and reconciliation are better. But those who avenge themselves are not blamed. The blameworthy are those who oppress others and act with injustice. They will have a painful punishment.

Verses 44 – 53 Only deliver the message. God retains all control

There is no protection for those God sends astray.[2]  They will face the punishment and hope there is a way back. But they will remain in lasting torment and have no allies to help them. So respond to your Lord before this Day comes and the punishment cannot be averted. But if they turn away Muhammad, you are not responsible; your duty is only to deliver the message.

God does not speak to human beings except through inspiration, or from behind a veil, or through a messenger such as the angel Gabriel. And so We have revealed to you Muhammad, an inspired book, this Quran. You did not know of this Book and faith before, but We made it a light by which to guide whoever We choose. And Muhammad, you guide to a straight path, the path of God, Who owns everything in the heavens and on the earth. Everything will return to God.

[1] Revelation from God was not only revealed in Arabic; previous revelations were revealed in the language of their prophets. Islam tells us that revelation was sent to all nations. The final revelation, the Quran, was revealed in Arabic because Prophet Muhammad was an Arab and his first audience were Arabs. The miraculous nature of the Quran also has to do with Arabic.  The Arabs had a keen appreciation for language and its structure and recognized upon hearing the Quran that it must be from the divine. The Quran’s literary challenge still stands today.
The majority of the world’s Muslims are not Arabs, but the Arabic language unites them across borders and nationalities.

[2] God gives everyone many chances to believe. But if His guidance is continually rejected, disbelief covers a person’s eyes, ears and heart. However there will always be another chance, right up until the moment of death.