Description: God is described as the Forgiver, the story of Pharaoh and Moses, and the Prophet is urged to be steadfast. 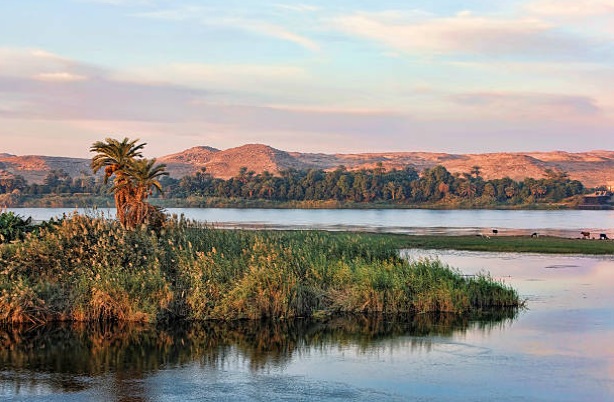 It is generally accepted that this chapter was revealed directly after chapter thirty-nine.  Thus, it was revealed in Mecca and is one of the chapters that examine the fundamentals of faith.  It reminds us of God’s signs and favors and gives glimpses from the story of Moses and Pharaoh with life-changing lessons for us.  It also provides reassurance to Prophet Muhammad, may the mercy and blessings of God be upon him.

This chapter begins with the Arabic letters Ha and Mim.  The placement of Arabic letters at the beginning of a chapter is a narrative device used in this and 28 other chapters of the Quran.  The reason and the meaning for this is the subject of much scholarly debate, however, the answer is known only to God.

This Book is sent down by God, the Almighty, the Forgiver of sins, the Accepter of repentance, and the One Who Bestows blessings.  None has the right to be worshipped but Him.  Only the disbelievers dispute His revelation, so do not be deceived by their prosperity and luxurious life.  In the past, the people of Noah and other communities tried to destroy their messengers and refute the message.  But it was God Who destroyed them with a terrible punishment, condemning them to the Fire.

The angels who carry and surround the Throne celebrate the praise of their Lord and ask for forgiveness for the believers, and that they be admitted to Paradise and kept safe from the Fire.

God shows His signs such as sending water down to sustain life, yet no one learns a lesson from this except those who turn to Him.  So be sincere no matter how much the disbelievers dislike it.  He is the Lord of the Throne and sends revelations to whomever He wills.  On the Day of Judgement each soul will account for their actions and no injustice will be done.

Have they not traveled and seen what happened to those who were mightier in strength and numbers? God destroyed them and they had no one to defend them because they repeatedly rejected their messengers.

Moses was sent to Pharaoh, Haman, and Korah with God’s authority but they called him a magician and a liar.  They rejected the truth and ordered the sons of the believers to be killed.  Finally, Pharaoh said he wanted to kill Moses himself.  And Moses sought refuge with God.  A believer among the relatives of Pharaoh advised him to think carefully about why he would kill a man who might be speaking the truth.  Pharaoh knew Moses was right but lied and said he was only saying what he believed to be right and that he was guiding to the right way.  The believing advisor warned his people against how previous disbelieving nations were destroyed.  He reminded them about Joseph who came with clear signs, but their doubt remained.  Rejecting the truth with clear signs is a despicable attitude, and God seals the heart of the arrogant ones.  Pharaoh persisted in his rejection and defiance, and his schemes led only to destruction.

The believing advisor urged people to follow the right way.  He said that this life was only temporary while the home in the Hereafter was permanent.  He invited them to Paradise while they invited him to the Fire.  God saved him from their terrible plots, and the people of Pharaoh were taken over by a terrible scourge.

On the Day of Judgement, the people of Pharaoh will enter the severest part of the Fire.  They will argue with each other about who led who to destruction and beg for relief.  They will be reminded about their messengers and told their pleas would be in vain.  God supports the messengers and the believers.

God made the night for rest and the day bright to make our day to day activities easy.   He is the Creator of all things; none has the right to be worshipped except Him.  Why then are you deluded? The earth is a settlement place and the sky a canopy.  God molded your form and perfected it, then provided you with good things.  He is One and there is no deity but Him, so call on Him and be sincere to Him.  O Prophet, tell your followers that you have been forbidden to worship what they worship and you have been commanded to submit to the Lord of all the worlds.

God created you from dust (referring to Adam), then from a sperm-drop, then developed you into a clinging clot, then you are born from the womb of your mother, and He allows you to grow to your full strength and maturity before you reach old age and the appointed term of your life, although some of you may die sooner.  God gives life and death.  He only says ‘Be’ and it is.

Those who deny the Quran and that which the messengers brought, will soon know the consequences of their deeds when they are punished in Hell with chains around their necks being dragged through scalding water.  They will be asked about those they associated with God and will admit that they have failed them.

Prophet Muhammad is advised to be patient because God’s promise is true.  There are stories of the messengers he knows and stories he does not know.  But all messengers could not bring a sign unless it was by the permission of God.

The people of the past who were destroyed were mightier than you in strength and numbers.  Their power was of no avail.  When God’s scourge overcame them, they cried out that they now believe! But it was of no use to them.