Description: The verse of the Quran rightly points out the social fragility of the spider’s home that we have begun unraveling just recently.

"The example of those who take associates other than God is like that of the spider who takes (i.e.  constructs) a home.  And indeed, the weakest of homes is the home of the spider, if they only knew." (Quran 29:41) 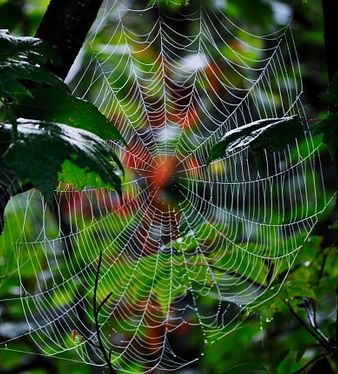 This verse of the Quran comes from chapter 29, the Spider.  The part of interest here is that God mentions that the weakest of all homes is that of a spider.  In the rich Arabic language, the word "Awhan" is translated into the (weakest); and a deeper look into the meaning suggests that it means severe weakness and helplessness both physically and mentally.

With the expansion of the study of nature and wildlife in the 20th and 21st centuries naturalists and scientists have unraveled, documented and videoed truly bizarre observations in the life of spiders.

Out of the over 45,000 known species of spiders, it is very common that male spiders are killed and eaten by their female spouses[1]; a term known as sexual cannibalism.   It is not known why this occurs, however, one theory suggested by scientists is that the male's body provides the female with much-needed nutrients that enables her to lay healthy eggs.  A study by Spain's Experimental Station of Arid Zone revealed that in most spider species, aggressive females kill their mates indiscriminately regardless if the male is considered inferior or not.[2]  In many species, female spiders even kill potential mates they are not interested to mate with.[3]

In some spider species, such as the dark fishing spider, the male spider automatically dies after mating due to internal reasons; and is then cruelly eaten by his bride.[4]  Other male spider species die automatically after mating only a few times and in the vast majority of species females outlive males; with males living for only a few months and females a few years.

When lucky enough to mate and survive the ordeal, the smaller sized male spiders, knowing their spouse's cannibalistic instinct, will then immediately make a run for their lives[5]  leaving the female to nurse anywhere from a few dozen to around a thousand eggs all by herself.  Such is the case with the Brazilian Wandering Spider.

In a further twist to spiders' lethal mating customs a study released by researchers Lenka Sentenska and Stano Pekar, from Masaryk University in the Czech Republic in 2013, found that in the Micaria Sociabilis species of black widow spiders both female and male spiders commonly kill and eat the other after mating; and that in this specific species, contrary to what was believed, male spiders more commonly kill and eat their spouses than females kill males.[6]

Life as a Spiderling

In the vast majority of species, the newly born spiderlings have only their mother to feed and protect them.  When food becomes scarce the mother is forced to feed her young unhatched eggs; hence a young spiderling must go through the trauma of eating their own unborn brothers and sisters to stay alive.[7]

When there are no more unhatched eggs to feed on and not enough insects falling into the web or caught by mother another common observation is that spiderlings, in desperation, turn cannibal on each other and the small overcrowded web turns into a confined cage of massacre.  Helpless as is she is, the mother spider also commonly engages in killing and eating her own young just to get through another day.

Description: Another example of social chaos in a spider web – matriphagy.   The living “hell” of a spider’s home is a reminder of the consequences of polytheism.

Yet the most bizarre part of a spider household is what happens when the female spider has reached unprecedented levels of desperation and anxiety and can no longer keep her young alive.  Having lost perhaps hundreds of her young and still stuck with several more hundred spiderlings; the mother, astonishingly, sacrifices her own body as food for her young by unleashing their killer instinct that makes them attack and eat her alive! This cruel process is known as matriphagy or "mother eating".[1] 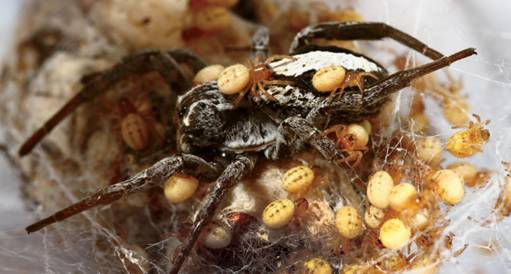 What is known, so far, is that matriphagy is a process initiated by the female spider and that its methods vary from one species to another.  Venomous spiderlings even poison their own mother to death; but in all cases matriphagy is a slow and painful process that takes weeks before the mother spider actually dies as her body fluids are eventually consumed by her own young.[2]

Such a process has been observed and documented in ground spiders, the Stegodyphus lineatus spider[3]  and crab spiders and only through further research can it be determined just how widespread matriphagy is in the miserable world of spiders.

In retrospect, mating in the world of spiders, most often leads to the death of the male spider and the widowing of the female; the mother is left all alone with, on average, a few hundred young to feed and protect from predators, is forced to feed unhatched eggs to her spiderlings to keep them alive, and commonly eats her young to keep herself alive.  Spiderlings also turn to cannibalism and kill and eat each other; and ultimately and most astonishingly, in dire situations mother spiders sacrifice themselves to their own young to be eaten.  The final result, at best, only a few of the hundreds of spiderlings actually survive to leave the torment of the web.

Now, knowing the cruel nature of a spider's household, Praise be to God Almighty, Who mentioned that the worst household is that of a spider, long before naturalists and scientists started to study spider behavior in detail.  It can now be stated, as a fact, that life in a spider web is totally bizarre and after comparison with households of other creatures, is truly the worst, most cruel and miserable of all households!!!

The Message in the Verse of the Quran

There is a clear warning in the concerned verse of the Quran.  God has compared those who take associates or gods, with Him in worship, to those who take a spider's web as a home.  The Quran and the authentic traditions of Prophet Muhammad, may the mercy and blessings of God be upon him, are both extremely clear that only God, The Creator of all, deserves to be worshiped, directly, not through any intermediaries or associates.  This is known as Monotheism.

"Worship God and associate nothing with Him" (Quran 4:36)

"And when Abraham said to his father and his people, ‘Indeed, I am disassociated from that what you worship (statues).  Except for He Who created me; and indeed, He will guide me.’" (Quran 43:26,27)

The message of Islam and of all the Prophets and Messengers is to worship God alone and that worshipping God through intermediaries or associates such as prophets, angels, pious people, animals, creatures, objects or anything is polytheism; the gravest of all sins.  All acts of worship, including supplication, prayers, and slaughter of animals should be directed only to God.

The Quran mentions that such associates cannot even respond to (and in some cases, not even see or hear) the prayers of the person who is supplicating to them.  Such is the case when someone wrongly goes to the grave of a Prophet, or a deceased pious person, or a statue and supplicates and asks them to forgive his/her sins or cure him/her from an illness.  The previous-mentioned have zero ability to do the required.  Furthermore, God mentions that He never ordered any of His creation to take associates with Him; in fact all of mankind was created with the pure instinct that God Almighty is One and that He Alone has the right to be worshipped.

The largest of all sins, polytheism, is to associate anything with God Almighty in worship.  This is one sin that God has stated that He will not forgive in the Hereafter; while all other sins can be forgiven.

Imagine the injustice of a person who was created by God (gently and mercifully in his mother’s womb) after once being nothing, who was gifted with a soul, was blessed with a brain, a heart, sight, hearing, feelings, a habitable, beautiful and scenic earth full of plants and animals to eat from, and raw materials which mankind has utilized to build cities and infrastructures; then this person does not give his praise, thanks and worship to God Almighty, instead gives so to a creation of God (that did nothing of the above-mentioned).  "And, when Luqman said to his son while he was advising him, ‘O my son, do not associate [anything] with God [in worship].  Indeed, association [with Him] is a great injustice.’" (Quran 31:13)

Those who die, not having repented from worshipping other than God, will lose in the Hereafter.  As for the human associates that used to be worshiped in this life they will dissociate themselves from the people who used to invoke them.  While, the non-human associates will turn against and betray the people who used to worship them; and will state (God will give them the ability to speak) that in reality no one was truly worshiping them.  As a result, both the invokers and non-human associates in worship will be placed in Hell.  "And [Abraham] said, ‘You have taken [for worship] idols instead of God, and the love between you is only in the life of this world.  Then on the Day of Resurrection you will deny one another and curse one another, and your refugee will be the Fire, and you will not have any helpers.’" (Quran 29:25)

Hence the spider web can be compared to Hell, a confined and miserable place of suffering.  The mother spider that gave her life, so that her young may live, can be compared to a person who used to worship many different associates (her many spiderlings) with God.  Since the non-human associates that used to be worshipped will also be in Hell and will betray the person who used to worship them, the result will be unbearable pain and suffering of that person, similar to how the spiderlings betray and turn on their own mother and are the cause of her torture and suffering in the web.  Only in the next life there will be no death; Hell and Heaven will be eternal.

[3] Zielinski, Sarah.  May 2015.  Animal moms sacrifice a lot – sometimes even themselves.  Science News.  Retrieved from https://www.sciencenews.org/blog/wild-things/animal-moms-sacrifice-lot-%E2%80%94-sometimes-even-themselves