Description: An explanation of one of the beautiful name of God, al-Salaam, which communicates to us the perfection of God and that He is the source of all peace and contentment. 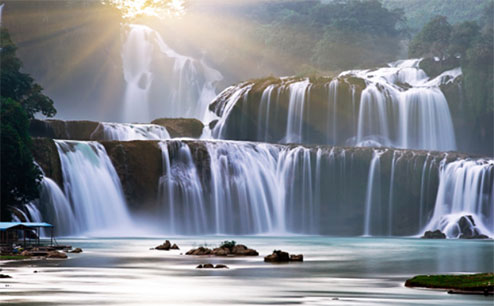 Allah is the bringer of peace who spreads peace throughout creation.  Since life was first created, it has been predominated by long stretches of peacefulness, security, tranquility, and contentment.  God is Peace and from Him emanates all peace.  It is as the Prophet, may the mercy and blessings of God be upon him, said: "O God! You are Peace and from You is peace.  Blessed be You, possessor of glory and honor."[1]

It is astonishing that some people who invoke God by this noble name live their lives in contention and hostility towards the world.  Every aspect of their lives is full of strife, from within themselves, to their outward behavior, in their thinking, and with their families.  How can such a person find peace with the Lord?

The name al-Salaam also connotes "soundness", the idea of being free from blemish.  It conveys the meaning that God is free from every shortcoming and deficiency, like fatigue, sleep, sickness, or death.  God’s existence is one of absolute perfection.  God says: "Allah (God), there is no God but He, the living and self-subsisting.  Neither slumber nor sleep overtake him." (Quran 2:255)

God is free from anything that would contradict with his absolute self-sufficiency.  Nothing can fatigue Him or elude Him.  Nothing is beyond his reach.

The People of the Scripture attribute such a deficiency to Him when they claim that He rested on the seventh day, after creating the heavens and the Earth.  This is why God says: "Indeed We created the heavens and Earth and everything between them in six days, and We were not touched by any fatigue." (Quran 50:38)

This same connotation of the name al-Salaam applies to God’s knowledge.  God is free from ignorance, doubt, and indecision.  Nothing is hidden from His knowledge.  His knowledge is not acquired through learning.  It is absolute, complete, and wholly accurate, comprehending everything in the past, present, and future without exception.

"It is the same (to Him) whether any of you conceals his speech or declares it openly; whether he lurks by night or walks forth freely by day." (Quran 13:10)

Likewise, His speech is free from all falsehood and injustice.  God says: "Perfected is the Word of your Lord in truth and justice." (Quran 6:115)

His pronouncements are true and His decrees are just.  His Law and every expression of His will are perfect.  God’s Law is full of wisdom and knowledge, as is the Quran which He revealed to His Prophet.  The Quran is rich in meaning, multilayered, guiding humanity in every way to what assures their welfare in this world and the next.  It is unfortunate that so many people who read the Quran are content to neglect this richness and blindly follow traditions and rote knowledge.  They have become incapable of creative thinking and renewal, and as a consequence wallow in the backwardness, ignorance, and cultural decline that we witness today.

God is free from having any contender, rival, or partner in His dominion.  He alone holds sovereignty over Creation, both in this world and the next.

His decree and His command are free from tyranny and injustice.  Prophet Muhammad relates to us that God says: "O my servants! I have forbidden Myself to act unjustly and have made it forbidden for you among yourselves, so do not oppress one another."[2]

From the perfection of God’s justice, He forbids Himself to ever act unjustly and makes it forbidden for us to oppress one another.  He says: "And your Lord is not in the least unjust to His servants." (Quran 41:46)

God commands us to cultivate this quality within ourselves and never act unjustly towards one another.  By acting justly, we are engaged in an act of devotion to our Lord, since God is not only just, but He loves justice and those who act justly.  In the same way, He is All-Knowing, and He loves knowledge and those who possess knowledge.  He is beautiful.  He loves beauty and those who cultivate beauty within themselves.  He is generous, and He loves generosity and charitable people.  These are all among the attributes of our Lord.

This connotation of soundness, this freedom from blemish, extends to His actions: to what He gives and to what He withholds.  When God keeps something from us, it is not due to stinginess or scarcity.  Glory be to God above that! It is from His infinite wisdom that He withholds what He withholds from his servants.  Some people are better off wealthy while others are better off poor.  "God enlarges the livelihood of whom He will, and straitens (it for whom He will); and they rejoice in the life of the world, whereas the life of the world is but brief comfort as compared with the Hereafter."  (Quran 13:26)  Likewise, some people benefit more by being healthy while others benefit more from experiencing illness.  God knows what each of us needs and what is ultimately in our best interests.

All of God’s attributes share in this perfection, this freedom from deficiency.  God’s attributes do not resemble to created things.  He is incomparable.  It is from God’s wisdom that we, as created beings, are subject to the limitations and shortcomings inherent to our nature and to the tribulations of living in the world.  God on the other hand is al-Salaam, the one who is free from all shortcomings.

God’s name al-Salaam is truly great in its meaning in that it articulates the perfection that all of God’s names possess – that each and every one of God’s attributes is free from shortcomings.

When we greet each other with peace by saying: "Al-Salaam `alaykum", we are invoking this name of God, and in doing so, we are communicating this connotation of God’s perfection as well as the idea of peace.

And indeed God has made "peace" the salutation of the believers: "Their salutation on the Day they meet Him will be ‘Peace!’" (Quran 33:44)

He has commanded us to use this salutation: "So when you enter houses, greet yourselves with a salutation from God." (Quran 24:61)  Therefore, a believer invokes peace upon himself and upon others with this salutation.

God is the Bestower of Peace

Indeed, God greets his creatures in this world with the salutation of peace.

God’s salutation upon His servants is His decree that they will be safeguarded in this world and the next.  Though they are subject to the trials and tribulations that others experience in the world, God bestows upon their hearts contentment and certainty of faith which transforms their difficulties into a boon and a rewarding experience.  Theirs are contented hearts, at peace with whatever God decrees for them.

The eminent Companion Saad ibn Abi Waqqas was blessed in that his prayers were always answered.  When he became blind, people would ask him: "Why don’t you beseech God to restore your sight?"

He would reply: "By God! My being content with God’s decree is dearer to me than what else I desire."

O God! You are Peace and from You is peace.  Blessed be You, possessor of glory and honor.

Al-Salaam alykum...thank you may Almighty reward u for tht