Description: This chapter comprises of 135 verses and discusses the story of Moses and Adam, exhorts Prophet Muhammad to patience and prayer, and reminds us of the consequences of disbelief. 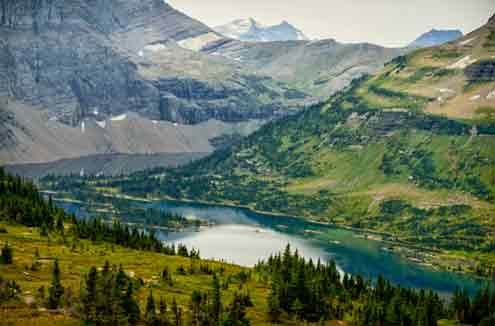 God informs Prophet Muhammad, may the mercy and blessings of God be upon him, that He did not send down the Quran to cause distress to him, but as a reminder for those who hold God in awe, a revelation from the One who created the earth and the heaven, the Lord of Mercy who is above the Throne.  Everything in the heavens and on earth and between them belongs to Him.  He knows what people keep hidden.

What follows next is the most vividly described story of Musa.  He is the prophet whom God has talked of the most in the Quran and narrated the events of his life from different angles so that his personality emerges in a different perspective every time.  Reference is made of the journey of Moses and his family from Madyan to Egypt.  When he goes towards the light he hears the voice of God calling him.  Moses holds a conversation with his Lord at the Holy valley.  God tells him to establish prayer for His remembrance, then gives him two miracles.  One, that his staff will turn into a serpent when he throws it on the ground; and second, that when he presses his right hand to his left side, it will come forth white and shining.  After this God tells him about the mission he has been chosen for: call Pharaoh to the path of God.  Moses prays to God for support and for his brother to assist him.  God accepts his prayers and grants him his wish and reminds him of the blessings that were bestowed on him since his birth, when the Pharaoh of that time was killing the sons of all the Israelites.  God further reminds Moses how He had made him go through the various twists and turns of his life before coming finally to this awesome moment when he was being chosen as a Prophet.

When Pharaoh saw the signs of God, he felt threatened and summoned his sorcerers for a duel.  Pharaoh’s sorcerers challenge to Moses, and finally recognize the truth of their Lord.  Then God commanded Moses to take the people of "Bani Israel" out of the slavery of Pharaoh.  But when Moses went to Mount Toor to receive the Torah, his people started worshipping the statue of a calf, being led astray by Samiri.  Moses banished him and burnt the idol.  The purpose of all these stories from the past is that we may learn from it.

Whoever turns away from the Quran will bear a terrible heavy burden on the Day of Resurrection.  When the trumpet is sounded and God gathers the sinful, they will murmur to one another that they stayed only ten days on earth, but the more perceptive of them will say that their stay on earth was only a single day.

On that Day God will blast the mountains into dust and leave a flat plain and people will follow the caller from whom there is no escape.  Every voice will be hushed for the Lord of Mercy.  Only whispers will be heard.  On the Day of Judgement, intercession will be useless except from those to whom the Lord grants permission and whose words He approves.  All faces will be humbled before the Living, Ever Watchful One.  Those burdened with evil deeds will despair, but whoever has done righteous deeds and believed need have no fear of injustice or deprivation.

God commanded the angels to bow down before Adam and they did, but Satan refused, so God told Adam that Satan is an enemy to him and his wife and to not let him drive them out of Paradise.  And as long as he stays in Paradise, he will not go hungry, feel naked, be thirsty, or suffer from the heat of the sun.

But Satan whispered to Adam, tempting to lead Adam to "the tree of immortality and an everlasting kingdom." Adam disobeyed his Lord; both he and Eve fell for Satan’s whispers and ate from the tree.  They became conscious of their nakedness and began to cover themselves with leaves.

Later his Lord brought him close, accepted his repentance, and guided him.  God expelled them from Paradise.  God told them that whoever follows His guidance when it comes, will not go astray nor fall into misery, but whoever turns away from it will have a life of great hardship.  God promises to raise the one who turns away as a blind person on the Day of Resurrection.   He will ask God why was He raised blind when he had sight before! God’s response will be that since he ignored God’s revelations when they came to him, it is only fitting that he is ignored on this Day.  This is how God rewards those who go too far and who do not believe in His revelations.  God says that the greatest and most enduring punishment is in the Hereafter.

Do they not draw a lesson from the many generations God destroyed before them, through whose dwelling places they now walk? There truly are signs in this for anyone with understanding! If it were not for a preordained Word from the Lord, they would already have been destroyed.  Their time has been set.

Verses 130-132 Directions to the Prophet

Prophet Muhammad is told to be patient with what they say, and celebrate the praise of his Lord before the rising and setting of the sun, during the night, and at the beginning and end of the day, so that he may find contentment.  He is instructed by God to not gaze longingly at what God has given some of them to enjoy in this present life.  God tests them through this, but the provision of the Lord in the life to come is better and more lasting.

Prophet Muhammad is told by God to order people to pray and to be steadfast in prayers himself.  God does not ask anyone to give Him provision, He provides for everyone, and the rewards of the Hereafter belong to the devout.

Verses 133-135 The stubbornness of the polytheists and its consequences

The disbelievers ask why does Prophet Muhammad not bring a sign from his Lord? God tells them that they were given clear proof in the earlier scriptures of the coming of Prophet Muhammad.  If God would have destroyed them through punishment before this Messenger came, they would have complained and asked if only God had sent them a messenger, they would have followed His revelations before they suffered humiliation and disgrace! Prophet Muhammad is told to say that we are all waiting, so you carry on waiting; ultimately you will come to learn who has followed the even path, and has been rightly guided.

THANK U FOR ALL THE INFORMATION ON HELPING ME CONVERT