Description: Revealed in Mecca, the chapter has 62 verses.  The title is taken from the invocation in the first verse, ‘By the star as it sets.’ This is the first chapter that the Prophet publicly recited in which both the believers and disbelievers prostrated at the end. 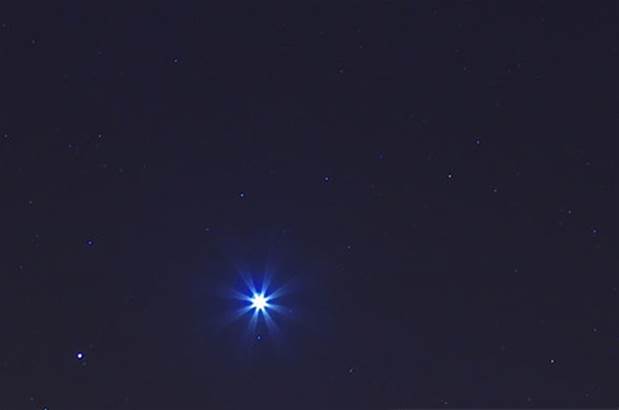 In the first verse, God has taken an oath of the stars to prove to the non-believers that Prophet Muhammad, may the mercy and blessings of God be upon him, was exactly on the right path.  The people of Mecca were witness to the fact that all throughout his life, Prophet Muhammad had never been involved in any indecent activity.  His honesty was a recognized fact; so why now, when he had brought to them the true religion of God, were they doubting him and spreading false propaganda against him?

The oath of the stars and their setting is also a proof, that just as stars have a fixed orbit and they never deviate from their path, similarly the Prophet was firmly following the revelation from God.  Therefore, just as people take guidance from the stars to find direction in the darkness of the land or sea, similarly we should follow the Prophet with complete confidence, and with the belief that He is the best person in the entire history of humanity, who practically demonstrated the pure and complete religion of God.

The disbelievers of Mecca were labelling the Quran as a mere fabrication, but God warns those who think along these lines.  Unlike common human beings, Prophet Muhammad was never influenced by his own desires to such an extent that He could have done or said anything which was against the truth.

God tells us that it was not a one-time incident that Prophet Muhammad saw Gabriel, and therefore the deniers of truth cannot make this excuse that maybe the Prophet was mistaken.  He saw Gabriel another time when he was taken to the journey of the heavens, which is commonly known as the incident of "Miraj" or the "Night Journey." God made him see many signs of His power, including Paradise and Hell, so that when He spread God’s message to people and warned them about the realities of life and death, he could speak from first-hand knowledge and experience.

Verses 19-31 Mere conjecture avails nothing against the truth

Lat, Uzza, and Manat were the deities of ancient Arabia.  Laat was located in Taif, Uzza near Mecca, and Manat near Madina.  According to popular belief, they were daughters of god, and hence, worshipped.

Making deities of stone and worshipping them, calling angels ‘daughters of God’ and hoping to enter Paradise on the basis of recommendations are all non-serious beliefs that are a product of a mind that does not fear God’s wrath.  There is no arguing with such people, as they pay no attention to reason.  The only possible way to deal with them is to shun them.

We must always stay away from major sins as well as indecent behavior, except what is called "lamam" which means small and momentary.  For example, you happen to look at something which you were not supposed to see.  Then in this case, you should immediately turn your gaze and ask forgiveness from God.  In other words, it could be stated as a slight lapse from your efforts of goodness.  We must try our utmost to reduce these lapses too, but we should remember that we cannot become perfect humans and hence we should always be positively hopeful of God’s forgiveness and never give up our struggle of becoming the best representatives of Islam.  Next God has reminded us that even if we become successful in this struggle, we should never think of ourselves as pure because after all, we are just humans and only God truly knows what our true worth is.

The polytheists of Mecca and the Jews in Madina stubbornly resisted the teachings of Prophet Muhammad and refused to accept him as a prophet of God.  On the other hand, they called themselves followers of Ibrahim and Musa respectively.  However, if they really knew what their prophets had taught them, then it should not have been difficult for them to recognize that Prophet Muhammad was also calling them to the same religion.  They warned them about accountability in the life after death.

Did they not know that they only get from this life what they strive for? If all their investments are for this world and they don’t put in any efforts for the life to come, how can they expect to be rewarded for things they did not do?

Every event in this world arises from supernatural causes and nobody but God is capable of causing them to occur.  Happiness, sorrow, life, death, the procreative system, riches, and poverty - all these are the feats of a superpower.  He is the one who gave us life and He is the one who will take it back, so what should be our objective if not to spend this life for Him? There is not much time left; we have to turn to God while we still can, otherwise the Day of Judgement is very close upon us.  This Day is drawing near and no one can save us from its torment except God.