Description: This chapter begins by introducing us to the power and strength of God.  It talks about giving freely and sincerely from the bounties that God provides us with and concludes by exhorting us to fear God and follow His messenger Muhammad. 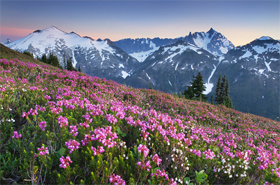 Chapter 57 of the Quran is entitled Iron.  It takes its name from the reference to iron in verse 25.  This chapter of 29 verses was revealed in Medina after the establishment of the Islamic nation.  It is an exhortation to the believers to give generously at this most critical stage in the history of Islam.  The chapter begins with six verses that read as if they were revealed in Mecca, that is, they are a glorification of and introduction to God and His all-encompassing power.   It goes on to encourage the believers into the correct behaviour, decries the fate of the hypocrites and mentions some of the previous prophets.  The chapter closes by referencing the behaviour of the People of the Book.

Everything that is in the heavens and the earth, the whole universe, glorifies God because He is the Almighty and the All-Wise.  He is the source of strength and the source of wisdom.  Everything in the universes belongs to Him, He controls both life and death and His power is responsible for everything, the big, the small and the microscopic.  He is the First and the Last.  He is the Ascendant, there is nothing above Him.  He is the Immanent, nothing is comparable to Him and He has knowledge of everything.

God created the heavens and the earth in six days and established Himself above the throne, in other words, there is nothing that is or can be above Him.  He knows about everything that enters the earth and everything that emerges from it.  He knows everything that comes down from the heavens and all that ascends.  He is aware of and is responsible for every seed that emerges from the soil and every molecule of vapour that ascends to the sky.  There is nothing too small to escape His Knowledge and Power.  He is aware of every action of every human being.  The universe belongs to Him and all affairs are His to control.  God causes the night to turn into the day and He knows the tinniest secret locked in your heart.

Believe in God and His messenger Muhammad, may the mercy and blessings of God be upon him.  Spend or use what God has given you temporarily for the benefit of others (charity or charitable works) and God will reward you abundantly.   God addresses the Muslims who had affirmed the Faith but were not fulfilling the demands of the Faith and conducting themselves as true believers, asking them, what is wrong with you, why don’t you truly believe in Me when the Messenger, Prophet Muhammad is inviting you to do so.  I (God) have already taken a covenant from you, you said you believed! Clear revelations (Quran) were sent to lead you from darkness into the light.  I (God) am Kind and Merciful towards you so what is wrong with you, why don’t you spend from what I have given you.

Spend in God’s name because all that is in the heavens and the earth belong to Him.  Spend, give graciously! Do not however think that everybody is the same.  Those who believed and were charitable towards God and with His bounty before the surrender of Mecca will achieve a higher rank then those who gave and fought afterwards.  Everybody however gets a great reward and God is well aware of all that you do and think.  Who is the one that will give God a loan? God will repay it manifold and add rewards to it.

Verses 12 – 19 Those discernible by the light

On the Day of Judgement the believers will be distinguishable by the light streaming ahead of them and on their right.  They will be given the good news that their eternal abode will be in gardens under which rivers flow.  The hypocrites will cry out, asking the believers to wait and share their light but they will be told to turn back and seek the light.  And a barrier with a gate will be put between them; inside will be mercy and outside will be the punishment of Hell.  The hypocrites will call out weren’t we with you believers, but the reality is they were not.  They allowed themselves to be tempted, and found excuses not to do the right thing until it was too late and Satan’s deception ruined and crushed their afterlife.  No ransom will be accepted, and their home is in the Fire.

It is time now to remember God and the revelation.  Do not be like those before you whose hearts became hard.  Remember that God restores the earth to life after it dies.  God has given you the revelation (Quran); it has been made clear, use your power of reasoning.  Those who practice charity will have their loan multiplied.  Those who believe in God and His messengers will have their reward and their light.  The disbelievers are in the Hellfire.

The life of this world is transient; it is a diversion, an amusement for a time.  You boast and show off your adornments but they will wither and die like a garden after it has bloomed.  It is the next life that should concern you.  It might be a terrible punishment or it might be forgiveness and approval from God.  Choose forgiveness and race towards it.  God bestows His bounty on whomever He wills.

No affliction happens either on earth or in your heart that was not set down in writing by God before He bought it into being.  So do not grieve for that which passes you by or be over joyful about what you gain.  God does not love those who boast or those who are stingy with their bounties and encourage others to be miserly.  If this does not bother you, then just know that God is free of all needs and worthy of all praise.

God has already sent messengers with clear evidences and scriptures, and the scales of justice so that you know how to conduct yourselves with fairness.  He sent the great bounty that is the metal iron.  It has many uses and gives you great strength.  It is military might for those that support God and His messengers.  God sent many prophets including Noah, Abraham and Jesus.  Jesus came with the Gospel and those who followed him had soft hearts and were full of mercy.  They invented monasticism to please God but they did not practice it correctly.  Those who believed were rewarded but many were openly defiant.

O Believers, fear God and follow His messenger Muhammad.  You will have a double share of His Mercy and have a light to walk in; He will also forgive your sins.   The People of the Book should know that they have no power whatsoever over the Grace of God.  He bestows His Grace on whomever He wills.  His Bounty is immense.