Description: A chapter dealing with faith focused on Prophet Muhammad being from a long line of prophets whose mission was to deliver the message of God.  It is God who will call the people to account. 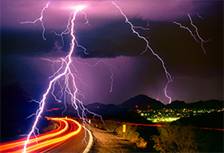 The majority of scholars agree that Chapter Thirteen was, apart from a few scattered verses, revealed in Mecca.  It takes its name from the thunder mentioned in verse thirteen.  It is a powerful and emotional chapter that appeals to the heart while making use of logic and reason.

This chapter opens with a combination of letters, Alif, Lam, Meem, and Ra.  God Alone knows the true meaning of this combination and why 29 chapters of Quran open in a similar way.  God reminds us that the Quran has been revealed to Prophet Muhammad, may the mercy and blessings of Allah be upon him.  It is the truth although most people do not believe it.   God created the heavens; they are above us without any visible means of support.  Then He established Himself above the heavens on His throne.  He created the universe for the benefit of humankind.

The sun and the moon float in their orbits, they are on a specific course for a specified amount of time.  The world around you is full of signs and the revelations are clear in order that you have no doubt concerning your meeting with God in the Hereafter.  God filled the universe with signs to ponder and reflect upon; there are rivers, mountains, fruit and plants, and the regular cycle of night and day.  The earth is filled with all sorts of vegetation, they are all watered with rain but some are of better quality.  These signs are obvious for those who think.

Verses 5 – 15 God knows the obvious and the unseen

Some people ask Prophet Muhammad astonishing questions about whether or not they will be resurrected.  They are destined for the Fire.  They challenge Prophet Muhammad to bring about the punishment he refers to rather than asking God for forgiveness.  God is full of forgiveness but also severe in punishment.  They stubbornly demand a miracle of their choice, but Prophet Muhammad is a warner, nothing more.

God knows everything about birth and wombs; He knows both the obvious and the hidden.  Speaking in whispers or being in the cover of darkness does not conceal anything from Him.  Each person has two guardian angels.  God will not change the condition of a people unless they change themselves.  If God intends to punish a people, then no one can prevent it.  The only real protection is from God Himself.

God shows His signs in the sky; lightening causing fear and hope, heavy clouds filled with rain and thunder that exalts Him yet can strike whomever God chooses.  The unbelievers dispute these signs.  Prayer to God is the only true prayer, praying to false deities will elicit no response.  Everything in the heavens and the earth prostrates to God, willingly or unwillingly.

Tell the unbelievers that God is the Lord of the heavens and the earth.  Ask them why they would worship something other than God.  Are the blind and the seeing equal? Is the darkness and the light equal? Do these false deities create? No! God creates.  He sends down rain and floods that carry foam like the foam that forms after melting metal.  This is an example of the difference between truth and falsehood.  The foam vanishes but what remains is useful.  Those who respond to God will have an excellent reward whereas those who do not will not be able to ransom their way out of the punishment that awaits.  Is someone who understands the truth of the revelations equal to someone who does not? Those with common sense will fulfil the agreements they make in God’s name and are afraid of the coming Reckoning.  They also pray, give in charity from what God has provided them with, and fend off evil with good.  They will enter Paradise with their families and the angels will welcome them to their wonderful home, but those who are cursed will find themselves in a terrible home.  This worldly life is brief compared to the life in the Hereafter.

Remembering God and His excellent promises makes a believer’s heart tranquil.  God provides a beautiful resting place for those who believe and do good deeds.  Prophet Muhammad was sent to his own community to recite what God had revealed.  Yet they still disbelieve.  Prophet Muhammad is told by God to respond to the unbelievers.  Tell them (he is told) that God is your Lord, there is none but Him and that you have put your trust in Him knowing that you will return to Him.

If there was ever to be a recitation that could move mountains, shatter the earth, or make the dead speak it would be this one.  God commands everything and He could have guided all of humankind if that had been His will.  The unbelievers will never be far from disaster, until the end when God’s promise will be fulfilled.   You, Muhammad are not the first messenger to be mocked.  Even though the unbelievers were granted a respite, they were taken to task with a terrible punishment.

They know God watches over every soul yet they insist on associating partners with Him.  Name them; could you tell God something He does not already know? Their fantasies are made to seem desirable and the path to Paradise for them is blocked.  God has let them go astray and there is no one who can guide them to the right path.  When the punishment arrives no one can defend them against God.

Those who remember God will have a reward that looks like this; flowing streams, everlasting fruit and shade.  But the unbelievers have nothing but the Fire.  Those who accepted Islam from among the People of the Book (Jews and Christians) rejoice at the new revelations (Quran) but some from among the People of the Book deny parts of it.  Prophet Muhammad must say, "I have been commanded to worship God and associate nothing with Him, I invite you to do the same, and to Him will I return".  Quran has been revealed in Arabic and if Prophet Muhammad was to follow the vain desires of some of his community after knowledge had been given to him nothing could protect him from the wrath of God.

Some of the messengers before Muhammad had wives and children but none had the power to perform miracles without God’s permission.  In every time period there was a book (or revelation) and God confirms or erases whatever He wills because He is the source.  Prophet Muhammad is told that he may not see in his lifetime the punishment that awaits them but that is of no consequence because his task is only to deliver the message.  It is God who will call them to account.  Do they not see that God shrinks the borders of what they control? God’s plan overcomes all plans.  If they say to Muhammad that he is not a messenger then he should reply that God is the only witness he needs.