Description: When the event nobody can postpone or deny comes upon you what group will you be in? 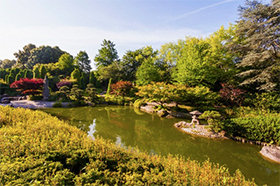 The 56th chapter of Quran was revealed in Mecca and has 96 verses.  Its name, The Coming Event is taken from the opening verse and is also the central theme of the chapter.  The event about which there is no doubt, the Day of Judgment, when the people will be divided into three distinct groups; those  who are particularly close to God, the believers and the unbelievers.

When the Day of Judgment arrives no one will be able to deny what is happening.  Some people will be raised high and others will be abased and pushed low.  The earth will shake and the mountains will crumble until they are nothing but dust scattered in the wind.  The people will be sorted into three distinct groups.  The first group are those who are closest to God, in proximity at the sorting, and in respect to their good deeds and lifestyle.  This group will be the first to enter Paradise.  Next will come the believers, those who followed the commandments of God and strove for righteousness.  Finally, the damned, those who will face an eternity in the Hellfire.

The group that is closest to God in Paradise will include many from earlier generations and some from later generations.  They will recline, facing each other on beautiful ornamental couches while they are waited on by youth that are eternally young.  The youth will offer them goblets, glasses and cups of a pure drink that will not cause headaches or intoxication.  They will be able to choose any sort of fruit they desire and the meat from any birds they choose.  As a reward for their good deeds there will be beautiful companions described as hidden pearls.  There will be no evil, vain or sinful talk among them; only the greetings of peace.

On the right are the believers, those who have been handed their book in the right hand, and are from both the later and former generations.  They will also be reclining on raised couches among thornless lote trees and acacias, with abundant fruit, shade trees, and flowing water.  Their companions will be a special creation, virginal, devoted and the same age as their partners.

On the left are those who have been handed their book in the left hand – they are very unfortunate.  They will dwell in the middle of black smoke with scorching winds and scalding water.  They overindulged in luxury, committed great sins and denied their own resurrection and of their ancestors.  Prophet Muhammad, may the mercy and blessings of God be upon him, is told to tell the deniers that they will indeed be resurrected at an appointed time and then they will eat an evil fruit and drink scalding water.  They will try to quench their thirst as if they were thirsty camels.  That is what they have to look forward to on the Day of Judgment.

Note: In the following verses God uses a literary style known in English as the "royal We".  He refers to Himself in the singular by the use of a plural pronoun.  This is to denote the majesty of God.  Thus the use of We is for respect and glorification not to denote a plurality of numbers.

God says, "It was We who created you!" Is that not enough, He is asking, for you to believe? No? Then consider the semen that you eject.  Did you create that yourselves, God asks, or did We create it? It is We who designed death and We could easily replace you with others just like yourselves or We could recreate you in a form unknown to you.  Why will you not reflect and take heed?  Consider the seeds that you plant and grow.  Did you cause them to grow or was it We who did that? If it was Our will, God says, We could turn your harvest into dust and you would be left whining and lamenting.  Consider also the water that you drink.  Did you cause the clouds to form and the rain to fall? We could have made it bitter or salty.  Think! Be grateful! Consider the fire that you kindle.  Did you grow the trees that produce wood to feed the fire, or was it We? It is a great reminder for all people and of particular benefit for those who travel.  So exalt and glorify the name of God, the Most Great.

God swears a mighty oath by the position of the stars, that the Quran is truly noble and well protected in al-Lawh al-Mahfooz .  The Quran here is only touched the angels.  God asks, would you scorn and deny a scripture in return for all that God provides for you!? When a person is dying and his soul rises into his throat, our angels are closer to him but you do not see them.  If you deny that you will not be resurrected why don’t you restore the dying one’s soul? If what you say is true, why not do this.  You cannot prevent death or escape the recompense.

If the dying person is one of those who will be close to God he will find comfort, ease, bounty and bliss.  If he is one who will receive his book in the right hand he will be greeted with peace by the others of the right hand.  But if he is one of those who denied the truth, he will be welcomed with nothing but scalding water and the fires of Hell.  This is the absolute truth, a certainty, so glorify and exalt the name of God who is the Greatest.

You remind me of that dae dat i cnt hope 4 ntin bt 2 enter paradise by d grace of GOD..jazakumullahkhayran.