Description: Our belief that God is King increases our desire to turn to Him & seek the bounty of the true Owner of all things.

God is referred to as "King" five times in the Quran.

"Lo! the righteous will dwell among gardens and rivers, in the seat of honor with a Mighty King." (Quran 54:54-55) 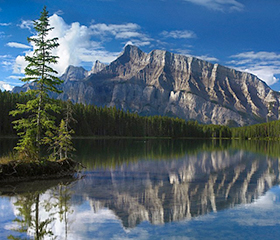 In Arabic, the word for "owner" (mālik) is closely related to the word "king" (malik), the only difference being that "owner" is pronounced with an added stress on the letter a.  God is referred to by this related name "Owner" in other verses, including:

(Indeed, in some modes of reciting the Qur’an, the word is pronounced with an unstressed a so the verse reads: "King of Judgment Day.")

God is "the owner of sovereignty".  Indeed, he is the King of Kings, since the lives and destinies of all earthly kings are in His hands.  It is as God says: "Blessed is He for whom sovereignty is in His hand." (Quran 67:1)  And thus He is the "True King" who has "sovereignty of the heavens and the Earth".

God’s sovereignty is absolute.  It has no limit.  "Human beings can be described as possessing "sovereignty", but theirs is transient and it is limited in scope.  We say that someone is king of a particular country.  We likewise say that someone is the owner of a field or a vehicle.  These types of sovereignty and ownership are limited in their timeframe – the duration of a person’s lifetime at most, often less – as well as in the scope of what is being possessed or being ruled.

All over the world, we can see artifacts and monuments left behind by past civilizations: mighty castles, great estates, the ruins of Egypt, Greece and Rome.  They attest to those who once possessed great power but then passed on into the annals of history.  They held sway for a period of time over a part of the globe.  Then God decreed that their rule would come to an end.  Thus it becomes clear to us that true sovereignty belongs to God alone, whereas human sovereignty is fleeting and capricious, restricted and incomplete.

Ahmad Zaky has written a series of moving articles entitled Civilizations which Have Come and Gone.  How true this title is.

Who has ever possessed the entire world? People talk about people like Pharaoh, Nimrod, and Alexander the Great, but none of them were able to take possession of the whole world, or bring all of humanity under their sway.  All who rule do so over a limited domain for a limited time.  God has made it the norm throughout the ages that nations, kings, and powers would contended with one another.  He says: "And if not God did not check one set of people by means of another, the Earth would indeed be full of mischief: But God is full of bounty to all the worlds." (Quran 2:251)

No human being has ever possessed the whole of the Earth or has been able to govern all of its affairs.  Consider, then, how small a part the Earth is of God’s vast universe.

God, indeed, is the True King in every way.  He gives to His servants when they beseech Him, and Prophet Muhammad, may the mercy and blessings of God be upon him, informs us that in Paradise, God will bestow "what no eye has yet seen, no ear ever heard, and no mind ever imagined."[1]

Moreover, God says: "And no soul knows what delights of the eye have been kept hidden in store from them as a reward for what they used to do." (Quran 32:17)

The people with the least reward in Paradise will abide for eternity in palatial splendor, dwelling in beauty and delight beyond all imagining.  "The lowliest denizen of Paradise will have what is equal to all the world and ten times more."[2]

Prophet Muhammad said: "The denizens of Paradise look up at the denizens of the levels above them the way they would look upon a twinkling planet moving from East to West across the sky.  This is the disparity between them."

When the people heard this, they asked: "Messenger of God, are those higher levels the levels of the Prophets, not to be attained by anyone else?"

He replied: "Indeed not.  I swear by Him in whose hand is my soul, they are just people who believed in God and believed the Messengers."[3]

These are but some of God’s bounties that He shall bestow upon some of His worshipers.  How far more glorious, then, must Firdaws be, the highest domain of Paradise, directly below the Throne of the Beneficent.

God gives and bestows without measure, and the bounty He gives to His servants does not decrease what He possesses in the least.  The Prophet, may the mercy and blessings of God be upon him, relates to us that God says:

O My servants! If the first of you and the last of you, human of you and jinn of you, were as the most God-fearing heart of any single man among you, this would not increase My dominion in the least.

O My servants! If the first of you and the last of you, human of you and jinn of you, were as the most sinful heart of any single man among you, this would not decrease My dominion in the least.

O My servants! If the first of you and the last of you, human of you and jinn of you, were to stand as one and ask of Me and I were to give each person what he asked for, it would not diminish what I have, any more than the ocean would be diminished if a needle were dipped into it.[4]

Consider the choice of word "snatch" here.  This is because when a human being possesses something of value, he or she is very reluctant to part with it.  It is not parted with peacefully.

We as human beings may comb the Earth for our sustenance.  We may work with might and main to our utmost strength, producing, stretching our creativity and our intellects to the limit.  Nevertheless, we will forever be the subjects of our Lord, the possessions of the one who created us.  We should know that this servitude to our Creator is the greatest station of liberty there is, for the servant of God acts from free conviction and free desire.

Our belief that God is King benefits us.  It increases our desire to turn to God and seek from His bounty.  We increase our supplications to the one whom we know is the true Owner of all things.  This belief also frees us from the thrall of what we see other people possessing.  We do not debase ourselves before those people or compromise our human dignity in hopes of their favor.  Instead, we apply our own energies and God-given talents to aspire to be the best we can be, placing our reliance and trust in God alone.

I love allah! Allah is the best! There is no god besides allah