Description: God’s existence is certainly manifest to our minds, but He is the Hidden when it comes to the true nature of His essence and attributes. 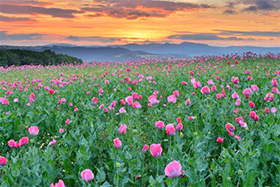 God says: "He is the First and the Last, the Manifest and the Hidden, and He is the Knower of all things." (Quran 57:3)

Prophet Muhammad, may the mercy and blessings of God be upon him, said, addressing God in supplication:

God is the Manifest

God is the Manifest who is transcendent above all things. He is such in His essence and attributes, as well as in His power, might, and authority.

God declares Himself to be above the Throne in seven places in the Quran. For instance, He says: "The Beneficent is established on the Throne." (Quran 20:5)

And: "Indeed, Your Lord is Allah (God) Who created the heavens and the Earth in six Days, then established Himself above the Throne." (Quran 7:54)

And says: "They all revere their Lord, high above them, and they do all that they are commanded." (Quran 16:50)

The angels fear their Lord who is above them. Likewise, we are instructed to say while prostrating in prayer: "Glory be to God, the Most High." Therefore, when we are in the most humble state of worship, with our foreheads to the ground, we exalt God and glorify His transcendence above all deficiency and imperfection.

Another meaning of "the Manifest" is that God’s existence is manifest to the human mind with clear proofs and arguments. The signs of God’s Lordship are evident in creation.

Yet another meaning of "the Manifest" is that God supports His righteous servants with His might and His assistance, and establishes the truth, no matter how much those who are opposed to it strive in enmity. God says: "We strengthened those who believed against their enemies, and they became the ones who prevailed." (Quran 61:14)

And He says: "He it is who sent His Messenger with guidance and the religion of truth, that He might cause it to prevail over all religions." (Quran 9:33)

God’s religion is manifest. Its truth is evident, supported by sound arguments and proofs. It is also manifest by way of God’s will and decree, in accordance with His wisdom.

God says: "Most surely We help Our Messengers and those who believe, in this world’s life and on the day when the witnesses shall stand." (Quran 40:51)

God’s support comes in many ways. It also comes when God wills it to come. People should not expect instant success for their efforts. They should not grow impatient and hasty. God’s support, as well as everything else that unfolds in our worldly experience, has its norms and patterns, though this support can come in ways that are subtle or utterly unexpected.

At the same time we should know that God never breaks His promise, so when God says: "Most surely We help Our Messengers and those who believe, in this world’s life…" we know it to be true. A believer can be strong and manifest in the world without necessarily being in a position of prominence.

The crisis that many countries of the Muslim world suffer from today is primarily on account of internal problems. The external threats to Muslim countries are but echoes of more fundamental internal weaknesses. Yet, in spite of all the problems that Muslims around the world are facing, Islam is spreading. People are embracing it every day. We can see the statistics of the number of people who are embracing Islam and read the accounts of new converts. They are not accepting Islam for any worldly gain, but because they recognize it to be the truth.

Certain interest groups in the media make a lot out of the few individuals who leave Islam, though there are often clear worldly incentives that could account for their doing so, like status, fame, wealth, citizenship, or a political career. At the same time, there are thousands of academics, scientists, and open-minded people who freely accept Islam without any worldly incentive. They often have to overcome great obstacles in order to openly profess their faith: that they believe in the Lord of the Worlds, the Lord of Moses, Aaron, Abraham, Jesus, Muhammad, and all the other Messengers of God.

God is the Hidden

God is the Hidden who cannot be perceived by our physical senses. God says: "No vision can grasp Him, but His grasp is over all vision: He is the Knower of Subtleties, the All-Aware." (Quran 6:103)

God cannot be grasped by our imaginations. No matter how impressive we might believe our imaginative powers to be, we cannot imagine God. Whatever image we might concoct in our minds will be nothing at all like God. Understanding this will free a lot of sincere people from their misgivings, worries, misapprehensions, and doubts which put them ill at ease.

A believer should know that whatever suspicions or images their minds might present to them, they cannot possibly be God. God cannot be grasped by the imagination nor fully comprehended by the mind. We cannot hope to grasp an image of Him. Any image some of us might have in our minds are the false products of our thoughts. They have no value, no matter how beautiful or dreadful they might be.

God’s existence is certainly manifest. This is something our minds can readily grasp and the dictates of reason compel us to accept. Yet, at the same time He is the Hidden when it comes to the true nature of His essence and attributes. He cannot be seen by our eyes, and He is not subject to the laws that govern our material existence and by which we understand our world.

Among the meanings that we understand from this name is that God knows all things, no matter how hidden, how subtle, or how obscure they might be. Though God is exalted above the Throne, beyond the heavens, He is at the same time ever near to His servants.

God says: "Verily, we created the human being and We know what his soul whispers to him, and We are nearer to him than his jugular vein." (Quran 50:16)

And He says: "And if you speak aloud, then lo! He knows the secret (thought) and that which is yet more hidden." (Quran 20:7)

Though He is the Most High, He comprehends all of His creation. He is near to everything, intimately aware of all that transpires. Consider how God mentions these two meanings together in the following verses:

First, He says: "We have not revealed the Quran to you (O Muhammad) to distress you, but as a reminder to those who fear (God), a revelation from Him who created the Earth and the high heavens. The Beneficent is established on the Throne." (Quran 20:2-5)

Then, immediately after mentioning His transcendence and loftiness, He says: "And if you speak aloud, then lo! He knows the secret (thought) and that which is yet more hidden. Allah (God)! There is no deity but He! To Him belong the most beautiful names." (Quran 20:7-8)

This name of God also has significance in how God relates to the visible world. Everything that we see is God’s direct possession and under His power. Wherever we turn our faces, we gaze upon His dominion.

It enriches our faith to contemplate on these names. We feel nearer to Him, closer to Him, and less attached to created, material things. We realize that our knowledge, our abilities, our intellects, and our perceptions have limits. Even when we apply our minds to understand certain phenomena in the created world, we sometimes come away from that attempt confused and frustrated. When it comes to God, our minds can quickly come to sure knowledge that He exists, because of the signs of His existence that He has placed in creation. We can believe in Him with absolute certainty. Yet those same minds can never hope to comprehend His essence or define Him precisely.

God has revealed to us through His Book and through what He has revealed to His Messenger what inspires us to worship, praise, glorify, and thank Him. God has taught us many of His names and attributes by which we can draw ever nearer to Him, without ever falling into the error of likening Him to created things, or falling victim to the caprice of our imaginations.