Description: A brief commentary of Chapter 7 (verses 59 to 147) of the Holy Quran.  In this part we learn important lessons from the lives of the prophets and long gone civilisations. 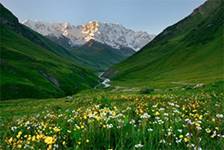 God sent Noah to his people and he asked them to worship God alone.  They denied Noah so God saved him and those with him in a ship, the others, who denied God’s signs, were drowned.  Prophet Hud was sent to the people of Aad, saying worship God alone but they denied him.  They called him a liar and a fool when he was giving them sincere advice.  Hud reminded them of the people of Noah and of the favours God has bestowed upon them, he warned them of a terrible punishment but they taunted him and asked Hud to bring on the punishment.  Hud said he would wait with them for the decision from God.  The disbelievers were annihilated; Hud and his companions were saved by the mercy of God.

Verses 74- 94 The stories of Saleh, Lot and Shuaib

Then, to the people of Thamud, God sent Prophet Saleh.  He asked them to worship God alone.  Saleh asked them to protect the she-camel sent from God and reminded them that they were the inheritors of Aad, capable of building great mansions in valleys and carving out homes from the sides of mountains.  Remember God’s blessings Saleh told his people, however the arrogant ones asked the believers if they really thought Saleh was sent from God.  They answered yes but the arrogant ones rejected this and hamstrung the camel they had been charged with protecting.  So bring us this promise (of God’s wrath) they said, so an earthquake seized them and they fell down dead.  Saleh turned away.

Lot was sent to his people and confronted them with the promise of punishment for the indecent acts they performed with each other, but their only response was to try to evict Lot and his family from their city.  God saved Lot and all his family, except for his wife who was among the evildoers, when the rain of stones destroyed them.

Shuaib was sent to the people of Midian and he asked them to worship God alone.  He asked them to cease their corrupt business practices and to stop waylaying visitors and wayfarers in their cities.  He reminded them that God increased their numbers and of the shocking ends to some previous nations but they did not want to heed the warning.  Instead of being grateful to God they attributed changing fortunes to the passage of time.  The people of Midian were stuck down by an earthquake, those who had disbelieved Shuaib’s warning ceased to exist.  Shuaib turned away without grieving for the disbelieving people.

Whenever God sent a prophet to a town (or nation) he afflicted the people with adversity and misfortune in order that they might humble themselves before Him.  Then God changed their hardship to prosperity but the people did not recognise God’s grace.  Had they believed they would have been showered with riches but they did not so they were seized for their misdeeds.   God asks, did those people feel secure at night, or in the day? The only people who feel secure from the plan of God are those doomed to destruction.  Do people not understand, from the stories of those before them, that God can afflict them for their sins and seal their hearts?

The people in the cities in the previous verses were sent messengers with warnings but they refused to believe in them.  Then God sent Moses to Pharaoh and his priests but they too treated the message unjustly.  See then what happened to those who spread corruption.  Moses told Pharaoh that he (Moses) was a messenger from the Lord of all the worlds and Pharaoh asked for a sign.  Moses threw his staff to the ground and it tuned into a slithering serpent.  Then he pulled his hand out from under his robe and it was shining white and radiant.  The leaders around Pharaoh said that Moses was a sorcerer and suggested a competition.  Pharaoh’s sorcerers arrived and were promised a place in the inner circle if they won.

The sorcerers threw their sticks and they turned into snakes.  God inspired Moses and he threw down his staff that turned into a snake that devoured all the snakes the sorcerers had conjured.  The sorcerers were defeated; the truth was clear so they fell to their knees saying that they believe in the Lord of the worlds, the Lord of Moses.  Pharaoh declared that he would cut off their hands and feet on opposite sides and crucify them all because they believed before he (Pharaoh) had given his permission for them to do so.  They cried out to God asking Him to keep them steadfast and let them die devoted to Him alone.

The leaders amongst Pharaoh’s people asked if he intended to let Moses and his people cause corruption in the land.  He answered that he would put their sons to death and spare their daughters.  Moses advised his people to be steadfast and turn to God for help.  Moses’ people complained that they were used to persecution before and are still being persecuted, but Moses gives them hope.

Pharaoh’s people were afflicted with several years of famine in the hope that they would come to their senses but they thought good provision their right and bad circumstances were due to Moses (an evil omen).  Their fortune however was in the hands of God but still they did not recognise it.

Next the people of Pharaoh were inflicted with a flood, followed by plagues of locusts, and lice, and frogs, and blood.  Pharaoh’s people asked Moses to intervene with his Lord and have Him remove the punishment, saying that if he did so they would let the enslaved people of Israel go.  However when the punishment was removed they broke their promise.  God drowned them and caused those who had been oppressed to inherit the land.

God took the Children of Israel across the sea where they came across people who worshipped idols.  The children of Israel asked Moses to make them an idol to which he replied that they were an ignorant people.  He told them the cult the idol worshippers were following was doomed to destruction.  God summoned Moses on the mountain for forty nights.  He asked his brother Aaron, who had been with him from the beginning, to take his place to lead the people and being careful to keep them away from the idol worshippers.  Moses arrived at the appointed time and asked God to show Himself.  God answered, you will not see Me, but look at the mountain, if it can look at me and remain in place you will see me.  The mountain crumbled before Moses’ eyes and he fell down unconscious.  When he recovered he said to God, ‘Glory be to You! To You I turn in repentance! I am the first to believe!’

God told Moses that he was chosen, from amongst all of humankind, to be the one who could hear God and receive His message, thus he should be grateful for such an honour.   God inscribed all details and instructions on the tablets, saying hold firmly to them.  Those who deny the signs of God will be kept distracted.  The deeds of those who deny the signs and the meeting in the Hereafter will become worthless.