Description: These verses explain what kind of God He is, what are His attributes, Who has sent the Quran, and before Whom you have to render an account of your deeds in the end.

"If We had sent down this Quran upon a mountain, you would have seen it humble itself and shatter out of fear of God.  Such are the parables which We put forward to mankind that they may reflect. He is Allah, there is no deity but He.  He is the Knower of the unseen and the seen.  He is ar-Rahman (Most Compassionate), ar-Raheem (Most Merciful).  He is Allah besides Whom there is no deity.  He is al-Malik (Sovereign), al-Quddus (Most Pure), as-Salaam (Giver of peace), al-Mumin (Giver of security), al-Muhaiman (Vigilant), al-Aziz (Migthy), al-Jabbar (Overpowering), al-Mutakabbir (Glorious).  He is pure from whatever they ascribe to Him.  He is Allah, al-Khaliq (Creator), al-Bari (Perfect Maker), al-Musawwir (Fashioner); to Him belong the most beautiful names.  Whatever is in the heavens and the earth glorifies Him.  He is al-Aziz (Mighty), al-Hakeem (Wise)." (Quran 59:21-24) 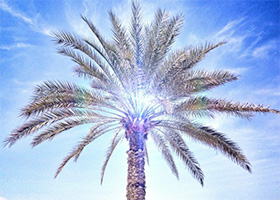 God describes the power of the Quran with the illustration of a mountain.  The mountain is high and massive; climbing it is a test of the human spirit.  God has described it in some verses as pegs of earth.  What would have been the response of this mountain to the Quran? The Quran has such power that if the mountains had hearts and could display their reactions, then we would have witnessed them turn into rubble out of their humbleness to God.  Similarly the true believers of Allah are those who absorb the truth of the Quran in their hearts so much, that all negative feelings, like arrogance and self love, are broken down and the only thing which remains is the love and fear of God.  The Quran transforms them into humble and polite people who are conscious of their accountability.  It is as if the mountain says, "Yes, I am a mighty mountain, but God is greater than I, God is the one who created me.  My message to you is to humble yourself in front of God’s Book.  That’s how amazing the Book of God is."  These examples are given to make us think.

·       They are fundamental building blocks of faith (imaan).

·       Every exhortation, command and prohibition, and story in the Quran is tied to His names and attributes.

o      One of utmost greatness and grandeur.

o     Allah knows the past, present, and future.

o     He also knows that which will not happen.  Were it to happen, He knows how it would happen and what would happen if it happened.

·       Ar-Rahman and Ar-Raheem come from the same Arabic root, rahima, which means to show mercy, to be compassionate.  Both names emphasize divine mercy that surrounds everything.

·       Difference between ar-Rahman and ar-Raheem:

o    People cannot be named ar-Rahman or Rahman, whereas people can be named Raheem.

o    Since God is Ar-Rahman, even the disbelievers are given food, water, and life despite their rejection of God and His prophets.

o    He is not Raheem to everyone, but to the believers only.

·       A king is an authority or a sovereign over a land and a people.  He is the one who owns everything in that he is the one who tells people what they can do and they cannot do.  So when we say Allah is "The King", it means that God is the one, true King over all of creation.  God owns everything in the heavens and the earth and only God has the absolute right to tell the creation what they can and cannot do.

·       This word comes from a root word that means "far".  So in essence it gives the meaning that God is far away from weakness or imperfection.  It means that God is far exalted that He should have a fault or defect or demerit: He is the purest, no evil can be imagined about Him.  All of the creation has some flaw or weakness.

·       Every created being has limitations, the eye can see so far, the mind can grasp so much, the muscles can lift so much weight; God is not limited by human boundaries and weaknesses.

o     He from whose oppression the creations can feel secure.

o     God is the source of all peace.  All of the peace in the heavens and the earth comes from God.  Allah is the One who brings peace and security to all of the chaos and disorder in the universe.

·       As Salaam Alaikum, the Muslim greeting, means may no harm come from me to you, may peace always be around you, and you shall not see evil from me.

·       Paradise is called Dar us-Salaam (The Abode of Peace) because when you enter Paradise, no harm shall come to you after that.