Description: Islam is a God-centered religion. Nothing illustrates this reality better than the verse named ‘The Greatest’ by the Prophet Muhammad. Read this article to find out more about this verse and its beautiful explanation of who is God.

"Who is there that can intercede with Him, except by His permission?" 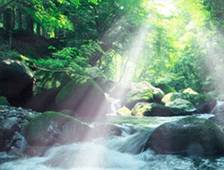 No one can intercede and be an advocate on behalf of someone without God’s permission and pleasure.  Allah has perfect control of everything.  Intercession is by God’s grace and mercy and reserved on the Day of Judgment only for those whom God allows to intercede, such as the prophets and righteous. As for those who worship false gods, they will have no right of intercession on that Day.

In contrast with the Islamic principle that salvation depends primarily on one's own faith and deeds, and intercession will only be allowed in favor of the deserving, who fell just short of the target but were right on the track, the two preceding great religions, Christianity and Judaism, have both relied heavily on unlimited and unrestricted intercession for salvation.

The denial of love and intercession in the Hereafter concerns the unbelievers. The sentiments of love between the believers will survive. Accordingly, they will intercede for each other with Allah's leave. "They cannot intercede except for him with whom He is pleased with." (Quran 21:28)

The Prophet, may the mercy and blessings of God be upon him, said:

"The people will come to me and I will proceed to seek my Lord’s permission. I will be granted leave. When I see Him, I will fall prostrate. He will allow me to remain in that state so long as He will. Then it will be said: 'Muhammad, raise your head and ask, you will be heard! Intercede and your intercession will be granted.' Then I will praise my Lord with words that He will reveal to me then. Thereafter I shall begin to intercede; but a limit will be set (about what kind of people it is for whom I could intercede). Consequently, I shall take them out of the Fire and usher them into Paradise".

God's knowledge is absolute, and is not conditioned by space or time.

God is aware of all our deeds and actions and controls what every soul earns. He has perfect watch over everything. To Him belongs whatever is in the heavens and the earth indicates that all creatures come under divine sovereignty.

Fate and destiny are in God’s control and He knows what happens to His creatures in this world, and what will happen to them in the Hereafter. God has perfect knowledge of all creation and its past, present and future.

"whereas they cannot attain to anything of His knowledge save as He wills."

All knowledge is from God and we can never learn anything except that which He wills.

God has blessed human beings with the gift of knowledge, but no matter how much human knowledge progresses, it will remain a drop in an ocean compared to divine knowledge. Human beings fall short of fully knowing themselves, how can they imagine to grasp the knowledge of the world of the Unseen? None of the creation knows anything of the Unseen, except for prophets who were given some knowledge of it.

"His Kursi extends over the heavens and the earth,"

Like divine knowledge encompasses all creation, the Kursi – the footstool of God – encompasses the whole universe. That’s is the greatness of God.

The Kursi is nothing in comparison to the Throne, except like an iron ring tossed into a spacious plain of earth (Ibn Hibban). So if the Kursi is like this, then what about the Throne of God, Most Glorified and Exalted!

Therefore, all of the creation in relationship to God is very small and nothing in comparison to Him. If only one thing from God’s creation, the Kursi, is bigger than the heavens and the earth, but still smaller than the Throne, then God, the Mighty and Majestic, is greater than everything.

"and the preservation of both does not tire Him."

Nothing weakens Him.  Much or little, easy or difficult, more or less, great or humble – Allah preserves all and it does not tire Him in the least.

He feels no weariness in guarding and preserving the heavens and the earth and this indicates that God cannot be compared to anything mortal. It does not burden or cause Him fatigue to protect the heavens and earth and all that is in between them. Rather, this is an easy matter for Him.

The phrase, "the preservation of both does not tire Him," is an expression of God’s omnipotence, depicting in simple but powerful terms how easy it is for God to sustain and preserve the heavens and the earth.

"He is the Most High, the Most Great."

He is at the peak of height and peak of greatness beyond human imagination as befits His Majesty.

God is the Most High; nothing is above Him, and nothing resembles Him. God is the Possessor of majesty and holiness, perfection and glory, beauty and grandeur. Nothing is greater than Him for God is the Supreme, the Great.

No matter how powerful or great a human being may grow, he can never rise above being a servant of God. Once this fact is firmly established in man’s mind, it will enhance his status as subordinate to God and restrain his pride and transgression. He will truly fear God and appreciate His majesty and power, and will seek to be more humble towards God and less haughty in dealing with his fellow human beings.

As salaam alaikum Very good post thanks for sharing.