Our Small Place in God’s Creation

Description: The awe-inspiring creation of God humbles us and compels us to recognize Him and Praise Him. 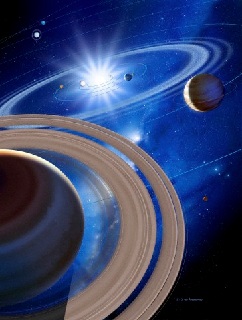 People sometimes fancy themselves as being all-important, looking disdainfully from side to side, holding their noses high in the air.  But if they would only regard these great and awe-inspiring creations around them, it would give them a sense of humility and they would become humble before their Lord.

1.    At the time of conception, between five and six hundred million sperm cells pass through the vaginal tract, each of them capable of fertilizing the egg and becoming a human being.  But God in His wisdom selects one from all of those millions to fertilize the egg, and this one will develop into the fully-formed human being God chooses to create, a being that by God’s grace possesses the capacity to reason and to dispose of its affairs.

This is how we were all created, so we should feel humility in recognition of the greatness and grandeur of our Lord.  We should remember our humble beginnings so we can appreciate the vast difference between that little drop of mixed fluid from which we were conceived and the fully formed human beings we are today.  This should compel us to glorify God, remain aware of Him at all times, and thank Him.

2.    There are over one hundred trillion cells in the human body.  Inside each of these cells are organelles, systems, complex processes, and vast stores of information.  Each and every detail of the cell glorifies its Lord while carrying out its role in the cell in an exemplary manner.

The nucleus of each cell contains roughly 31 billion nucleotides – the four molecular "letters" on the DNA molecule that spell out the genetic traits of the living organism and regulate its functioning.  It is this information that an organism inherits from its father and mother.

This vast number of molecular "letters" that make up our DNA are duplicated in every one of the hundred trillion cells of our bodies.  Each one of these letters attests to the greatness of God who created them.

3.    When we look up at the night sky, we stare off into the vastness of space and the billions of galaxies that are over our heads.  Each galaxy is in turn a conglomeration of billions of stars, and these stars are all at various stages in their life-cycles.  Some are in the process of being formed.  Some are young, others mature, while others are in the throes of death.  Each of these stars glorifies God in space the vastness of which boggles the mind.  God alone knows the full extent of the universe.  If we imagine a space ship capable of travelling at the speed of light, 186 thousand miles per second, it would take thousands of years for that spaceship to cross a single galaxy, let alone what is beyond it.

A given galaxy might contain from 100 million to a billion stars, and every day scientists are discovering something new about outer space.  The means of observation presently available to science are still quite limited.  We, as created beings, should see the greatness of God in His creation and view ourselves with humility.

The natural world is an open book that extols the praises of God.

"The seven heavens and the Earth and all that is therein praise Him, and there is not a thing but hymns His praise; but you do not understand their praise." (Quran 17:44)

"Do you not see that all things that are in the heavens and on Earth bow down in worship to God – the Sun, the Moon, the stars; the hills, the trees, the animals, and a great number of human beings? But a great number are (also) such as are fit for punishment.  And those whom God shall disgrace none can raise to honor, for God carries out all that He wills." (Quran 22:18)

All the beauty and splendor of the universe that we can see is but a small glimpse of the Creator’s ingenuity.

When a believer reflects on God’s creation, it reveals something of the greatness of God and His immense wisdom.  It brings peace to the believing heart and fortifies a believer’s faith.