Description: An analysis of the famous biblical verse “For God so loved the world that He gave His only begotten Son, that whoever believes in Him should not perish but have everlasting life.”  Part 2: Statements of Bible scholars on the authenticity and preservation of the Bible. 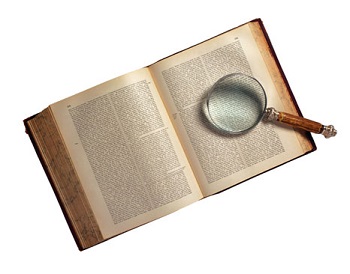 In this article we continue our examination of Biblical inaccuracy, taking as an example the famous verse, John 3:16: "For God so loved the world that He gave His only begotten Son, that whoever believes in Him should not perish but have everlasting life."

Something that troubles many readers is why Bible translators use capital letters for pronouns that refer to Jesus Christ.  Capitalizing a midsentence "he," "his" or "him" when it refers to Jesus Christ, but not when it refers to other people, is based on doctrinal prejudice rather than on literary convention.  As the Latin proverb goes: Corruptio optimi pessima: The best, when corrupted, becomes the worst.

The decision to capitalize "he," "his" and "him" in reference to Jesus Christ has no basis in the foundational manuscripts.  Koiné Greek, the language from which the New Testament is predominantly translated into our English versions, does not have capital letters (see New Catholic Encyclopedia.  Vol 13, p.  431).  So the not-so-original Greek manuscripts from which the Bible is translated do not refer to Jesus Christ in capital letters.  Rather, Bible translators capitalized "he" and "him" to conform to their doctrinal "makes Jesus look like God" convictions.  Capitalization in Bible translation is more the result of religious conviction than of scholastic accuracy, conceived more out of doctrine than faithfulness to biblical narratives.  For a blatant example, compare Matthew 21:9 with Psalm 118:26.  Psalm 118:26 writes an uncapitalized "he": "Blessed is he who comes in the name of the LORD!" However, when Matthew 21:9 quotes Psalm 118:26, referring to Jesus as the "he" who "comes in the name of the LORD," Bible translators conveniently converted the lowercase "he" of Psalm 118:26 to a capitalized "He" in an effort to make Jesus appear divine.  Lest a person make excuses, this is not a typographical error; Matthew 23:39 duplicates the exaggeration.  This textual manipulation is blatant, clearly indicating that someone has dishonored the text.

Some might defend the Bible on the basis of this being a very small corruption.  But any group who takes the Bible for a book of guidance finds themselves painted into a corner by the biblical caution that, "he who is unjust in what is least is unjust also in much" (Luke 16:10).  How, then, does this quote apply to the Bible scribes and translators? For if they, having been unjust in what is least, means they are, according to their own scripture, "unjust also in much," how can we trust the rest of their work?

One problem is that the Bible presents such different viewpoints that people can design a myriad religions around it.  And in fact, that is exactly what they have done.  Different theological camps have disagreed on which books should be included in the Bible.  One camp’s apocrypha is another’s scripture.  Even among those books that have been canonized, the many variant source texts lack uniformity.  This lack of uniformity is so ubiquitous that The Interpreter’s Dictionary of the Bible states, "It is safe to say that there is not one sentence in the NT in which the MS [manuscript] tradition is wholly uniform."[1]

The fact is that there are over 5700 Greek manuscripts of all or part of the New Testament.[2]  Furthermore, "no two of these manuscripts are exactly alike in all their particulars….  And some of these differences are significant."[3]  Factor in roughly ten thousand manuscripts of the Latin Vulgate, add the many other ancient variants (i.e., Syriac, Coptic, Armenian, Georgian, Ethiopic, Nubian, Gothic, Slavonic), and we have a lot of manuscripts that fail to correspond to one another in critical places, and which even contradict one another at times.  Scholars estimate the number of manuscript variants in the hundreds of thousands, some estimating as high as 400,000.[4]  In Bart D.  Ehrman’s now famous words, "Possibly it is easiest to put the matter in comparative terms: there are more differences in our manuscripts than there are words in the New Testament."[5]

Which is, of course, just one reason why they differ.

In the best of hands, copying errors would be no surprise.  However, by the admission of scholars of Christianity, New Testament manuscripts were not in the best of hands.  During the period of Christian origins, scribes were untrained, unreliable, incompetent, and in some cases illiterate.[8]  Those who were visually impaired could have made errors with look-alike letters and words, while those who were hearing-impaired may have erred in recording scripture as it was read aloud.  Frequently scribes were overworked, and hence inclined to the errors that accompany fatigue.

In the words of Metzger and Ehrman, "Since most, if not all, of them [the scribes] would have been amateurs in the art of copying, a relatively large number of mistakes no doubt crept into their texts as they reproduced them."[9]  Worse yet, some scribes allowed doctrinal prejudice to influence their transmission of scripture.[10]  As Ehrman states, "The scribes who copied the texts changed them."[11]  More specifically, "The number of deliberate alterations made in the interest of doctrine is difficult to assess."[12]  And even more specifically, "In the technical parlance of textual criticism—which I retain for its significant ironies—these scribes ‘corrupted’ their texts for theological reasons."[13]

Errors were introduced in the form of additions, deletions, substitutions and modifications, most commonly of words or lines, but occasionally of entire verses.[14] [15]In fact, "numerous changes and accretions came into the text,"[16]  with the result that "all known witnesses of the New Testament are to a greater or lesser extent mixed texts, and even several of the earliest manuscripts are not free from egregious errors."[17]

In Misquoting Jesus, Ehrman presents persuasive evidence that the story of the woman taken in adultery (John 7:53-8:12) and the last twelve verses of Mark were not in the original gospels, but added by later scribes.[18]  Furthermore, these examples "represent just two out of thousands of places in which the manuscripts of the New Testament came to be changed by scribes."[19]

In fact, entire books of the Bible were forged.[20]  This doesn’t mean their content is necessarily wrong, but it certainly doesn’t mean that it is correct, either.  What we can say for certain is that these weaknesses render the Bible unreliable as preservation of divine revelation.

So which books were forged?  Ephesians, Colossians, 2 Thessalonians, 1 and 2 Timothy, Titus, 1 and 2 Peter, and Jude—a whopping nine of the twenty-seven New Testament books and epistles—are to one degree or another suspect.[21]  Many of the remaining books were authored anonymously.  Incredibly enough, even the gospel authors are unknown.[22]

Now, the list goes on, and those interested in exploring this topic can do so in any of the many books that focus upon this subject, including my own.

Laurence B. Brown, MD, has authored several articles and books and his official website is www.leveltruth.com where he can also be contacted through the ‘Contact’ page.