Description: Ten easy to understand points on the dead sea scrolls from their ancient history to their impact on world politics. 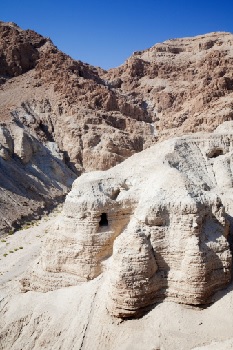 Khirbet Qumran, meaning ‘ruin of’ Qumran, sits on a plateau at the top of an irregular border of limestone cliffs beside the Dead Sea.  Many of these cliffs contain caves which, given their location, are accessible only with difficulty.  To the West lies the Judean Desert, and to the North is a mountain that houses the Qumran caves numbered 1, 2, 3, and 11.

2)    Khirbet Qumran was occupied until 68 CE by the Essene Jews, one of the major schools of Jewish philosophy at that time.  The complex was destroyed in 68 CE.  Ashes from the burned reed‑rooftops and Roman arrowheads found at the site suggest a battle.  The simple fact that nobody returned to recover the scrolls suggests a massacre.  The timing fits, because the Jewish rebellion against the Roman Empire put the two at war from 66 to 73 CE.

3)    Cut to recent history.  In 1947, a Bedouin shepherd discovered seven scrolls in what is now known as Cave 1.  After that, the race was on.  Archaeologists tried to excavate the caves scientifically, while Bedouins plundered them for whatever they could sell.  In 1952, a French Dominican named Roland de Vaux located Cave 4.  That cave contained over 15,000 fragments of over 800 manuscripts.  A year later, an international team of eight scholars was assembled, with De Vaux as project director.  Thirteen years after that, in 1966, De Vaux’s team was publicly accused of obstructing release of the scrolls because the content is contrary to Trinitarian Christianity.

4)    After the Six-Day War in 1967, Israel expanded its border to the Jordan River.  The Qumran complex was in that territory, so became property of Israel.  And so did the scrolls.  In 1972, a Spanish scholar named José O’Callaghan claimed that papyrus fragments from Cave 7 represent some of the New Testament books.  Other scholars disagreed, and claimed the fragments from Cave 7 are too small to know what they represent.  But O’Callaghan’s assertion excited a lot of imaginations.  Here’s why: The Essenes occupied the Qumran complex for over thirty years following Jesus’ ministry, and their complex was less than a day’s walk from Jerusalem.  Yet none of the Qumran Scrolls (i.e., the Dead Sea Scrolls) was New Testament material.  They represent all of the Old Testament books except Esther, but to date, nothing has been found that’s provably New Testament.

5)    So questions arose.  Did the Essenes store New Testament scrolls in a separate place? And if so, why? They were, after all, orthodox Jews.  Unless, of course, some of them were closet Christians.

6)    In 1984, one of the Scrolls’ scholars suggested that the ‘Teacher of Righteousness’ described in the Dead Sea scrolls refers to either Jesus or James, and his opponent, ‘the Man of the Lie,’ a.k.a.  ‘the Wicked Priest’ is .  .  .  drumroll, please .  .  .  Paul! This implies that the Dead Sea scrolls both validate Jesus as a prophet and expose Paul as a corrupter of his teachings.

7)    The first concept threatens Judaism, and the second, Trinitarian Christianity.  Why? Because a Jewish gospel that confirms the prophethood of Jesus would threaten Judaism, and therefore Israel’s national identity.  Similarly, a gospel that exposes Paul as a corrupter of the teachings of Jesus could shake Trinitarian Christianity: Catholic, Orthodox and Protestant churches alike.  Again, why? Because, contrary to what many believe, Paul wasn’t Jesus’ ‘second-in-command.’ In fact, they never even met, yet after he was gone, Paul claimed to speak in Jesus’ name, and the people in power took what he said and canonized it.  But that doesn’t make it true.  Every tenet of Trinitarian Christianity is based on the teachings of Paul, even though Jesus never said he was God, partner with God, or even God’s son.  Nowhere did Jesus teach the doctrines of the Trinity, Crucifixion, Resurrection and Atonement.  All of these tenets came from Paul, or from the Pauline theologians who followed in lockstep.  The teachings of Paul, in fact, contradict the teachings of Jesus, much in the same way that the New Testament informs us of Paul’s conflict with James, Peter and Barnabas.

8)    For example, Jesus taught Old Testament Law.  Paul negated it.  Jesus declared himself the ‘son of man.’ Eighty-eight times.  Pauline theologians labeled him the ‘son of God.’ Jesus taught the oneness of God, and prayer to him alone.  Paul suggested the Trinity and elevated Jesus to the level of intercessor.  Jesus said he was "not sent but to the lost sheep of the house of Israel." Paul proclaimed him a universal prophet.  And the list goes on.

9)    Hence the excitement over the Dead Sea Scrolls.  These scrolls describe a Wicked Priest who opposes the Teacher of Righteousness.  Many scholars believe this "Wicked Priest" was Paul, and the "Teacher of Righteousness" was either Jesus Christ or his brother and disciple, James.  In fact, some scholars believe the Dead Sea Scrolls document Paul’s excommunication from the early Christian church.

10)  So this was the excitement over the Dead Sea Scrolls: If the Gospel of the "Teacher" validated Jesus Christ’s prophethood, it could destroy Judaism.  At the same time, Trinitarian Christianity and all concerned interests would be threatened, because Trinitarian Christianity is based more on the teachings of Paul than of Jesus.  A gospel that differentiates between the two and condemns Paul in the process would upset Trinitarian canon.  Israel, the Vatican, the Anglican Church, and even the American government would be shaken to the roots, since Trinitarian Christianity is the majority religion and a dominant political force.  This makes us wonder: To what lengths would these great world powers go in order to conceal the truths that are not to their liking? Only history, and an honest appraisal of the Dead Sea Scrolls, can answer this question.

exiting and have well info.

Since your last visit
This list is currently empty.
All by date
The Fine Tuning of the Universe
(Read more...)
The Month of Mercy
(Read more...)
VIEW MORE