Description: How idolatry crept into Christianity.  Part 5: Some thought-provoking questions. 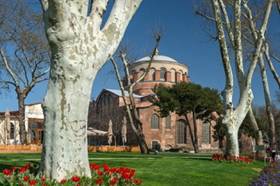 A powerful challenge to Trinitarian thought, initially attributed to Theophilus Lindsey (1723–1804 CE) and subsequently argued by Unitarian Christians worldwide, asks how those who worship Jesus would respond, were he to return and pose the following questions:

a)    Why did you address your devotions to me? Did I ever direct you to do this, or propose myself as an object of worship?

d)   Did I ever call myself God, or tell you that I was the maker of the world and to be worshipped? e) Solomon, after building the temple said, "Will God indeed dwell on the earth? Behold the heaven and heaven of heavens cannot contain thee; how much less this house which I have built" (I Kings 8:27).  So how could God ever have dwelt on earth?

These questions are all the more relevant, for Christians expect that when Jesus returns, he will denounce many "Christians" as disbelievers.  As stated in Matthew 7:21–23,

Not everyone who says to me, "Lord, Lord," shall enter the kingdom of heaven, but he who does the will of my Father in heaven.  Many will say to me in that day, "Lord, Lord, have we not prophesied in your name, cast out demons in your name, and done many wonders in your name?" And then I will declare to them, "I never knew you; depart from me, you who practice lawlessness!"

So if Jesus will disown some Christians who prophesied, cast out demons, and performed wonders in his name (i.e., those who say "Lord, Lord"), who are these disbelievers going to be?

Answer: those who "practice lawlessness" (Jesus’ words, not mine).  And that is the point, isn’t it? For what law did Jesus teach? During the period of his mission, "the will of my Father in heaven" was Old Testament law.  That is what Jesus taught, and that is what Jesus lived by.

So where in his teachings or example did Jesus command servitude and worship of himself? Nowhere!  Just the opposite, in fact, for the Bible records him having taught, "‘You shall worship the Lord your God, and Him only you shall serve’" (Luke 4:8).  Furthermore, Jesus reportedly taught, "Why do you call me good: No one is good but One, that is, God" (Matthew 9:17, Mark 10–18, and Luke 18:19), and, "My Father is greater than I" (John 14:28).

Perhaps for these reasons, Christians focused the first eighteen centuries of their worship on the Father, and the Father alone.  As Joseph Priestly tells us, praying to Jesus is a modern innovation, distant from both Jesus’ teachings and time:

Accordingly, the practice of praying to the Father only, was long universal in the Christian church: the short addresses to Christ, as those in the Litany, "Lord have mercy upon us, Christ have mercy upon us," being comparatively of late date.  In the Clementine liturgy, the oldest that is extant, contained in the Apostolical Constitutions, which were probably composed about the fourth century, there is no trace of any such thing.  Origen, in a large treatise on the subject of prayer, urges very forcibly the propriety of praying to the Father only, and not to Christ; and as he gives no hint that the public forms of prayer had anything reprehensible in them in that respect, we are naturally led to conclude that, in his time, such petitions to Christ were unknown in the public assemblies of Christians.  And such hold have early established customs on the minds of men, that, excepting the Moravians only, whose prayers are always addressed to Christ, the general practice of Trinitarians themselves is, to pray to the Father only.

Now on what principle could this early and universal practice have been founded? What is there in the doctrine of a Trinity consisting of three equal persons, to entitle the Father to that distinction, in preference to the Son or the Spirit?[1]

What is there, indeed? Priestley records a little-known aspect of Christian history: namely, that up to his time (late eighteenth century) the "general practice of Trinitarians themselves is, to pray to the Father only." Those who draw upon their modern Christian experience might mistakenly believe that the twenty-first century practice of praying to Jesus Christ dates from early Christianity.

Nothing is further from the truth.

For nearly eighteen hundred years following the birth of Christianity, prayers were directed only to God.  It wasn’t until 1787 when the Moravian Church, a Protestant sect founded in fifteenth-century Bohemia (in what is present-day Czechoslovakia), underwent a profound Pentecostal transformation and began directing prayers to Jesus Christ.

So why, if the three persons of the proposed Trinity are considered coequal, should such a preference for the Father have prevailed? And not just for a decade or two, but for the first eighteen hundred years of Christianity? Unless, that is, a greater lesson is to be learned from the uniformity of early Christian devotions than from the inconsistencies of Trinitarian theology.

Priestley was just one of many who attempted to prevent the derailing of Christian devotions from the Creator to His creation—Jesus, Mary, the Holy Spirit, and the multitude of saints.  However, no historical analysis of this subject would be complete without noting that Islam has always maintained a strictly monotheistic, iconoclastic faith, as described by Gibbon:

The Mahometans have uniformly withstood the temptation of reducing the object of their faith and devotion to a level with the senses and imagination of man.  "I believe in One God and Mahomet[2]  the apostle of God," is the simple and invariable profession of Islam.  The intellectual image of the Deity has never been degraded by any visible idol; the honours of the prophet have never transgressed the measure of human virtue; and his living precepts have restrained the gratitude of his disciples within the bounds of reason and religion."[3]