Description: How idolatry crept into Christianity.  Part 4: How Christianity further drenched itself into creation-worship. 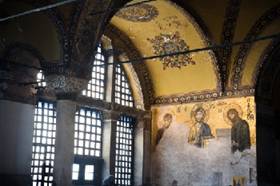 The religious parallels are so obvious as to demand explanation.  We can reasonably question how the cults of Isis and Osiris placed the mark of St.  Andrew’s cross on their consecrated bread two thousand years before St. Andrew was born.  Clairvoyance on the part of the Egyptians, or religious plagiarism on the part of St. Andrew? In addition, there are striking similarities between the mysteries of Pauline Christianity and those of the cults of Isis and Osiris—mysteries to include the virgin birth (Isis the virgin mother, Horus the child) and the atoning sacrifice of Osiris, followed by his resurrection and assumption of the role of redeemer.  Justin Martyr, the famous Christian apologist, dismissed these similarities by claiming that Satan copied the Christian ceremonies in order to mislead the remainder of mankind.[1]  However, taking note of the time sequence, these earlier Eucharistic practices and mysteries of faith preceded those of Catholicism by more than two thousand years.

These facts show that the Eucharist is another piece of Paganism adopted by the Christians.  The story of Jesus and his disciples being at supper, where the Master did break bread, may be true, but the statement that he said, “Do this in remembrance of me,”—“this is my body,” and “this is my blood,” was undoubtedly invented to give authority to the mystic ceremony, which had been borrowed from Paganism.[2]

Invented statements, in the Bible?  How can that be, when all of the gospels record Jesus’ words at the paschal meal? Well, all but one, that is.  According to John 13:1, Jesus was arrested before the Passover feast.  So it’s John against the Synoptics.  Or, to make the contest even, it’s John against Q (abbreviation of the German word Quelle, meaning “source”)—the hypothesized common source document of the Synoptic gospels.

Lest anybody misunderstand, Catholics do not tolerate a symbolic interpretation of their sacramental rites.  The Council of Trent (1545–63 CE) established laws concerning the alleged transubstantiation of the Eucharist, and these laws stand to this day.  Not even the more liberal Second Vatican Council (1962–65) effected a change.  In short, the Council of Trent’s judgment reads:

Canon 1: If anyone denies that in the sacrament of the most Holy Eucharist are contained truly, really and substantially the body and blood together with the soul and divinity of our Lord Jesus Christ, and consequently the whole Christ, but says that He is in it only as in a sign, or figure or force, let him be anathema.[3]

In other words, anyone who considers the bread and wine of the Eucharist to be merely symbolic is to be anathema (i.e., cursed and excommunicated).  This judgment is reinforced by the following:

Canon 6: If anyone says that in the holy sacrament of the Eucharist, Christ, the only begotten Son of God, is not to be adored with the worship of latria, [4]  also outwardly manifested, and is consequently neither to be venerated with a special festive solemnity, nor to be solemnly borne about in procession according to the laudable and universal rite and custom of the holy Church, or is not to be set publicly before the people to be adored and that the adorers thereof are idolaters, let him be anathema.[5]

In other words, those who refuse to adore, venerate, or glorify are to suffer the same fate as those who consider the Eucharist symbolic.  These Catholic laws remain on the books to the present day, which explains why so many Protestant denominations have sidestepped away from their Catholic cousins and either abolished or watered-down their veneration of the Eucharist.  This reaction is particularly easy to understand, for many pagan cultures taught assimilation of the qualities of the ancestral totem through eating “bread transmuted into flesh.” Which group has the real sacred saltine remains the subject of ongoing debate.

Returning to the main subject, the Catholic Church responded to the Synod of Constantinople of 754 CE by calling a second Council of Nicaea in 787 CE.  This council reinstated image worship on the basis that “the worship of images is agreeable to Scripture and reason, to the fathers and councils of the church.”[6]

Suddenly, the theory that certain eighth-century clergy partook of hallucinogenic mushrooms begins to look pretty good.  We have to wonder what apostolic fathers and which scripture this council consulted.  For that matter, exactly how is this decision “agreeable to scripture and reason”?

In any case, those religious communities that objected to Christian idol worship were “cleansed” by the Catholic armies.  Beginning with the slaughter of Unitarian Christians in the mid-ninth century, Empress Theodora gained the dubious distinction of being the one “who restored the images to the Oriental [i.e., Eastern Orthodox] church.”[7]  All subsequent efforts to eradicate images in the church were quashed, resulting in the idolatrous practices witnessed to this day.

Of even greater concern is the adoption of human idols.  Priest-worship surfaced in the early thirteenth century, in the form of priests acting as intermediaries for confession and absolution of sins.  Pope-worship became manifest in the form of ritual kissing of the Pope’s foot or ring.  The creative doctrine of papal infallibility, as defined by Pope Pius IX at the First Vatican Council in 1869–1870, set the pope as rival with God.  The worship of Mary and the title “Mother of God” were canonized considerably earlier, at the Council of Ephesus in 431 CE.  Directing prayers to saints, angels and the Virgin Mary was officially sanctioned from the early seventh century.  The famous prayer to the Virgin Mary, Ave Maria (Hail Mary), lagged a thousand years behind, and received official formulation in the reformed Breviary of Pope Pius V in 1568.  However, among all the human subjects of worship, Jesus Christ is hands down the most worshipped mortal ever to have walked the earth.

I have always appreciated the information found in Islam regarding early Christian history. Earlier in my life I stayed for short periods of time at a Benedictine Roman Catholic monastery, where at the end of each day all the monks and guests would gather round a tall black statue of the Virgin Mary and sing songs. In my conscience then, I knew it was a terrible idolatry, even though in many ways, I liked the life of the monks. I can honestly say that I am closer to Islam than any other religion. Islam cares. Islam cares about society and this is evidenced by the fact that Allah has provided clear healthy and honorable directions for how to live life and relate to one another. There is good and evil. But we live in a time in which in many parts of the world, good is called evil, and evil is called good. There is One God, and to worship, or pray before, or venerate any other person or object is idolatry and it is evil. But to worship the One God is good and beautiful with many rewards and a healthy society if more people would know.