Description: How idolatry crept into Christianity.  Part 3: How an effort by the Emperor of Constantinople, Leo III to destroy images was dampened.  Striking parallels between the teachings of Christianity and some ancient civilizations. 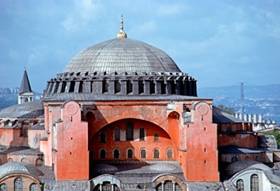 It was the contact with Mohammedanism which opened the eyes of Leo and the men who stood around his throne, ecclesiastics as well as laymen, to the degrading and idolatrous superstitions that had crept into the Church and were overlaying the life of a religion which, at its proclamation the purest and most spiritual, was fast becoming one of the most superstitious and materialistic that the world had ever seen.  Shrinking at first from any representation whatever of visible objects, then allowing herself the use of beautiful and pathetic emblems (such as the Good Shepherd), in the fourth century the Christian Church sought to instruct the converts whom her victory under Constantine was bringing to her in myriads, by representations on the walls of the churches of the chief event of Scripture history.  From this the transition to specially reverenced pictures of Christ, the Virgin and the Saints, was natural and easy.  The crowning absurdity and blasphemy, the representation of the Almighty Maker of the Universe as a bearded old man, floating in the sky, was not yet perpetrated, nor was to be dared till the human race had taken several steps downward into the darkness of the Middle Ages; but enough had been already done to show whither the Church was tending, and to give point to the sarcasm of the followers of the Prophet when they hurled the epithet “idolaters” at the craven and servile populations of Egypt and Syria.[1]

The irony of Emperor Leo’s transition from victor over the Saracens in Eastern Europe to Leo the Iconoclast is inescapable.  After he defeated the Muslims, he adopted their drive to abolish idolatry.  In any case, Pope Gregory II attempted to dampen Leo’s enthusiasm with the following counsel:

Are you ignorant that the popes are the bond of union, the mediators of peace between the East and West?  The eyes of the nations are fixed on our humility; and they revere, as a God upon earth, the apostle St.  Peter, whose image you threaten to destroy .  .  .  Abandon your rash and fatal enterprise; reflect, tremble, and repent.  If you persist, we are innocent of the blood that will be spilt in the contest; may it fall on your own head.[2]

As George Bernard Shaw stated in the preface to his play, Saint Joan, “The Churches must learn humility as well as teach it.”[3]  No doubt the person who shouts, “Look at how humble I am! Can’t you tell I’m the most humble person you ever saw?” is instantly disqualified.  More to the point, the pope who sanctioned images while at the same time stating, “But for the statue of St.  Peter himself, which all the kingdoms of the West esteem as a god on earth, the whole West would take a terrible revenge”[4]  should perceive an asteroid-sized theological inconsistency.  Exactly who should “reflect, tremble and repent” should be boldly obvious.

That Pope Gregory II and his followers were willing to wage war in defense of their images testifies to the extraordinarily high value (that is to say, the worth, the worthiness—i.e., the worship) they placed on these images.  And spill blood they did, to such an extent that the defeat of Leo’s army at Ravenna turned the waters of the river Po red.  So badly was the river polluted that “during six years, the public prejudice abstained from the fish of the river .  .  .”[5]

When the Synod of Constantinople convened in 754 CE, the Roman Catholic Church staged a boycott due to non-conformity of the Greek Church with Catholic teaching.  Or at least, that was the excuse they offered.  A more likely scenario, perhaps, was that the Catholics recognized their inability to defend a practice that was scripturally condemned by the Almighty God they claimed to worship.

Nevertheless, the Synod of Constantinople convened without them and after a serious deliberation of six months the three hundred and thirty-eight bishops pronounced and subscribed a unanimous decree that all visible symbols of Christ, except in the Eucharist, were either blasphemous or heretical; that image worship was a corruption of Christianity and a renewal of Paganism; that all such monuments of idolatry should be broken or erased; and that those who should refuse to deliver the objects of their private superstition, were guilty of disobedience to the authority of the church and of the emperor.[6]

The fact that the synod exempted the Eucharist from association with paganism is particularly curious to those knowledgeable of ancient Persian and Egyptian rites and rituals.  The Persians employed consecrated water and bread in the ancient cult of Mithras.[7]  As T.  W.  Doane notes in his 1971 study, Bible Myths and Their Parallels in Other Religions,

It is in the ancient religion of Persia—the religion of Mithra, the Mediator, the Redeemer and Saviour—that we find the nearest resemblance to the sacrament of the Christians, and from which it was evidently borrowed.  Those who were initiated into the mysteries of Mithra, or became members, took the sacrament of bread and wine.  .  .  .

This food they called the Eucharist, of which no one was allowed to partake but the persons who believed that the things they taught were true, and who had been washed with the washing that is for the remission of sin.  Tertullian, who flourished from 193 to 220 A.D., also speaks of the Mithraic devotees celebrating the Eucharist.

The Eucharist of the Lord and Saviour, as the Magi called Mithra, the second person in their Trinity, or their Eucharistic sacrifice, was always made exactly and in every respect the same as that of the orthodox Christians, for both sometimes used water instead of wine, or a mixture of the two.[8]

The cult of Osiris (the ancient Egyptian god of life, death, and fertility) offered the same allure of an easy salvation as did Paul’s concept of salvation through the atoning sacrifice of Jesus.  “The secret of that popularity was that he [Osiris] had lived on earth as benefactor, died for man’s good, and lived again as friend and judge.”[9]  The ancient Egyptians commemorated Osiris’ birth with a cradle and lights and annually celebrated his alleged resurrection.  They also commemorated his death by eating sacred bread that had been consecrated by their priests.  They believed this consecration transmuted the bread to the veritable flesh of Osiris.[10]  If it all sounds familiar, it should, for as James Bonwick comments, “As it is recognized that the bread after sacerdotal rites becomes mystically the body of Christ, so the men of the Nile declared their bread after sacerdotal rites became mystically the body of Isis or Osiris: in such manner they ate their god.”[11]

The cakes of Isis were, like the cakes of Osiris, of a round shape.  They were placed upon the altar.  Gliddon writes that they were “identical in shape with the consecrated cake of the Roman and Eastern Churches.” Melville assures us, “The Egyptians marked this holy bread with St.  Andrew’s Cross.” The Presence bread was broken before being distributed by the priests to the people, and was supposed to become the flesh and blood of the Diety.  The miracle was wrought by the hand of the officiating priest, who blessed the food.[12]